Recent Conflicts Between Israel and Her Neighbors 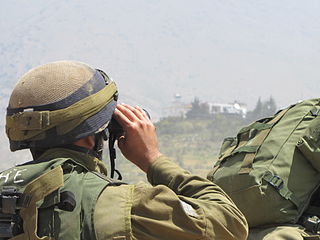 The Second Intifada, also known as the Al-Aqsa Intifada, began in late 2000 and lasted approximately five years. Reports state that the violence began with Israeli opposition leader Ariel Sharon's visit to the Al-Aqsa Mosque. Viewing this visit as a provocation, Palestinians held massive demonstrations and hurled rocks at Israeli police forces, who in turn responded with rubber and live ammunition to disperse the crowd.

The Israeli government maintains that this was not a spontaneous outburst of violence as a result of Sharon's visit, but that it was a planned uprising resulting from Palestinian anger over the failure of the peace process. They believe that the Palestinian leadership planned the violent demonstration aimed at incurring Palestinian casualties to regain diplomatic leverage. Israel points to evidence that in the days after Sharon's visit, the Palestinian Authority closed schools and coordinated the busing in of demonstrators, as well as statements made by Palestinian leadership that the campaign of violence was planned as early as July 2000, when Chairman Arafat was the focus of international criticism for rejecting Barak's offer without offering a counter-proposal. The Palestinian Authority rejects this view, and maintains that the Israeli police's excessive use of force to quell the violent demonstrators was the breaking point in already flaring Palestinian tension against Israel.

What followed was a period of sustained violence that resulted in over 1,000 Israeli casualties and 5,500 Palestinian casualties. The Palestinians mounted a series of terrorist attacks against Israeli civilians, the most successful being suicide bombings. Israel responded with targeted incursions inside the West Bank and Gaza. There was no official ending to the Intifada, as several major events lessened the violence. Chairman Arafat died in late 2004, a few months after Israel announced it would unilaterally disengage from the Gaza Strip (which it did in 2005). The Sharm el-Sheikh Summit in 2005 resulted in Palestinian President Mahmoud Abbas declaring that violence would come to an end, and PM Sharon agreeing to the release of 900 prisoners and withdrawal from some West Bank towns.

Palestinian Elections and the Fatah-Hamas Conflict

Palestinians voted for parliament for the first time in 10 years in 2006. Hamas won the election with 74 seats, with ruling-party Fatah earning only 45. This was a surprise to many around the world, as Fatah was the party of longtime leader Yasser Arafat and pre-election polls gave it a commanding lead. Shortly after Hamas' victory, a civil war broke out between Hamas and Fatah for control of the territories. It is estimated that as many as 600 Palestinians were killed in the fighting.

The clashes ultimately led to a split, with Hamas ruling the Gaza Strip and Fatah ruling the West Bank. Furthermore, economic sanctions were imposed upon the Palestinian territories in reaction to citizens' overwhelming support for a terrorist organization.

Reconciliation between the two groups has stalled, mirroring the Israeli-Palestinian peace process. Israeli PM Netanyahu opposes reconciliation, as it would give legitimacy to Hamas and allow them to influence the peace process. The new regime in Egypt has been working with Hamas and Fatah to formulate and implement a deal that, while brokered on paper, has never been actualized on the ground.

Very soon after Israel disengaged from Gaza, Palestinian militants began firing Qassam rockets into the South of Israel. Between 2005 and 2007, approximately 2,700 rockets were fired. In addition to causing widespread, long-lasting trauma to southern communities, especially Sderot, the attacks killed over 100 Israelis. Furthemore, Hamas and other militant groups built underground tunnels to both obtain weaponry and other supplies and to kidnap Israeli soldiers like Gilad Shalit. The first Israeli raid on Gaza began with the intention of destroying these tunnels. At the same time, rocket fire began increasing to pre-ceasefire levels and the conflict escalated. Israeli carried out airstrikes, ground invasions and naval attacks, while Palestinians continued to fire rockets and carry out urban warfare. Egypt worked with both sides to create a ceasefire in the end. The war was considered an Israeli tactical victory, however, due to the high number of Palestinian casualties, its reputation suffered greatly abroad.

As mentioned above, prior to Operation Cast Lead in 2006, Hamas kidnapped IDF Corporal Gilad Shalit using underground tunnels into Israel. Hamas held Shalit for five years without any visitation rights by international humanitarian groups, in violation of international law. He was finally released in late 2011, in exchange for 1,027 Palestinian prisoners.

The Second Lebanon war began in the summer of 2006 between the IDF and Hezbollah when Hezbollah militants ambushed Israeli soldiers patrolling Israel's side of the border fence. During the course of 34 days, Hezbollah fired over 100 rockets per day into Israel and engaged in guerilla warfare, while Israel launched a series of attacks from the air, sea and land.

Due to the high level of civilian casualties and infrastructure destruction, protests formed around the world calling for an end to hostilities. The United Nations brokered a ceasefire, resulting in increased UNIFIL (United Nations Interim Force in Lebanon) troops on the ground and Israel's withdrawal from the Lebanese border. The war was declared a victory by both sides.

In the spring of 2010, six ships of the "Gaza Freedom Flotilla" attempted to break Israel's blockade of Gaza. Organized by the Free Gaza Movement and the Turkish IHH, the ships left from Turkey, Greece and Cyprus and moved toward Gaza's maritime border. Israel repeatedly warned them that doing so was a provocation and sent in the navy to persuade the activists to hand over the humanitarian equipment they claimed to be carrying so the IDF could bring it to Gaza. Israeli commandos boarded the ships while they were still in international waters- most of the ships' activists employed passive resistance, but the Turkish ship, Mavi Marmara, violently resisted, resulting in the deaths of nine activists. In addition, ten Israeli commandos were wounded, one severely.

This incident led to widespread condemnation of Israel around the world, and Turkey demanded a formal apology for the death of its citizens. Israel refused, citing that the activists had clearly been looking to violently confront the soldiers, and their relationship has been severely strained ever since. A subsequent United Nations report on the incident determined that though the blockade of Gaza is legal under international law, Israel used excessive force against civilians in protecting the blockade. Furthermore, the report raised questions about the supposedly peaceful intentions of the activists.

After a few months of relative peace in Israel’s south, Hamas militants in the Gaza Strip began firing a barrage of rockets sent from Iran in November, 2012. 1,500 rockets were fired from November 14 until the end of the conflict. In the areas of Israel closest to Gaza, people had only 15 seconds to find shelter when the tzevah adom (code red) sounded. Some of the kibbutzim in the area did not even have warnings because they were in the range of mortar fire, which has terrorized these communities for years.

In response to these attacks, URJ President Rick Jacobs said, “"We have long made clear our distress at the barrage of rocket fire from Gaza targeting Israelis, and just a few weeks ago called on the international community to pressure Hamas to bring an end to the attacks. Instead, the rocket fire from Gaza has increased, necessitating Israeli military action. We are, as ever, greatly saddened by the loss of innocent lives – Israeli or Palestinian – and hope that the military operation can be completed with speed and in a way that minimizes the loss of life. We in the Reform Movement continue to pray and advocate for the safety of Israelis who have for too long been the targets of violent and unremitting rocket attacks."

In retaliation, Israel killed the head of Hamas’ military operation in one of a series of surgical airstrikes in the area. Hamas increased its attacks, and for the first time was able to send rockets as far as Tel Aviv and Jerusalem. As the Egyptian government was negotiating a ceasefire, the conflict escalated to the point where Israel called up 75,000 reservists in the IDF to prepare for a ground invasion. In order to prevent the conflict from escalating into an all-out war, Ban-Ki Moon and Hilary Clinton headed to the region to participate in negotiations.

In response to the ceasefire, Union for Reform Judaism President Rabbi Rick Jacobs put out the following statement:

We welcome news of a cease-fire between Israel and Hamas, and pray that it may serve as a foundation for long-lasting peace.

For years, and increasingly in the past week, Israel has lived under a barrage of rocket fire from the Hamas-controlled Gaza Strip, as well as other heinous attacks, such as today's bus bombing, directly targeting civilians. Israel's first responsibility is to protect her citizens, and we are saddened that mounting terrorist attacks necessitated military action.

I am in Israel meeting with Israeli leaders, our Reform Movement, and those affected by the violence and have seen first hand the enormous toll these attacks have taken on Israelis across the country, including those who have been killed or injured, whose lives are threatened by the rockets, and those who have been called up for duty, or who have sent loved ones to the front.

We are grateful that Israel has been able to conduct this campaign without a ground incursion, and praise the deliberate care and caution with which Israel targeted its efforts, with the goal of minimizing civilian casualties. Despite these efforts, we are distraught by the deaths of innocent civilians on both sides who want nothing more than to live in peace and security.

We commend the governments of the United States and Canada for their steadfast support for Israel's security, and particularly thank President Obama and Secretary of State Clinton and Egyptian President Morsi for their active involvement in achieving a cease-fire. Yet again, it is clear that the U.S. must play a central role in advancing a long-term peace agreement between Israelis and Palestinians.

We continue to pray for stability and security for all in the region, and hope for the day where we can be thankful that two states will live side by side in prosperity and peace.