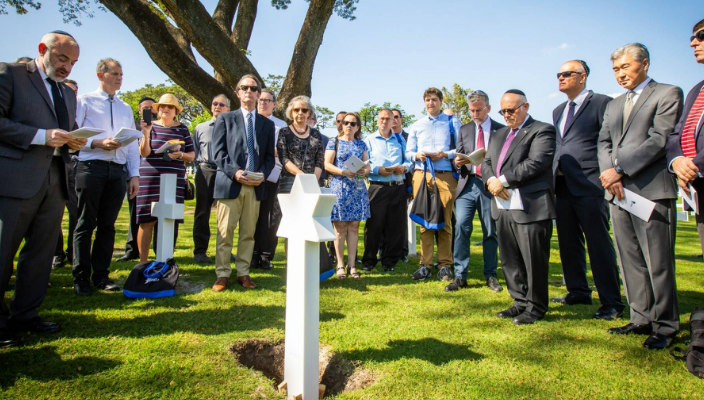 How many Jewish members of the military have been buried under grave markers that incorrectly represent their religion and heritage? Operation Benjamin is doing its best to find and reverse such errors.

The organization is dedicated to researching American military cemeteries abroad to determine where cross headstones have been erroneously erected over the graves of U.S. Jewish servicemen and women instead of Stars of David. Once identifying and reversing the error, they hold gravesite rededication ceremonies with family members of the deceased.

We caught up with two of the organization’s founders, Shalom Lamm and Steve Lamar, to learn more about Operation Benjamin’s origins, methods, and accomplishments.

ReformJudaism.org: How did the idea for Operation Benjamin come about?

Steve Lamar: While visiting the American military cemetery in Normandy, France, Rabbi Jacob J. Schacter – a professor of Jewish history at Yeshiva University and the third founder of Operation Benjamin – had a hunch that the number of Star of David headstones were underrepresented.

He consulted his friend and military historian, Shalom Lamm, who, after some preliminary research, agreed. They decided to do something about it.

Your organization is named after Pvt. Benjamin Garadetsky, the first Jewish soldier you identified as having been buried under a cross. What is his story?

Shalom Lamm: He grew up in the Bronx, N.Y., the son of Jewish immigrants from Ukraine. In 1941, at age 26, he enlisted in the U.S. Army to fight the Nazis and served as a medic with the 66th Armored Corps. He was killed in France on August 23, 1944, in a Luftwaffe bombing attack and, for reasons we might never know, was buried under a cross in the Normandy cemetery.

We chose to test our theory on Benjamin Garadetsky because the name sounded Ashkenazi Jewish, but his marker bore a cross. We were amazed to discover that his parents and sister were buried in an exclusively Jewish cemetery about 10 minutes from my house in Long Island, N.Y.

The error was finally corrected on June 20, 2018, when Rabbi Schacter and Steve joined family members, friends, and officials from the American Battle Monuments Commission (ABMC) in a moving rededication ceremony at the gravesite of Pvt. Garadetsky.

How could such mistakes have happened in the first place?

Lamm: Many were simply clerical errors. It was also not uncommon that Jewish soldiers didn’t want a Jewish identification on their dog tags because of the terrible consequences they would face if captured by the Nazis.

What does it take to have a marker changed?

Lamar: We first have to definitively prove that the soldier was Jewish, and then find a living family member to make the request to have the marker changed.

How many other Jewish soldiers with wrong markers have you discovered to date?

Lamar: We've made 11 requests to the ABMC, and all of them have been approved. Eight have already been changed, starting with Pvt. Garadetsky.

Last year we worked with the ABMC to change the markers for two brothers, Charles and Frank Solomon, airmen who were killed within a few months of one another. Charles is buried in Normandy and Frank is buried in the Ardennes American Cemetery in Belgium, where the Battle of the Bulge was fought.

And in February 2020, we held a ceremony in the Manila American Cemetery in the Philippines for five soldiers who died in the Pacific theater.

How many more soldiers do you suspect may have been mistakenly buried under the wrong marker?

Lamm: It’s difficult to estimate, but we put the number in the 250-500 range – and given how much effort goes into each case, I think I’ll be 700 years old before we’re done.

How do you go about identifying these cases?

Lamar: We start with the unscientific method of looking for Ashkenazi-sounding names on markers in the shape of a Latin cross. Then comes extensive genealogical research, examining such databases as the rosters of WWII dead, Jewish servicemen’s cards, Ellis Island immigrant lists, U.S. Census reports, and many other resources.

How have families reacted when you contacted them?

Lamm: They would say things like, “My parents just could never talk about it. Every time we mentioned Uncle Jack's name, they would dissolve in tears” – so they knew precious little about the soldiers, but felt a gaping sense of loss.

Can you tell us about a particularly memorable moment at one of the gravesite rededication ceremonies?

Lamm: One of the family members attending the rededication ceremony in Manila was Rabbi John Alan Franken, who was named after an uncle buried there under a cross. At each grave, we had members of the family participate by reciting a poem, the El Malei Rachamim prayer or the Mourners’ Kaddish; Rabbi Franken did them all in an extremely moving way.

He also offered an unforgettable insight when he said that we have performed not only a chesed shel emet, a kindness for the dead that can’t be repaid, but also a chesed v’emet, correcting the historical record to make it truthful.

He said, “There was always this gnawing uneasy question of why was [Uncle] Allan buried under a cross? What happened? We now know the emes, the truth. It was just a mistake. It never should have happened, and we have now cleansed the record.”

Why is the mission of Operation Benjamín so important?

Lamar: At a time when we are experiencing a rise in antisemitism, it's important that the contributions of the 11,000 American Jewish service members who made the ultimate sacrifice for their country be recognized.

As we approach the 75th anniversary of the end of World War and of the liberation of the camps, we should not lose sight of the fact that these individuals died fighting the forces of hatred.