Creating a Culture of Kindness

Dr. Bruce Powell has helped to found and lead 3 Jewish high schools, has consulted on the founding of 23 more throughout North America, and serves as president of Jewish School Management (JSM), providing consulting services to Jewish day schools.

Dr. Ron Wolfson is the Fingerhut Professor of Education at American Jewish University and president of The Kripke Institute. He is a consultant and lecturer on building relational cultures in educational institutions and is the author of many books, including Relational Judaism, God’s To-Do List and The Seven Questions You’re Asked in Heaven.

I sat down with Dr. Powell and Dr. Wolfson via Zoom to discuss their significant new book, Raising A+ Human Beings: Crafting a Jewish School Culture of Academic Excellence and AP Kindness (The Kripke Institute).

What motivated you to write Raising A+ Human Beings and why now?

Wolfson: The main motivation is to offer a set of principles to shape a culture of kindness and compassion in education. This is a timely conversation because there's so little kindness in our civic discourse. The idea of even listening to each other as human beings is something of an anachronism today. We need to listen to the other and that is possible only when we believe the other is created b'tzelem Elohimb'tzelem Elohimבְּצֶלֶם אֱלֹהִיםLiterally "in the image of God;" the concept—from Genesis 1:27: “God created humankind in God’s image”—that because all humanity is created in the image of God, each person is equally valued.  , in the image of God, when we see in them the spark of divinity. The watchword of Judaism is Sh'ma YisraelSh'maשֵׁמַע Jewish affirmation of belief in one God. Lit. "Hear/Listen/Understand." The affirmation of God's unity is found in Deuteronomy 6:4. – “Listen, People of Israel” -- not Daber Yisrael, Speak your talking points.

What is your target audience?

Powell: We initially geared the book for heads of Jewish day schools, but it soon became clear to us that it is just as relevant for teachers, parents, maintenance and security staff, and board members.

Wolfson: When you can shape a book to be a community read, everyone in your organization is literally on the same page. Institutional transformation can’t work if the person at the top simply says, “Now we're going to do this.” A culture is changed when everybody is speaking the same language, understands each other, and has a goal. The goal of Jewish education, as defined by Bruce, is to raise A+ human beings.

You encourage teachers to share their own life experiences with students. What role did your parents play in your ethical development?

Wolfson: I learned the meaning of chesedChesedKindness (loving kindness) by watching how my parents, Bernice and Alan, z”l, treated others. They developed a wonderful relationship with a young woman named Ruby, who was confined to an iron lung after being stricken with polio. Every year they invited kids from Boys Town to our Passover seders. My mother worked with blind people through a small group at our synagogue, and my father always passed along books he'd read to others. I call this “relational kindness.”

Powell: I worked for 11 years in my father's service station and watched how he treated customers who fell behind in their payments with dignity, respect, and honesty. He extended credit to people who were just starting their own businesses, and they never failed to honor their debt when their businesses got up and running.

My mother used to go door to door in the Jewish community collecting money for ORT, a Jewish occupational training organization.  She told me how one time she made the mistake of asking a woman, “Can you give me only $5?” The woman responded, “What do you mean “only” $5, for me that is a lot of money.” The lesson: When asking, be sure to consider the dignity of the person being asked. Never assume that you know their financial circumstances. Give the donor power and a way to exit the conversation. Say, “Could you consider a gift today?” And most importantly, truly know the person standing before you.

When you first walk into a Jewish school, what are some of the clues that it's a place that nurtures a culture of kindness?

Powell: There are a lot of clues. For instance, at the entrance of a school outside of Washington, DC, I saw the security guard greeting 600 kids from kindergarten to high school by name. There's a culture of kindness and welcoming embrace.

Upon entering a building, I observe what’s on the walls. In an English class, I want to see at least a dozen quotes from authors of all stripes. On the walls of a Jewish studies class, I want to see quotes from Jewish sacred texts and/or portraits of Jewish influencers worthy of emulation for their scholarship and kindness. I once read a quote by Heschel on the wall of a school that I adopted for my school: “When I was young, I admired and valued people who were clever; now that I'm old, I value people who are kind.”

Wolfson: You can tell immediately when you walk into a place if people are engaged with each other and treating each other kindly. Are teachers isolated in their own rooms or collaborating? In the lunchroom or playground are any kids sitting or standing around by themselves? In an inclusive school, all children are involved in small group activities.

Powell: When the teachers create an atmosphere of kindness and a welcoming embrace, kids do better academically. The study of a subject can be very challenging, but when you treat your students with dignity and kindness, they will rise to the occasion.

Dr. Powell, in your office and classrooms you displayed the six questions God will ask us when we pass from this world. What’s the significance of doing this?

How do you define wisdom?

Powell: Wisdom is knowing how to take knowledge and surround it with a Jewish ethical framework so that you don't abuse that knowledge. So when I say wisdom, it's really another code word for having a Jewish values lens through which to look at the world. 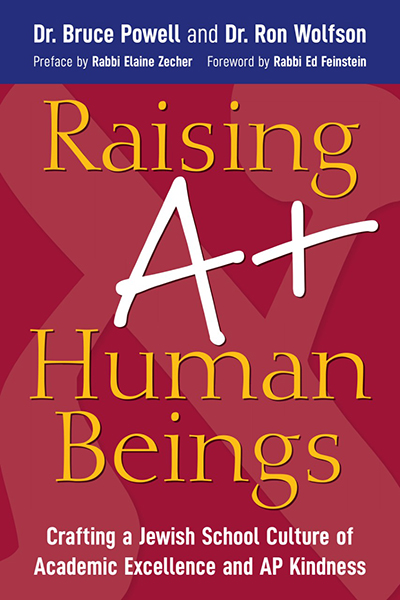