Book Review: On a Clear April Morning: A Jewish Journey

On a clear April morning in the early 1900s, Brazilian poet and author Marcos Iolovitch’s father, Yossef, a merchant in Russia, saw “beautiful brochures with colored illustrations describing the excellent climate…of a vast and faraway country of America.” Homesteads on favorable terms were being offered to “all those who wished to become farmers.” Having always interested in agriculture and dreaming of a better life, Yossef took up the offer of the Jewish Colonization Association, funded by the Wealthy Belgian railway magnate and philanthropist Baron Maurice de Hirsch, and embarked with his family on a long and difficult sea voyage to the new Promised Land of Brazil.

Baron de Hirsch had acquired land in a sparsely populated area of Argentina and in the Rio Grande de Sul area of Brazil with the idea of settling European Jews on farmland to improve their lives by making them more self-sufficient.

The Iolovitch family and the other Jews did not know how to farm. They were given no training or support, so they did not stay long on the settlement, where they lived in miserable conditions. The family moved to Porto Alegre in 1916, even then a modern, thriving city of 150,000 with theaters, a library, beautiful public squares and buildings, excellent educational institutions, and an active cultural life.

The unnamed narrator of the biographical novel On a Clear April Morning: A Jewish Journey is Iolovich himself, who takes us on his physical, psychological, and emotional journey. In first-person voice, he relates the deaths of two younger brothers, his family’s poverty and misery, and his father’s descent into alcoholism.

Yossef and his sons try to earn a living as peddlers of various goods, an endeavor that didn’t require knowing the language. The family moves to various other locations in Argentina, but, with no improvement in their lives, eventually returns to Porto Alegre.

Life at home was dragging along full of troubles and hardships. No merciful ray of light came to cheer up our sad and somber existence. Our own pains and sorrows constantly embittered each of us… The windows and doors remained almost always closed so as not to show the world the intimate dramas that unfolded inside. And we endured with stoic resignation, in anguished silence, the humiliation of our misfortune that during many years made us shed bitter tears of quiet desperation. Besides poverty, destiny gave us a cross too heavy to bear, the cross of shame. My father drank, which caused us intense suffering.

Overcoming obstacles, the boy manages to make friends outside the Jewish community, often navigating antisemitism, and, despite abject poverty, pursues an education, sometimes in Catholic institutions as well as a traditional Jewish cheder. He works as a butcher, in a small grocery store, and in a pharmacy. He falls in love a few times. A description of his feelings for one of the women illustrates Iolovitch’s gift of elegant language:

I couldn’t forget Sonia, who came to dominate my whole being with the strength of a genuine obsession. Her image never left me, not even for a second. I saw her in everything and everywhere. She was on the page of the book that I opened. On the blank sheets of paper that I touched. In the paleness of the moon and in the radiance of the stars. I sensed her soul in the perfume of the flowers. And I felt her hands in the caress of the breeze.

As he comes of age, he enrolls in night school and explores the few professions open to him. He eventually settles on law. He doesn’t like it but explains that it’s the only choice that requires no class attendance, allowing him to work during the day. He needs only to pass the final examination.

He thrives on the rich cultural life of the city, bonding with other young intellectuals.

He becomes a poet and essayist concerned with social justice and is soon well- known in Brazil and the wider literary and philosophical intellectual world.

On a Clear April Morning was first published in 1940. A great fan of Iolovitch, the contemporary Brazilian author Moacyr Scliar brought it to the attention of Merrie Blocker, a former U.S. Foreign Service officer in the Rio Grande de Sul area of Brazil. She embarked on this newly published translation. The prefaces by Scliar and Blocker, and an extensive afterword by Blocker, inform the reader in fascinating detail of attempts to settle Jewish immigrants on farms in South America and trace Iolovich’s connection to the larger outside philosophical world, his literary development, and fame. Voluminous notes and an extensive bibliography also contribute to the book’s value.

In this very interesting Jewish immigration story, Iolovitch throws light on Jewish emigration and life in South America (as does the novel Exile Music), describing Jewish emigration to Bolivia in the 1930s – another agricultural experiment that saved 10,000 European Jews from the Holocaust.

The poetic language of Iolovich in this novel is very readable and well worth the time. 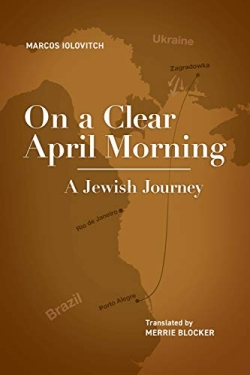