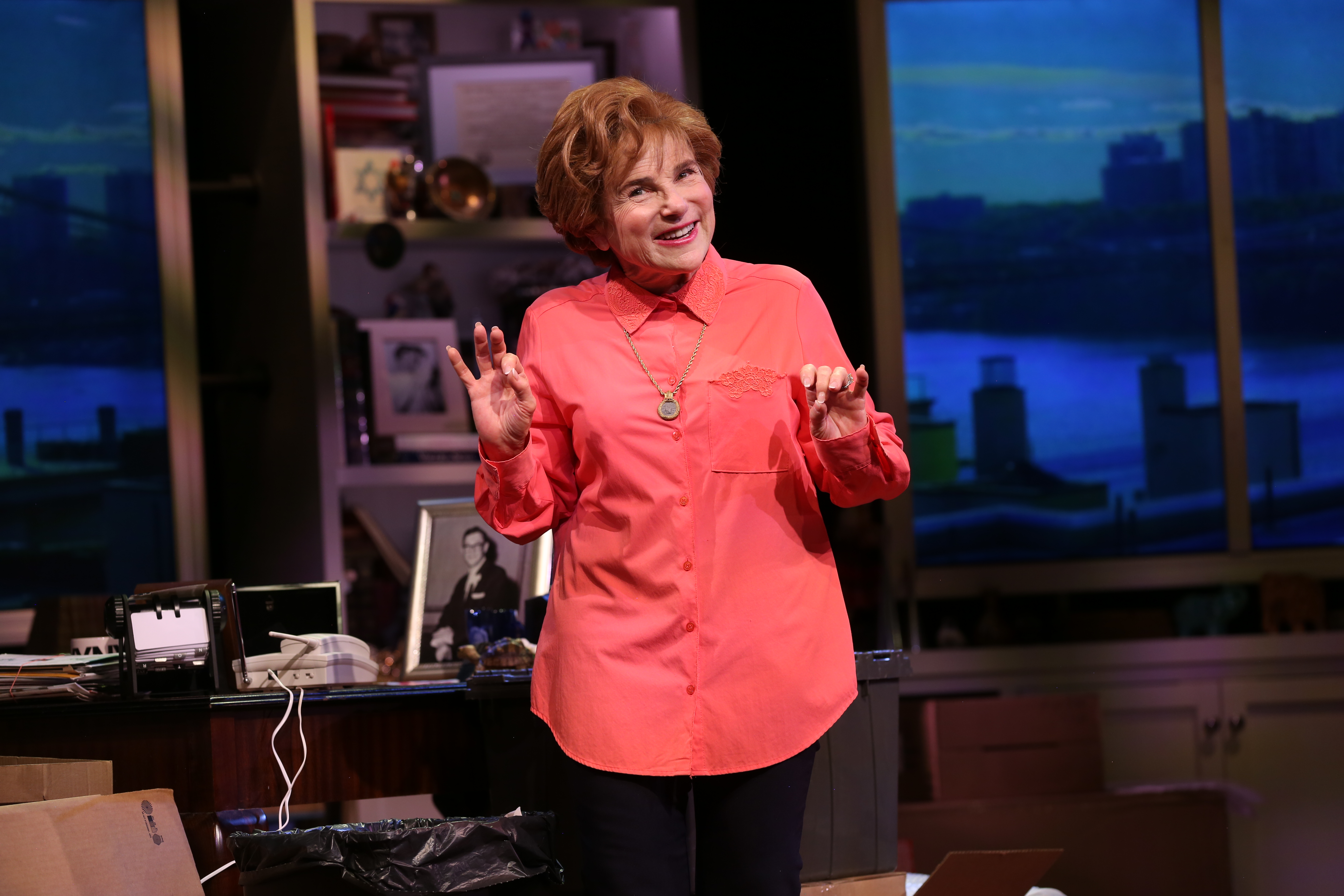 "Becoming Dr. Ruth" carefully and quite literally unpacks the turbulent early years of Dr. Ruth Westheimer -- Holocaust survivor, single mother, and eventual superstar sex therapist. At the same time, this one-woman show starring Tovah Feldshuh celebrates the possibilities of America, while never quite letting go of the past.

We meet Dr. Ruth in her apartment overlooking the Hudson, crammed with trinkets, tchotchkes, and stacks of boxes. She's moving from her apartment as she sifts through her accumulated belongings to decide what to keep. This provides an opportunity for her to pause and reflect on each item, carrying us with her through the years. She is interrupted by calls from her children who try to convince her to stay, and from the mover, who she's more than happy to give advice to about penis size.

Tovah Feldshuh is no stranger to inhabiting strong female Jewish icons like Ruth Bader Ginsberg and Golda Meir. Feldshuh's Dr. Ruth is a lively spirit, scampering around the room delivering gleeful sexual aphorisms in her signature high-pitched German accent. At times Ruth becomes more serious, reflecting on her childhood in Germany before WWII. In these moments, Feldshuh's voice drops a register, as if reaching into her guts to dredge up the pain of those years. The play moves quickly between tragedy and glee, never dwelling too long in sadness or becoming too ebullient before reminding us of all that this woman has endured.

Feldshuh manages these turns with ease as well as inhabiting other figures in Ruth's life, from the Swiss matron who took her in along with other Jewish refugee children to the hilarious "New Yawk" nurse who tells her, if she didn't want a C-section, she should've thought of that nine months ago.

The play covers a lot of ground, touching on Ruth's early years in Germany and Switzerland to the kibbutz she stayed on in Palestine to Paris and then to America. Along the way, we meet her lovers, her husbands (she's had three) and get the measure of a woman who just won't quit. Determined to earn her PhD, she's denied by the all-male dissertation committee twice. But like the weeble-wobble toy she holds at one point, she always pops right back up no matter how many times she's knocked down.

The storytelling is aided by a multimedia backdrop that switches from the view out of her apartment window to actual photos of her mother and father, husbands, and of Ruth herself at her various stops in life. In contrast to the clutter on stage, the photos focus us on the real people behind the tales, appearing like mournful apparitions. When Ruth longs for her parents at her wedding or graduation, we can picture exactly who she's hoping could be there.

Playwright Mark St. Germain does a good job teasing the major questions about Ruth's life early in the play and letting that anticipation build as it progresses. The whereabouts of her parents serve as the undercurrent, even as we eagerly await the destination, the moment she becomes the Dr. Ruth.

When the time does come, it doesn't disappoint, allowing Feldshuh to shine as Ruth's on-stage persona. We listen in on various calls as we see Dr. Ruth offer her special brand of cheerful straight-talk on her first radio show, Sexually Speaking. The calls, most likely real or close approximations, are fascinating, as are her candid responses. This viewer could've gone on listening to her for hours. The radio show is soon syndicated nationally, which leads to TV appearances, making even David Letterman blush, and to her own cable show,

Bubbly and funny one moment, touching the next, Tovah Feldshuh's Dr. Ruth is more than the chipper sex-positive enthusiast of TV and radio. By giving us the full scope of her life, triumph and pain, "Becoming Dr. Ruth" allows us to understand the astounding true story of a remarkable woman.

Through Jan. 2 at The Museum of Jewish Heritage, Manhattan. Running time: 90 minutes.

END_OF_DOCUMENT_TOKEN_TO_BE_REPLACED

"I don't need their good opinions, I have plenty of opinions.
Holocaust
Image

What does it mean to remember? It is to live in more than one world, to prevent the past from fading, and to call upon the future to illuminate it.
Israeli Arts and Culture
Image

It's rare to find a documentary set in the Middle East that isn't mired in politics and discord. Rarer still is one bathed in the kind of optimism and goodwill found in Beth Elise Hawk's new film, Breaking Bread. An inside look at a three-day food festival in Haifa, Israel, pairing Israeli and Muslim Arab chefs, Breaking Bread pursues peace through the power of creating top-notch cuisine.
View More