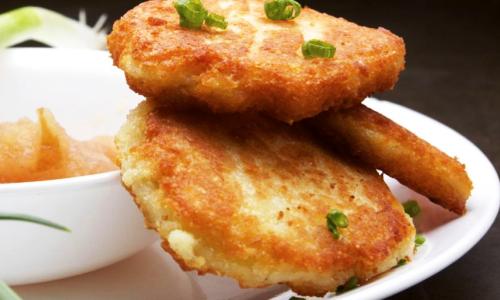 The Case for Applesauce
by Laurence Kaufman

But not by might, and not by power, but by spirit alone shall applesauce prevail.

You may have learned in religious school that we eat latkes at Chanukah to remind us of the miracle of the oil.  But the yeshiva graduates who follow this blog know the real story is the revolt against the Hellenizers - those who were fascinated with the culture of Greece. And what kind of Greece are we talking about? Goose Greece, naturally - known in the vernacular as schmaltz.

Clearly a latke is not a latke unless it has been fried in schmaltz - which of course makes it fleishig, as indeed it should be, because who would eat a latke without a side of brisket?  And if you're cooking with schmaltz, and eating alongside brisket, you would have to wait six hours before going near sour cream.  Obviously you have to accessorize your latkes with applesauce. Ein breirah, there is no other choice.

If you order potato pancakes in restaurants, they're likely to be served with both sour cream and applesauce.  If such a restaurant were in St. Louis or Kansas City, I suppose you could excuse their gaffe as the Missouri Compromise. And of course, if the restaurant were in Pittsburgh, they might say it takes both applesauce and sour cream to elevate and sanctify our lives, and to serve only one is apt rather to obstruct than to further our modern spiritual elevation. But anywhere else, trying to have it both ways is just plain wishy-washy.

Living, as do I, and as does my worthy opponent, in the Chicago area, we have to apply more universal principles, notably pikuach nefesh, the saving of life, and its corollary, as urged at the Union for Reform Judaism's Toronto Biennial by Rabbi Eric Yoffie, healthful eating.  Applesauce is untainted by cholesterol, while sour cream is loaded with it - and, sheh'ne'emar, as it is said, an applesauce a day keeps the doctor away.

In case any apikoros (heretic) doesn't consider the teaching of Rabbi Yoffie definitive, I cite a proof text with which no one can quarrel, Mrs. Simon Kander's Settlement Cook Book. This sacred tome, which once guided every American Jewish balebuste (consummate housewife) rules as follows: (Tractate VII, Griddle Cakes, Waffles, and Pancakes, p.84-85):  Drop (the potato mixture) by spoonfuls on a hot, well-greased (sic) spider, in small cakes.  Turn and brown on both sides.  Serve with applesauce.

Now this makhloket l'shem shamayim, argument for the sake of heaven, is taking place on a Reform Jewish blog, where the spirit of pluralism marches hand in hand with the spirit of personal autonomy. So I concede Rabbi Sommer the right to her opinion that sour cream is a legitimate accompaniment to latkes (even though right-thinking people know its proper place is in beet borscht or on herring). Next thing, she'll be trying to make us believe that hamantaschen can be filled with apricot jam instead of poppyseed.

The Case for Sour Cream
by Rabbi Phyllis Sommer

There is an eternal debate on Hanukkah. I'm sure you're thinking, "candle lighting from left to right or right to left?" or "do we add a candle each night or take one away instead?" but you would be wrong.

The big debate onHanukkah , perhaps the most important decision one can make in the month of Kislev, is this: Applesauce or Sour Cream?

And I'm here today to tell you why sour cream is the ultimate in latke topping.

Let me tell you a little story about how dairy foods came to be a part of the Hanukkah celebration. There once was a Jewish lass named Judith. During an Assyrian siege of her village (as part of the war that is remembered through the Hanukkah celebration), she charmed her way into the enemy camp with a basket of cheese and wine. The enemy general, Holofernes, ate of the cheese and drank of the wine until he was unable to stay awake. The sweet lass Judith then took his sword and beheaded the muddled man. She brought his head back to her people in a basket and saved her town.

Now, aside from the ritual value of the sour cream and the story that it allows us to tell at our dinner tables, there is also the added benefit of calcium (about 2 percent of your recommended daily allowance) and protein (about 1 gram per 2 tablespoon serving). These nutrients enable the latke consumer to create a whole meal around the latkes with no need for any additional protein source at the meal. Why is this beneficial? So the latkes can be the centerpiece of the table, a perfect solution for vegetarians and lighter eaters. No need to add meat to a latke supper, just serve sour cream with your latkes for the perfect combination of vegetable (potato) and protein (sour cream)!

Sour cream never goes out of season (unlike apples) and as long as properly refrigerated, will not spoil for the whole week of Hanukkah. It is the perfect cool and creamy match to the salty, oily, crispy taste of a latke. It's a match made in heaven.

Laurence (Larry) Kaufman is a member of Beth Emet, the Free Synagogue, in Evanston IL, and a long-time Reform Movement activist. Rabbi Phyllis Sommer is the associate rabbi at Am Shalom in Glencoe, IL and mama to four sweet munchkins.