Hanukkah: From Battleground to Festival of Lights 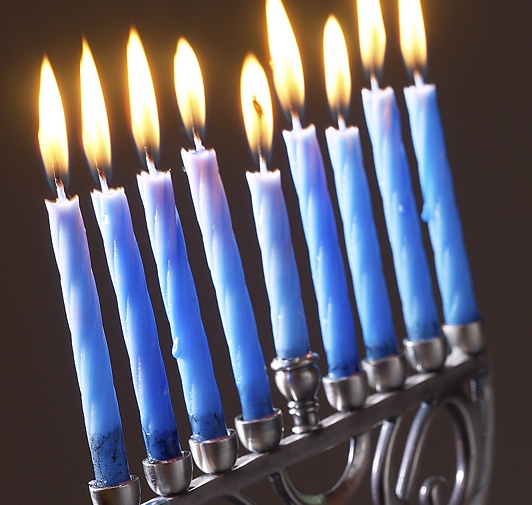 The Hebrew word Hanukkah means “dedication” and refers to the joyous eight-day celebration through which Jews commemorate the victory of the Maccabees over the armies of Syria in 165 B.C.E. and the subsequent liberation and “rededication” of the Temple in Jerusalem.

Technically, Hanukkah is considered a “minor” Jewish festival. Yet today it ranks along with Pesach and Purim as one of the most beloved Jewish family holidays. Clearly, the stirring story associated with Hanukkah, the rituals that emerged from it, and the special Hanukkah games and foods combined to capture the imagination and elevate its status within the Jewish community.

Unlike most Jewish holidays, Hanukkah is not mentioned in the Torah, Prophets, or Writings. The historical events upon which the celebration is based are recorded in I and II Maccabees, two books contained within a later collection of writings known as the Apocrypha.

In the year 168 B.C.E., the Syrian tyrant Antiochus Epiphanes sent his soldiers to Jerusalem. The Syrians desecrated the Temple, and Antiochus abolished Judaism. The only options he offered Jews were conversion or death. Altars and idols were set up throughout Judea for the purpose of worshiping Greek gods. Antiochus outlawed the observance of Shabbat, the Festivals, and circumcision.

On the twenty-fifth day of the Hebrew month of Kislev in 168 B.C.E., the Temple was renamed for the Greek god Zeus. Pigs were sacrificed in the Temple. The Torah was splattered with pigs’ blood and then burned. Thousands of Jews chose to die rather than commit idolatry. Among these martyrs was a woman named Hannah who, with her seven sons, defied the Syrian decree.

But slowly a resistance movement developed against the cruelty of Antiochus, led by a priestly family known as the Hasmoneans, or Maccabees. The head of the family was an elderly man named Mattathias. He and his five sons left Jerusalem and took up residence in a small town north of Jerusalem, called Modi’in. When Syrian soldiers appeared in the town and commanded the inhabitants to offer sacrifices to Zeus, Mattathias and his sons refused. Mattathias killed one Jew who began to sacrifice to Zeus, and his sons then turned upon the Syrian troops and slew them.

It was a turning point in the struggle. The Maccabees became instant folk heroes. Fleeing to the hills with their followers, they conducted a campaign of guerrilla warfare against the occupying Syrian forces. Mattathias’s son, Judah, known as “the Hammer,” became the chief strategist and military leader.

Furious, Antiochus decided to destroy the people of Judea. He sent a large army, with instructions to kill every man, woman, and child. Though outnumbered, Judah Maccabee and his fighters miraculously won two major battles, routing the Syrians decisively. By 165 B.C.E., the terror of Antiochus had ended. The Jews had won a victory for their land and their faith.

The idols were torn down, and, on the morning of the twenty-fifth day of Kislev in 165 B.C.E., the Temple in Jerusalem was reconsecrated—three years to the day after its original defilement. In celebration, the people of Jerusalem lit bright lights in front of their homes and decided to mark their deliverance with an annual eight day festival. It was called the Feast of Lights, the Feast of Dedication, or simply Hanukkah.

Originally, the eight-day Feast of Lights was intended to parallel the eight days of Sukkot. The Books of Maccabees made no mention of the beautiful legend concerning the jar of oil that has come to be a part of Hanukkah. Several centuries later (500 C.E.), the story of the cruse of oil emerged in the Talmud.

The legend relates that when the Maccabees entered the Temple and began to cleanse it, they immediately relit the ner tamid, or “eternal light.” A single jar of oil remained, which was sufficient for only one day. The messenger who was sent to secure additional oil took eight days to complete his mission. But, miraculously, the single cruse of oil continued to burn for eight days. The Rabbis of the Talmud, therefore, attributed the eight days of Hanukkah to the miracle of the little jar of oil.

We continue the ancient customs related to Hanukkah today, commemorating the liberation of our people and their affirmation of human dignity and freedom of religion. In Jewish homes throughout the world, the eve of the twenty-fifth of Kislev begins an eight day celebration involving many joyous customs and ceremonies.

Rabbi Daniel B. Syme is Rabbi of Temple Beth El in Bloomfield Hills, Michigan and is a former Senior Vice President of the URJ.

Rabbi Daniel B. Syme is rabbi of Temple Beth El in Bloomfield Hills, MI, and is a former senior vice president of the Union for Reform Judaism.