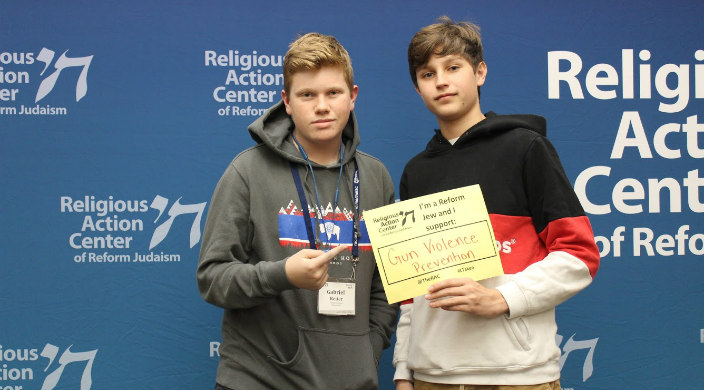 Leviticus 19:16 instructs us, “Do not stand idly by while your neighbor’s blood is shed.” For too long, Congress – and, indeed, all of America – has stood idly by, mass shooting after mass shooting, refusing to take action to prevent the next massacre from happening.

In mid-February, a gunman armed with an assault weapon murdered 17 students and teachers at Marjory Stoneman Douglas High School in Parkland, FL. This tragic event drove teens nationwide, including those of NFTY: The Reform Jewish Youth Movement, to ask: If not now, when? And if not us, who? Now, they’re leading the way in the fight to end gun violence in the U.S.

Join us in taking action to stop these massacres and address the unacceptably high rates of gun violence in the United States. Here are six things you can do to take action:

1. Attend a March for Our Lives event.

Driven by the efforts of Parkland-area teens themselves, March for Our Lives will take place in Washington, D.C., and countries across the U.S. on March 24, 2018. Together, marchers will demand that safety become a priority and that gun violence and mass shootings come to an end.

Elected officials must hear from their constituents that inaction is not an option. Join us in urging Congress to urgently adopt eight policy proposals to improve public safety, prevent gun violence, and save lives. Use this easy action alert to learn more and contact your Members of Congress directly – then send it to friends and family and ask them to do the same.

Motivated by the shooting that took the lives of their peers, teen members of NFTY are the driving force behind the Reform Jewish community’s mobilization for gun violence prevention. Visit www.nfty.org/gvp to learn more and to get involved.

4. Raise your voice on social media.

Tell the world you’re fighting for gun violence prevention – and urge them to join you. NFTY has created a guide titled Social Media Tips for Teen Gun Violence Prevention Activists, but these tips are certainly applicable to adult activists, as well. You’ll also want to check out the New York Times’ piece “For Activists, Tips on Safe Use of Social Media.” It’s from 2011, but the sentiments are still relevant today.

If you don’t already subscribe to the Weekly Update, our Friday email newsletters, be sure to get on the list. In doing so, you’ll receive weekly news from the Reform Jewish community, including any updates on this campaign and other social justice efforts.

6. Lend your financial support to this important work.

The Reform Jewish community is deeply committed to gun violence prevention, but we can’t do it without you. Your generous donation will help NFTY continue this work to make the world a better and safer place, for ourselves and for generations to come.