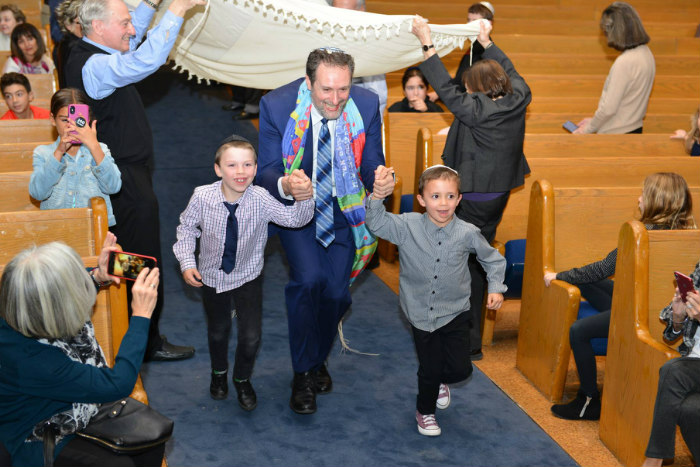 Rabbi Michael Dolgin, our Genesis commentator for Ten Minutes of Torah, is the senior rabbi of Temple Sinai Congregation of Toronto, Ontario, is passionate about community engagement, interfaith and intercultural understanding, and tikkun olamtikkun olamתִּקּוּן עוֹלָם"Repair of the world;" Jewish concept that it is our responsibility to partner with God to improve the world. A mystical concept of restoration of God's holiest Name to itself and the repair of a shattered world. Often refers to social action and social justice. . (Haven’t been keeping up with his commentaries? You'll find them all here.)

We caught up with Rabbi Dolgin to learn about his early Jewish influences and how his Torah commentaries speak to some of the critical issues of our time.

ReformJudaism.org: Tell us about your most influential Jewish experiences growing up.

Rabbi Michael Dolgin: I grew up in Chicago, where we belonged to North Shore Congregation Israel and I was active in a youth group at Conservative Beth Shalom. For a couple of summers, I attended a teen program called International Torah Corps (ITC) in Littleton, N.H., where I did intensive learning with some very brilliant Reform rabbis, including Rabbi Marc Saperstein [a former Ten Minutes of Torah commentator] and Rabbi Chaim Stern.

I read Tanach texts in Hebrew for the first time, encountered serious Jewish and rabbinic ideas, and learned that Judaism was a deep and powerful tradition that belonged to me. Through the ITC experience, I realized that there was much more to Judaism than what I had learned in Sunday school. My desire to introduce this tradition to others inspired me to become a rabbi.

What did you study in college?

My undergraduate studies at the Miami University in Ohio focused on organizational communication, and my graduate work concentrated on speech and rhetoric. Knowing that I wanted to be a congregational rabbi and would be spending five years studying the Jewish religion at the Hebrew Union College-Jewish Institute of Religion, I wanted to focus on subjects that would broaden my interests and capabilities.

In your commentary on Parashat Noach, you write that after Noah and his family emerged from the ark after the flood, God chose a rainbow sign as the first covenant between humanity and God. God said to Noah: “Never again, will I doom the earth because of man, since the devising of man's mind are evil from his youth. Nor will I ever again destroy every living thing as I have done.” How do you interpret this Divine declaration?

God created human beings with free will, knowing that many of us would be tempted to make bad or even evil choices. By relying on family, community, and tradition, we also have the ability to make positive and meaningful choices.

In the story, God essentially says to Noah: I am pushing the restart button on creation because of you, but I'm not going to do it again. I gave human beings free will so that they can take responsibility for their own actions. Think of the rainbow sign as a parent saying to a child, “I will clean up your mess, but only once. It is now your responsibility.”

We human beings have made a mess of the earth. God doesn't have to destroy the world again. We are doing it ourselves.

I think that the Torah’s message is painfully on point. The image of Noah's Ark reminds us we're all in one boat together, and the fate of the earth is now solely in human hands.

In your commentary on Parashat Vayeira, you talk about how Abraham intervenes with God to try to save the people of Sodom and Gomorrah from God's wrath. What can we learn from Abraham's actions, especially at this moment of deep political division?

Abraham has the courage to speak truth to the ultimate power in his plea not to destroy the innocent along with the guilty. But he addresses God with humility, saying, “But I’m only a person.”

In combining courage and humility, respect for truth and justice, and compassion for the other, Abraham models what I think is the attitude we need to get us past this of time of political strife peacefully.

Do Canadian Jews share the concern of American Jews about rising antisemitism and threats to democracy?

Antisemitism is a Canadian issue as well as an American issue. Jews are targeted more than any other minority in Canada. In the last couple of years, members of our congregation have received antisemitic threats. On the question of threats to democracy, though, the political stability we experience here in Canada doesn't seem to be mirrored the frightening events that are going on in the States.

What do you regard as the essential attributes of an effective Jewish leader?

I think effective Jewish leaders are exemplars who are clear about their own Jewish perspectives and commitments and true to their principles and values. They need to model love of learning with a growing mind and an open heart. They need to show respect for others, especially those with whom they disagree. They need to be willing to engage with the larger community, to challenge and to be challenged as they pursue truth and justice with courage and humility.

Want to receive our weekly Torah commentaries via email? Subscribe to Reform Voices of Torah, sent every Monday as part of our Ten Minutes of Torah series.

END_OF_DOCUMENT_TOKEN_TO_BE_REPLACED

In the beginning God created the heavens and the earth. The earth was unformed and void, and darkness was upon the face of the deep; and the spirit of God hovered over the face of the waters. God said: “Let there be light.” And there was light.
Jewish Values
Image