Judaism, Homosexuality, and the Supreme Court 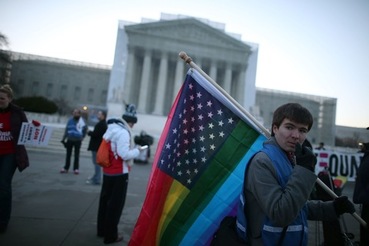 Any moment now, the United States Supreme Court is going to decide on two cases that involve same-sex marriage. Advocates on both sides of this issue are anxiously awaiting either a moment of celebration or of despair. Of course, it is possible that they will get neither. The court could rule differently in the two cases, or it could decide both with halfway measures that make neither side completely happy. Stay tuned.

I have written before about the so-called "Biblical Definition of Marriage" and, more specifically, about the biblical verses that people think define marriage. In anticipation of the Supreme Court's rulings, I also want to say a few words about Jewish views of homosexuality.

(You may be wondering about the story of Lot in Sodom in Genesis 19 as another example of homosexuality in the Bible. The "Sin of the Sodomites" is not regarded as homosexuality in Jewish tradition, as I discussed in another post. And, no, there is no mention at all about sexuality between two women in the Hebrew Bible.)

We might be tempted to say that the two verses in Leviticus are enough to end the debate, at least regarding male homosexuality. We have a commandment that calls sex between two men an "abhorrence," and we have a punishment for those men who do have sex with each other that includes the death penalty. What more is needed?

A careful look at these two verses, however, shows that this is not an open-and-shut case. To start with, both verses use rather tortured syntax to refer to the abhorrent act. "Lying down with a woman" seems to be a phrase that Leviticus is using to specify sexual intercourse, not simply lying down next to another guy. The text needs that explanation for a simple reason — there is no word in Biblical Hebrew that means homosexual. The idea can only be conveyed by comparing it to a man having sex with a woman.

That should not be surprising since English did not have the word "homosexual" until the late nineteenth century, at the earliest. The idea embodied in the word - that some people have a sexual attraction directed toward people of the same gender - is very much accepted today as a scientific fact. However, that idea did not exist until recent times. There wasn't even a word for it.

So, how was sexuality between two men understood before that modern understanding? How was it understood in the time of the Hebrew Bible? Throughout the Bible, sexuality between people of the same gender, especially between two men, is understood in one of two ways: 1) A form of violence and domination exerted by one man over another to humiliate him, and 2) A form of sexual excess that is so unbridled that it does not discriminate between male and female.

Interestingly, these are both forms of sexuality that, even today, are not practiced primarily by people whom we would call "homosexual." Modern examples of the first category are rapes committed in prisons, on battlefields, and by bullies in schools. (Here is a contemporary example from my own state of Florida, but it's not for the squeamish.) Such crimes are committed by men who seem to be more interested in subjugating and humiliating their victims than in sexual gratification.

Clearly, this is not a reference to men who have an inborn sexual attraction for other men - people we would describe as homosexuals. Rather, this passage from the Christian Bible refers to heterosexual men who depart from their natural orientation in order to feed a gluttonous sexual appetite. (Why do I mention this Christian text? For the same reason a historian would. It is close in time to the final composition of the Hebrew Bible, and it was written by people who were familiar with the way the Jews of that time interpreted the Bible.)

In all these biblical references to same-gender sexuality, there is nothing like the typical homosexual and lesbian relationships of today - committed, stable, monogamous and family-oriented. There is nothing in the Bible that describes or condemns such relationships. The only thing condemned, in fact, is violent sexual subjugation of men by other men, and orgiastic behavior among women and men in which all seek sexual gratification indiscriminately - behaviors that, today, would not necessarily be labeled as homosexual.

In looking at the two verses from Leviticus, we should also note that the Hebrew word for "abhorrence" (sometimes translated "abomination") does not carry quite the same punch as it does in English. The Hebrew is to'eivah, and the meaning of the word changes in different contexts. In the Joseph story, to'eivah is the word that describes the way that Egyptians feel about eating at a table with Israelites (Genesis 43:32). Apparently, they thought our ancestors had bad table manners. The word is not always used in the Bible to convey moral outrage.

To'eivah is also the word the Hebrew Bible uses to condemn a woman wearing men's clothing (Deuteronomy 22:5), a man remarrying a woman he had divorced previously (Deuteronomy 24:4), and predicting the future from signs and omens (Deuteronomy 18:9-12). Clearly, Jewish tradition does not consider these to be transgressions of a degree that we would associate with the English words "abhorrence" or "abomination."

What is more, the very passage in Leviticus that calls sex between two men an abhorrence, also declares that a man may not marry his wife’s sister (Leviticus 18:18). Yet, within the Hebrew Bible itself, Jacob married first Leah and then her sister, Rachel, without a hint of condemnation. The Bible, at times, question its own laws.

The Talmud and other rabbinic literature contain but a few passages about homosexuality. Interestingly, there is not a single case mentioned in which the death penalty was enforced. It is uncertain to what degree the rabbis may have wished to overlook this law, as, for example, they chose to overlook the law demanding the death penalty for insubordinate children.

The rabbis of the Talmud accepted the general idea of a ban on homosexuality between men, but they also denied that such behavior even existed among Jews. They did extend the ban to include sexuality between two women, but they did so by defining it as a form of lewd behavior (like dressing immodestly) and categorized it as a "foreign practices," that is, imitative of the sexual practices of other nations. Jews, the rabbis assumed, don't do that sort of thing.

But rabbinic tradition also contains passages that counter the condemnation of homosexuality. The Talmud states that it is forbidden to humiliate another person and that one may even violate a negative commandment ("Thou shalt not...") in order to avoid humiliation (B. Berachot 19b). The Talmud also states that a person who is compelled to transgress a law by forces beyond his or her control has not truly sinned.

In an age when science has given us the understanding that sexual orientations is not a choice — it is an aspect of our nature with which we are born — our thinking about Jewish law and homosexuality must change. We need to re-evaluate our understanding of Torah if it leads us to condemn people when they seek to fulfill — with love and compassion — the sexual desires God has given them. We must recognize that it is the height of humiliation to tell people that they are unworthy of love and intimacy because of the way that God has made them.

Can Judaism do that? Can we change the way we read the Torah because of changes in human understanding? In fact, Judaism demands that we do so. No less an authority on the Torah than Maimonides stated that God gave us minds so that we would use them. It is our obligation, he wrote, to use our abilities to discover scientific truths about the natural world and to apply what we learn to our understanding of Torah. Given our uncertainty in understanding what the Bible means in the few places it discusses homosexuality, we have an obligation to consider all the evidence we have in interpreting its words.

When the Supreme Court makes its ruling in the next few days about same-sex marriage, it is certain to set off a new round of debate about homosexuality, the Bible and religion. Be ready for it. Also be ready to defend the ideas that there is more than one "religious" way of looking at these questions. From the perspective a Judaism that is willing to change with a changing understanding of God's creation, the religious reading may be the one that leans on the side of compassion and love.

Rabbi Jeff Goldwasser is the rabbi of Temple Beit HaYam in Stuart, FL.

Rabbi Jeff Goldwasser is the rabbi of Temple Sinai in Cranston, RI; he previously served Temple Beit HaYam in Stuart, FL. He blogs at Reb Jeff.

END_OF_DOCUMENT_TOKEN_TO_BE_REPLACED

As I thought about what would be involved if we did our own Tu BiShvat seder, it seemed interesting and fun. Tasting lots of fruits? Marking a time to appreciate, mindfully and respectfully, trees and the earth? Drinking wines and grape juices? Yes, please.
Social Justice
Image