Vashti: Finding a Feisty Feminist in our Purim Story 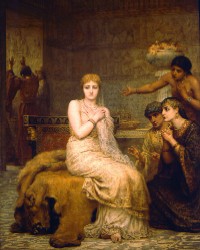 A few years ago, I found myself in a bit of a Purim predicament specifically pertaining to the “to tell or not to tell” dilemma regarding Vashti, one of the oft forgotten players in our Purim tale. My task on the surface seemed perfectly easy; not the moral wrestling reserved for Talmudic scholars. Go around to each of the preschool classrooms at our synagogue and explain the Purim story. To further complicate the situation – I was quite pregnant at the time, so dressing up like the lovely Queen Esther and prancing around like a virginal beauty queen would surely have come off like a bad Purim Shpiel.

Though Purim is a holiday of puns and opposites the tale we tend to present to our young and impressionable yeladim (children) is often the G-rated version, as are the family-friendly activities that accompany this holiday. The real text, however, is quite R-rated. Maybe Lena Dunham, the creator of “Girls”, would like to buy the rights to produce it for HBO with a bunch of Brooklyn hipsters divvying up the roles. The real version of this sacred story contains nudity, jealousy, and an embarrassing marital scandal. And that’s just in the first chapter!

The challenge for me is how to teach about Vashti and what a brave and powerful woman she was. She did not wield power in a political sense, but rather, in the realm of controlling her own self and making decisions that were good for her and her body. She was a feminist many millennia before the term was coined, who firmly put her foot down, unwilling to compromise her sense of self.

In case you need a refresher – Vashti’s husband is King Ahasuerus. He invites her to his week-long gluttonous feast to “display her beauty” before him and his royal (and royally inebriated) friends. But Queen Vashti declined the invite and “the king was greatly incensed.” He asks his noble pals for advice and the group vote is banishment for the men believe “the queen’s behavior will make all wives despise their husbands.” When the party is over, the King yearns for Vashti. But once again, his advisors swoop in with the idea of bringing beautiful young virgins to his harem, so he could “try them out” (wink wink) and pick a new replacement Queen. In enters a stunning Jewess named Esther who seemingly has some brains in addition to her beauty, because she is able to save the entire Jewish People from the murderous plot of the evil Haman. So as the story unfolds we quickly forget about Vashti and the stand she took. Vashti is relegated to a footnote, instead of being considered a woman of valor for standing up for own rights.

What – you ask - did I do with my preschoolers waiting with bated breath for the real megillah? I wimped out! Me and my pregnant belly donned a hot pink feather boa, a rhinestone-encrusted crown, and a sparkly sepulture and told the Disney-version of our biblical tale. I regret that Vashti and her brave tale didn’t get a fair shake that day, but I accept the developmentally-appropriate restraints when hanging with 5-year olds.

However, with the right audience, it is imperative to give voice to Vashti’s plight. Sometimes one has to wait to teach, or receive, the more “grown up” version of our sacred texts. As adults we owe it to ourselves, as well as to the text, to read the Tanach (the Hebrew Bible) with our eyes wide open. Bible stories are for children, but “Torah study” is for adults. We spend a significant part of this holiday blotting out the name of the evil Haman. If we are not careful and mature in our approach, we might not hear the hushed voice of a strong woman whose brave actions had a lot to say.