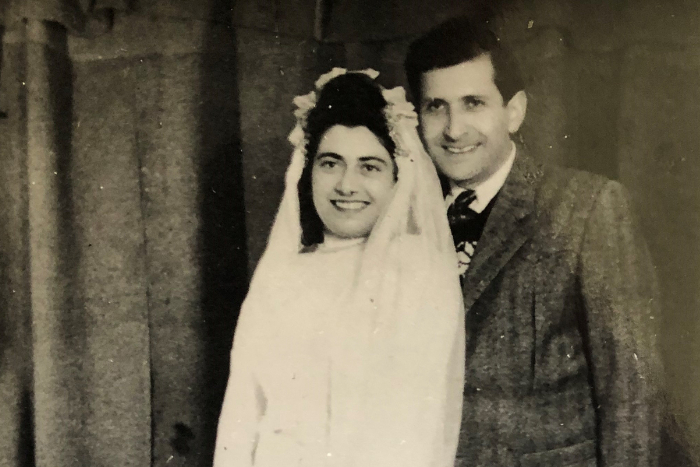 The authors parents, Adela and Wolf, on their wedding day after being reunited following the Shoah

My mother, Adela, is 100 years old. Every year she celebrates two birthdays: the day of her natural birth and the day of her liberation from a notorious Nazi death march 76 years ago.

She considers her second birthday as the more significant one because it was miraculous. After five months of marching in the frigid winter of 1945, my mother was deemed unfit to continue and herded with 29 other women onto the back of a flatbed truck to be shot in a nearby Czech forest.

Along the way, an American fighter plane suddenly appeared overhead and strafed the truck’s exposed human cargo. A woman guard sitting next to my mother was hit, and, in the confusion, Adela escaped into the forest, to freedom.

My mother felt very alone on the day of her rebirth – May 5. She knew her parents had been murdered in Auschwitz, and she held out little hope that her fiancé was still alive. She had last seen Wolf Manheimer five years earlier at their engagement party in Bedzin, Poland.

Then, against all odds, another miracle happened: Adela and Wolf were reunited and married in Feldafing, a displaced person’s camp in U.S. zone of occupied Germany. I was born a year later, and we eventually immigrated to the United States.

We lived in a close-knit community of Yiddish-speaking survivors who felt that Americans, including Jews, could never fully understand what they had endured. They wanted no pity and resented those who asked them, almost accusingly, how they had managed to survive – so they kept to themselves. It was less painful that way.

Unlike many survivors who did not tell their children about their painful past, my parents were open about it. Even if he wanted to, my father, of blessed memory, could not have hidden from me and my sister, Rose, the scars of his victimization: the Auschwitz number tattooed on his forearm; the entry wound on his chest where a Nazi guard shot him after he jumped from a moving train; the permanent blue mark on his knuckle where a Mauthausen kapo repeatedly hit him; the large cavity in his upper back from TB surgery.

I asked my mother recently if she had ever considered not telling us about the Holocaust. This is what she said:

“Never. I am living the truth. It would be a lie if didn’t tell you and Rose what happened to us. You would not have known how I suffered through that terrible death march. Knowing the truth made you better appreciate what is important in life, made you stronger, better able to overcome hardship.”

Adela lives by her mother’s final words to her: “If someone does something bad to you, don’t do it back. Two bad ones don’t make a good.”

My mother’s answer to hate is love. Every letter she mails is decorated with little red heart stickers. When I asked her on Mother’s Day what she wished for herself and for the world, she said, “For myself good health, so I can be good to others. For the world, peace not war. No bad person wins in the end. What did Hitler achieve?”

In her own way, my mother is speaking the language of the “saved remnant,” or she’eret hapletah, the term survivors adopted after liberation. Having suffered the ultimate evil and cruelty, most of them rejected hatred and revenge. Instead, they rallied around the banners of Humanism and Zionism: Humanism to guard against future genocides; Zionism to guard against the perils of Jewish statelessness.

As witnesses to history’s greatest crime, some survivors hoped that people everywhere would respect their testimony and put an end to racism, antisemitism, and war. In my birthplace, Feldafing, survivors published a newspaper. One editorial read:

“What we, the saved remnant, must do is show [the world] that we victims of Nazism will always be the carriers of humanity.”

Others were more doubtful. Only weeks after his liberation, one despairing survivor wrote:

“Mankind does not comprehend what we have just gone through, and neither shall we be understood in the future.”

After a few years, the DP camps were closed and the survivors dispersed, ushering in a 30-year era of silence. It seemed that only psychiatrists were interested in survivors, probing their minds for signs of “survivor guilt” and other mental disfunctions. Mainstream publishers rejected survivors’ memoirs.

In most Jewish religious schools, the Holocaust was a forbidden subject because parents did not want their children to get upset. I can’t tell you how many times over the years I was told, “Enough already with the 6 million. It’s time to put it behind us.”

For the saved remnant, the era of silence ended in 1981, when they convened an international conference in Jerusalem. Their spokesman, Elie Wiesel, of blessed memory, delivered these words at the Western Wall:

“Here in this city of eternity we must ask ourselves the painful question: Have we survivors done our duty? It is with fear and trembling that we often reach the conclusion – something went wrong with our testimony. It was not received. Otherwise, things would have been different.

“When we were liberated, we thought, if only we could tell the tale, the world would change. Well, we have told the tale and the world has remained the same.

I will never know in my own body the horrors of being an Auschwitz inmate or being marched at gunpoint month after month, starving and scared. But as a son of survivors, I feel that it is my sacred duty to keep alive the prophetic aspirations of the saved remnant.

Every night before going to bed, my mother says this prayer:

Learn more about Yom HaShoah, including how to observe it and what else survivors and their families have to say.