Shavuot, which has become known as the Festival of the Giving of the Torah, was originally a harvest holiday. Along with Sukkot and Passover, it is one of the Shalosh Regalim (Three Pilgrimage Festivals), during which people gathered at the Temple in Jerusalem with their agricultural offerings.

In the time of the Temple in Jerusalem, the ancient Israelites brought their first fruits (first harvest of their crop) to the Temple to offer to God at Shavuot, 49 days after Passover. (The name Shavuot, literally "weeks," symbolizes the completion of this seven-week period.) In Leviticus 23:21, the Torah commands: "And you shall proclaim that day to be a holy convocation!”

After the Temple was destroyed and the Israelites could no longer bring the first fruits of their harvest as offerings, Talmudic rabbis reframed the holiday. The Rabbis ascribed Shavuot to the biblical story which recounts how, after the Exodus from Egypt, the Israelites proceeded to Mount Sinai in the desert. Moses ascended the mountain to meet God, who gave him the Ten Commandments, which were written on two tablets to be delivered to the Israelites.

Based on the Torah’s description of when the Israelites arrived at Mount Sinai after the Exodus from Egypt (Exodus 19:1), the Rabbis set the date of the giving of the Torah as 6th day of the Hebrew month of Sivan, and the holiday that was once purely agricultural became the commemoration of the Israelites receiving the Torah at Mount Sinai. Today, even as we remember its agricultural roots, the holiday allows us to celebrate the Torah, education, and the wisdom that Jewish teachings have to offer us.

Shavuot is known by several names: Chag HaShavuot (the Festival of Weeks), Chag HaBikkurim (the Festival of the First Fruits), Z’man Matan Torateinu (the Time of the Giving of Our Torah), and Chag HaKatzir (the Festival of Reaping). Some Ashkenazi Jews may pronounce and write the name of the holiday as “Shavuos.” 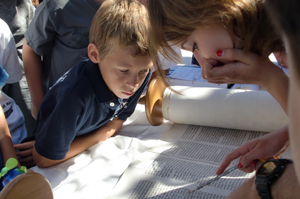