Searching Oneself on the Way Forward

After World War II, the birthrate for Shoah survivors of childbearing age living in displaced persons camps was one of the highest ever recorded anywhere. Although these parents had witnessed Nazi atrocities, they were so imbued with optimism and an unshakable faith in the future that they began families in record numbers even before they knew how or where they would live.

My grandparents emigrated to America for the same reasons that as many as three million Eastern-European, Yiddish-speaking Ashkenazi Jews came to these shores between 1880 and 1914.They journeyed here to start a new life, escape poverty and persecution, satisfy political idealism, and be reunited with family who had previously emigrated here one by one. My maternal grandfather, for example, left his village in Hungary when he was 14 years old and came came to the United States not knowing what to expect. He sold fruit to workers building the New York City subway system, and sent money home to bring his mother and siblings to New York where they prospered, raised families, and lived successful lives. He, like so many others, had heard the rumor that America was die goldene medina — the golden land. However, as one immigrant discovered, this Promised Land was not as full of promise as he had hoped. He said:

Records of immigrants starting life anew go back as far as the days of our biblical matriarchs and patriarchs, beginning with Abraham who took an enduring journey, a course that 20th century biblical commentator E. A. Speiser1 termed "The most fateful commencement in history." In Parashat Lech L'cha, Abraham began this journey when God commanded Lech l’cha, "Go forth from your land, your birthplace, your father’s house to the land that I will show you. I will make of you a great nation ..." (Genesis 12:1-2). This journey was no routine expedition; it was a quest that began an epic search for spiritual truths, the Bible’s central theme.

A modern reader may wonder if Abraham truly understood the importance of his "fateful commencement." Consider the two verses at the end of Noach, the parashah immediately preceding this week's portion, Lech L’cha: "Terah took his son Abram ... and they all left Ur of the Chaldeans for the land of Canaan, but they got as far as Haran and settled there" (Genesis 11:31). The verse suggests that Abraham may have intended to complete his father's unfinished migration to Canaan. In so doing, Abraham embarked on two journeys: one physical, to settle the land of Canaan; and the other, spiritual, to make a great nation, thus becoming the progenitor of the People Israel.

Millennia after Abraham's journey to Canaan, the Rabbis expressed the tension between physical and spiritual journeys that constitute the real world in which we live and the idealized world to which we aspire, based on the allusion in Psalm 122:3: “Jerusalem built up, a city knit together.” They took the verse to mean that two Jerusalems are bound together: Y’rushalayim shel matah — a lower earthly space, and Y’rushalayim shel ma-alah — a lofty spiritual place. Rabbi Yochanan expressed the strain that this duality imposes: "I will not enter the Upper City of Jerusalem until I can enter the Lower City of Jerusalem" (Babylonian Talmud, Taanit 5a). A fictional account acknowledges the conundrum raised by Rabbi Yochanan:

"A man dreamed that he died and entered heaven where the greatest Sages of the Jewish past sat at a simple table, absorbed in sacred study in a shtetl-like academy. He was taken aback by a heaven that was very much like earth.

'Is this all there is?' the man asked. 'I thought this was supposed to be Paradise.'

A voice responded, 'You are correct, the Sages are not in Paradise; Paradise is in the Sages.' "

The phrase lech l’cha, translated as “get to yourself,” can be seen as redundant. We might think of “yourself” here as both the direct and the indirect object, so that the phrase means, “get yourself to yourself.” Philologists term this construction the "ethical dative," whereby an individual has a vested interest in the action, in this case, Abraham going into himself. While, for philologists, this is merely a technical explanation of the phrase, this interpretation is too appealing to ignore. Abraham's going forth to Canaan, his going away from his homeland coincides with his going into himself, instructing a Bible reader to understand that a journey should lead inward and outward, to the known and the unknown, heavenward and earthbound.

The phrase lech l’cha set in motion a "fateful commencement," not only because it launched ethical monotheism and the undying devotion of a people to a God and a Land, but also because it provided a foundation for those in personal search of the spiritual Y’rushalayim shel ma-alah. Whereas most individuals travel to planned destinations, more often than not, they do not understand where that pilgrimage may lead them, especially when called upon — lech l’cha — to go on a journey for God.

The Reward of a Journey

Looking at Parashat Lech L’cha, Rabbi Pearce analyzes Abraham’s departure and his difficult journeys: one a physical challenge, and the other a spiritual challenge. These journeys end with instant gratification: Abraham is given a new name by God for the spiritual journey and land for the physical journey. This inspires us to put our faith in God and be willing to leave everything we know for the greater good. The problem is that Abraham is rewarded at the end. With this example, are we learning that we should expect a tangible gift at the end of our efforts and journeys?

Many adults teach children through positive reinforcement (instant gratification). Fundamentally, this is good because it productively promotes good behavior. But we must also teach children that rewards are not always instant and that sometimes the journey itself is the reward. Treating life's journeys like a race, expecting prizes at completion, leads to losing the true race, because the importance of savoring each moment is forgotten.

NFTY teaches teens to “take time to smell the roses” through guided meditation services, introspective social action programming, and engaging within the community. We push them to make the most out of their final months in high school. In emerging adulthood, we have the luxury of being unaccountable; we don't have huge commitments, spouses, children, or a mortgage. That is our future. It's easy to acquire tunnel vision for that future and forget to appreciate our current state.

Liminality is a state of movement or transition that exists for a limited time. To be in a liminal state is to be in transition. At NFTY, we embrace liminality. Physical liminality is crucial when transitioning from high school forward. Spiritual liminality allows appreciation of immediate moments and experiences as we prepare to experience our future.

It’s important to teach teens that although a reward at the end of a journey has purpose, it’s not be the only reason for the journey. By understanding that the journey itself adds value, teens gain skills that help them make the most of each moment, as they attain adulthood. Understanding the value of any endeavor is one of the beginning steps to knowing more about yourself. By taking time to reflect on these journeys and preserve the memories, you are creating a tangible reward for yourself, while still being totally immersed in the present.

When do we read Lech L'cha

Rabbi Stephen S. Pearce, Ph.D. is senior rabbi emeritus of Congregation Emanu-El of San Francisco, and a faculty member of the Fromm Institute for Lifelong Learning at the University of San Francisco, and the Beyond The Walls: Spiritual Writing Program at Kenyon College. He is the author of Flash of Insight: Metaphor and Narrative in Therapy and other articles, poems, and books.

END_OF_DOCUMENT_TOKEN_TO_BE_REPLACED 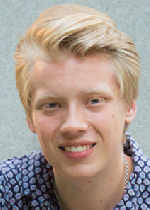 Zachary Herrmann from Congregation Kol Ami in Vancouver, Washington, is the 2017-18 president of NFTY: The Reform Jewish Youth Movement. Zach was previously president of NFTY's Northwest Region (NW) and is an active member of his local Jewish community. He has a passion for change, working as both a leader and team player. He gives much of the credit for his determination and drive to his years at the URJ Camp Kalsman, URJ Kutz Camp, and NFTY-NW. Zach is committed to everything he does, always striving to perform to the best of his abilities, and is ready to proudly represent the voice of Reform Jewish teens across America.

END_OF_DOCUMENT_TOKEN_TO_BE_REPLACED

Listening to Our Calling
Torah as Our Guide and Companion
Traveling Down the Road That Helps You To Find Yourself
The Challenge of Letting Go of Children
Lech L’Cha for Teens: Shabbat Sha-raps