The Melodies of the Four Questions: Mah Nishtanah Tunes for Passover

Why Is This Melody Different from Other Melodies?
Cantor Alane Simons Katzew
Image 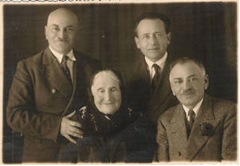 Do you remember the first time you were called upon to recite the four questions? There is nothing quite like the sound of the youngest child making a first attempt at the four questions. Proud parents at the ready silently mouthing the words lest the youngster should stumble and require reinforcements, so begins the transmission of the tradition, V'higad'ta L'vincha, and you shall tell this historical tale from one generation to the next.

While many may often think of the melody to the Four Questions that we sing during the holiday of Passover as dating back to Sinai itself, it may come as a surprise to learn that at least one of the melodies many of us sing for the Mah Nishtanah has its origins in relatively modern times.

Mah Nishtanah Halailah Hazeh Mikol Halailot? Why is this night different from all other nights? In the Eastern European Cheder (classroom) the Melamed (teacher) would call out to his students in a 'study mode,' a sing song chant of only a few pitches, alternating between asking the question with the interval of an ascending perfect fourth and answering with a descending perfect fifth. For those who have no music training, consider the way in which we punctuate our speech. The tone of our voices remains higher to communicate that we are asking a question, yet when we complete a thought and to indicate to another person that we have concluded our speech pattern, our tone descends. Teachers have long known that music is a very powerful method for teaching students to memorize or internalize a text. Thus the prevailing use of thislern-steiger or 'study mode' as a devise for memorizing Talmudic text. In the original, the text for the Four Questions is derived from Seder Moed, Mishnah Pesachim 10:4. Once learned by students in the classroom, this same melody soon found its way into the home and became an integral part of the Seder ritual.

Hebrew was not the typical language spoken at home in Eastern Europe. Yiddish prevailed as the lingua franca (mother tongue) while Hebrew was reserved for use in study and prayer. We learn from an article by Cantor Samuel Weiss that "a related "study mode" marked by the falling motive from the minor third to reciting tones on the tonic followed by a leap to the 5th (eb, c, g) (cf. Yiddish question-and-answer songs like "Vos Vet Zayn Az Meshiakh Vet Kumen") was also sometimes used for the Four Questions, but was more typically used for the "Answer", i.e. the rest of the Haggadah. It is this melody which is identified as the basis of the Israeli rhythmic version of the Four Questions taught in most of our Hebrew schools today.

But the story doesn't end here. Most notated versions of this melody with the repeated,Halailah Hazeh, Halailah Hazeh punctuating the end of each question, mark the composition as "Israeli" or "Traditional". When a melody is so quickly learned and passed down by oral tradition, the composer often becomes known as the mythic 'anonymous.' Interestingly, even 20th century scholar and author of the seminal Jewish Music text "Heritage of Music," Dr. Judith Kaplan Eisenstein, in her 1987 course entitled "The Music of the Jewish People" presented on the radio program Jewish People's University of the Air, references this melody only as Israeli. However, according to Dr. Eliyahu Schleifer, noted musicologist and director of the Jerusalem based first- year cantorial program at Hebrew Union College, the melody was written by Ephraim Abileah in 1936.

Ephraim Abileah was born in Russia in 1881. Prior to relocating to Palestine, he was known as Leo Nesviski (Niswizski) and was known to have been among the founders of The Society for Jewish Folk Music in St Petersburg, Russia. In fact, Nesviski-Abileah was among three representatives to present and win the case for legalization of the Society in November of 1908 (Albert Weisser, The Modern Renaissance of Jewish Music). According to a 1982 interview with his brother at age 96, Arie Abileah, aired on Israeli Radio, the brothers, filled with ardent Zionist fervor, left Russia and came to Israel by way of Egypt in 1922. Their father was a cantor and thus the intimate knowledge of the aforementioned 'study modes' would have been inherent in their upbringing, emerging in their compositions subliminally and consciously.

Of the myriad compositions undertaken by composers, many never become known to the public. For example, George Frederick Händel wrote many oratorios, such as Judas Maccabaeus, that are performed annually surrounding the celebration of Chanukah and is loved by singers and listeners alike. Yet, few of us are acquainted with his lesser known works, for example the one-act oratorio, Esther, that tells the Biblical story associated with holiday of Purim. And Händel is among the most well known of composers even today! So too it is for the composer, Ephraim Abileah, whose little known oratorio, "Chag Hacherut" (Festival of Freedom) tells the Passover story and was performed on stage only once in Haifa. Although a conversation with his grand daughter-in-law, Cilla Grossmeyer Abileah in Jerusalem revealed an Abileah family tradition at Passover each year that reenacts the oratorio at the homes of and among family members. But the angelic sound of a children's chorus singing Abileah's melody in the context of his original oratorio introduced the tune that most of us have come to know and love as "our" Mah Nishtanah, our sacred melody that reintroduces annually the retelling of the Passover story.

Ephraim Abileah died in 1953, but his musical legacy, as passed down from one father to his son (V'higad'ta L'vincha, and you shall tell this historical tale from one generation to the next), lives on in us through his music. So this year when the youngest child once again begins the sing-song chant and we ask "Why is this night different from all other night?" - we may wish to begin our answer with the recounting of this story of Ephraim Abileah, composer of the "Israeli" Mah Nishtanah!