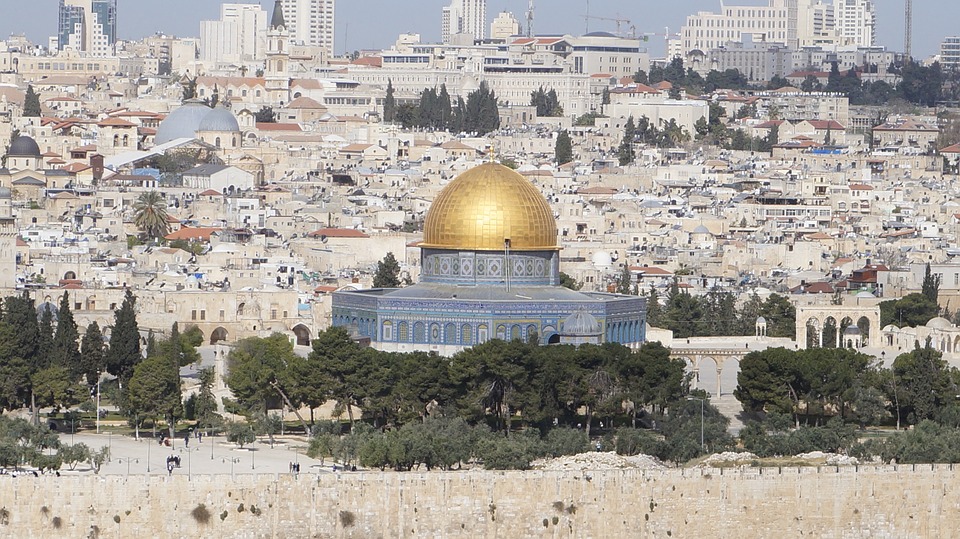 “As you shift your gaze from the Mt. of Olives towards the West, you can see the walls of the Old City of Jerusalem. The golden dome – the Dome of the Rock/Kubat Al Sachra – clearly marks the skyline of ancient Jerusalem.”

Standing at the southern overview of Jerusalem, I have said these words countless times, having had the privilege to join countless travelers to Israel on their journey of a lifetime. These words are part of a general introduction, shared with travelers, who have very recently landed at Ben Gurion airport, collected their luggage, gathered around their rabbi or cantor, ascended to Jerusalem, and taken their first steps into the Land and State of Israel.

“According to Islam, The Dome of the Rock is believed to be the site from which Mohammed ascended to heaven. In Jewish tradition, the rock below the dome is the rock on which Abraham almost sacrificed his son Isaac. Fortunately for us, this didn’t happen, or we are most likely not having this conversation.”

The daze of the arrivals halls usually doesn’t faze the weary travelers.  As long as their travels may have been, as many sleepless moments they may have endured, it is precisely at this moment that their adrenaline kicks in. Meeting the smiling Israeli guide is exactly what they have been waiting for, and are more than ready to head to the bus, say “Shalom” to the driver, and set out on their way.

“The walls of the Old City are only about 500 years old – in the grand scheme of this land – not very old. They are, however, built on foundations of much older walls, built 2000 years ago.”

With my back to the road, one hand on the mic, the other anchored firmly on the overhead compartment, it is always powerful to see the wonder in their eyes as we drive through the Shfela (Judean) foothills, pass by the chassis of War of Independence era trucks, follow the ever expanding road, just south of the village of Abu Ghosh, and make our final approach to the capitol. Truthfully, this wonder is often hidden behind closed eyelids, but I know that in just a few moments, many will be seeing Jerusalem for the very first time. An integral part of the role of the guide is to know when not to speak. The moment the bus crosses that last ridge, following the topographical contours of the road, is one that is best shared in silence.

“From the Dome of the Rock, moving along, we can see the grey domes of the Church of the Holy Sepulcher; for many streams of Christianity, their most holy site. As our view departs the Old City, we encounter the New City of Jerusalem, the King David Hotel, YMCA, the first neighborhoods and the newest buildings. Scattered amongst them all, we can see the national bird of Israel – the crane.”

(This remark is usually when a brief awkward silence penetrates the moment, but soon enough, is followed by laughter – real or forced – it doesn’t matter. This particular joke is one that has been told by generations of guides, and for just as long, has been as painful to say as it has been to hear. The levity the moment provides is worth it, however, as the group begins to internalize the idea that if the guide is brave enough to share such a joke, this has to be an open and safe environment for all.)

Heads turning left and right, a Jerusalem-themed song filling the inner sanctum of the bus, and stolen glances with loved ones, it becomes clear – whether it is their first actual time in Israel or a return trip -- this is the very first time we are all seeing Jerusalem together, and there is something sacred in that realization.

“How fortunate are we to have – built into our Jewish tradition – tools that help us find words to express those moments when we are speechless. The Shehecheyanu blessing is one such tool. A blessing said or sung, with guitar or without. A blessing for new moments or for moments that have been renewed.”

Soon, the group will mark the moment in another traditional manner – the first group picture. But for now, as they join their clergy in these ancient words, arms around each other, swaying slightly, I can only imagine that that for them, this path of “new beginning,” is one in which the past meets the present, the memory of others no longer with us, is as present as the memories being created, even as they look out onto the convergence of the old and the new unfolding before them.

Regardless of how many times I have seen this moment unfold, I always find myself in the moment and a part of it. How lucky am I?