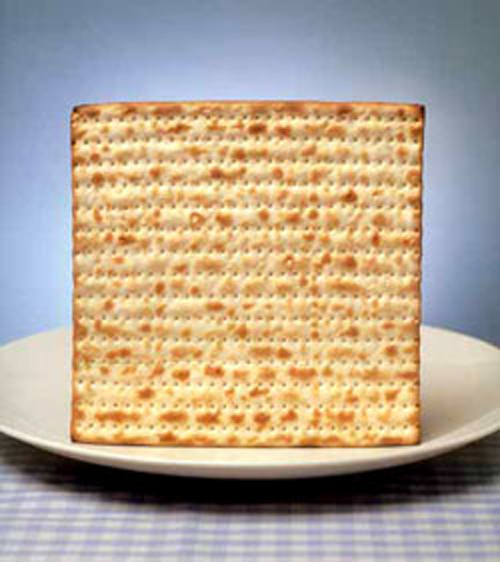 More often than not, the history of the Jews is one of upheaval rather than stability. It is the story of migration, change, renewal… and more change.

Through it all, though, one phenomenon has endured and held its own for millennia: a very humble food product fashioned from wheat, water, and salt. Matzah.

“Where did matzah come from?”

Matzah, the unleavened bread that the Israelites ate as they hurriedly prepared to leave Egypt for the Promised Land, continues, even thousands of years later, to be consumed during Passover by their latter-day descendants – us contemporary Jews.

Each year come Passover-time, the shelves of supermarkets throughout North America crow with box after box of identically shaped, neatly perforated sheets of matzah. How many ritual foodstuffs do you know that go back that far and are mass-produced today?

Matzah's longevity is even more remarkable given our fickle palates and modern penchant for indulging in and then discarding one gastronomic trend after another.

Add to the mix the availability of whole-wheat matzah, salt-free matzah, tea matzah, and various other self-styled artisanal matzahs, and it becomes clear that the staying power of this ancient food is nothing short of remarkable.

“Is today’s matzah the same as the kind that ancient Israelites ate?”

In a word, no. Scholars of the ancient Near East are quick to point out that the matzah we eat today is probably not quite the same unleavened bread our ancestors consumed way back when.

For one thing, the type of grain the Israelites used was undoubtedly a different species than what's produced in North American today.

The size and overall appearance of matzah in the ancient world was likely a far cry from ours, too: much larger, more disc-shaped (the Bible refers to "cakes" of matzah), and far more roughhewn around the edges than our own.

“Where did modern-day matzah come from, then?”

Our contemporary notion of what constitutes authentic matzah is itself a relatively recent invention, an artifact of modernity, says the research of Brandeis University Professor Jonathan Sarna.

Well into the 19th century, matzah was made by hand in dark, unheated basements to prevent the dough from rising. The shape of the matzah was irregular, at best, and packaging came in the form of newspapers rather than sanitary boxes.

More to the point, though, the very idea of industrializing and standardizing matzah production was anathematized by leading rabbinical authorities of the time.

By 1838, a device had been invented that could mechanically knead matzah – but European rabbis expressed grave reservations about it, some going so far as to pronounce it treif (not kosher).

Many of them feared that mechanization would destroy the livelihood of those who had traditionally earned their modest keep by kneading and rolling matzah dough; others worried that stray contaminants might work their way into the matzah, rendering it unfit for ritual consumption. And others were simply unready to come to grips with the manifold challenges modernity posed to the traditional, time-honored way of doing things.

It took quite a while to convince the rabbinate – and with it, traditional elements of both European and American Jewish society – that the mechanization of matzah might well be a boon rather than a drawback.

“So… who ultimately gave us mechanized matzah?”

Manischewitz took great pains to secure the approval of the leading Torah sages of Jerusalem. He won their consent he won by trading on his own yichus (pedigree), cultivating close ties with the rabbinical establishment of the Holy Land, and demonstrating his religious rectitude and noble intentions by establishing a yeshiva in Jerusalem that bore his good name.

He subsequently displayed their endorsement in both English and Hebrew on the exterior of his mass-produced matzah boxes: “There is none more faithful to be found.”

“What finally convinced the public to embrace mass-produced matzah?”

At the Manischewitz plant, it was said, that "no human hand touches these matzahs.” Other factories, such as Horowitz Bros. & Margareten (whose owners boasted that they followed "carefully computed formulae”) also made much of the felicitous union between modernity and tradition.

Much was made, too, of hygiene. In an effort to persuade Jewish consumers to relinquish their tried-and-true ways of doing things (e.g., purchasing old-fashioned, irregularly shaped matzah, loosely wrapped in newsprint), modern-day matzah manufacturers appealed to what, earlier in the 20th century, had already become an issue of great concern: the fear of germs.

Drawing on what was then called "antiseptic-consciousness," they spoke lyrically of their sun-flooded factories and of the "sanitary and painstaking conditions" under which modern-day matzah was made.

“How did boxed matzah become so popular?”

These pitches (the handiwork of lyricist and Yiddish lexicographer Nahum Stutchkoff) and dozens more like them endowed Manischewitz matzah with attributes worthy of Mother Nature herself: "burnished," "pearl-like," and "bright as the rising sun."

If neither health nor peppy jingles did the trick, there was always the recipe.

Sometime during the interwar years and peaking in postwar America, test kitchen cooks and Jewish cookbook authors joined forces to broaden matzah use beyond the boundaries of the seder and to avoid "matzah monotony" by adapting the ancient foodstuff to modern tastes.

Appealing to what one food writer of the 1930s called the "unusual recipe-consciousness" of America's Jews, new and imaginative uses included everything from making spaghetti out of matzah meal to fashioning farfeloons, a macaroon-like concoction, from matzah farfel.

So pliant and versatile was matzah that the organizers of the 1939-1940 World's Fair invited Horowitz Bros. & Margareten to showcase a model matzah factory on the grounds of an international exposition devoted to "Building the World of Tomorrow." Historians aren't sure why the exhibit never materialized, but the very idea of a matzah factory at the World's Fair underscored the possibility that tradition could make its peace with the modern era.

Industrialized, standardized, advertised, sung about, and otherwise reimagined, millennial matzah lent itself admirably to adaptation. Under these circumstances, is it any wonder that so many American Jews found it difficult to resist what one, in 1911, described as the "call of the matzah"?

Then, as now, there's something in that ancient amalgam of water, wheat, and salt that speaks of hope.

Learn to make matzah at home with a tutorial from food blogger Gabi Moskowitz, then check out 5 easy, Passover-friendly lunches the whole family will love.

Jenna Weissman Joselit is a cultural historian of American Jewish life and the author of The Wonders of America: Reinventing Jewish Culture.