Passover: The Mystery of the Fifth Cup 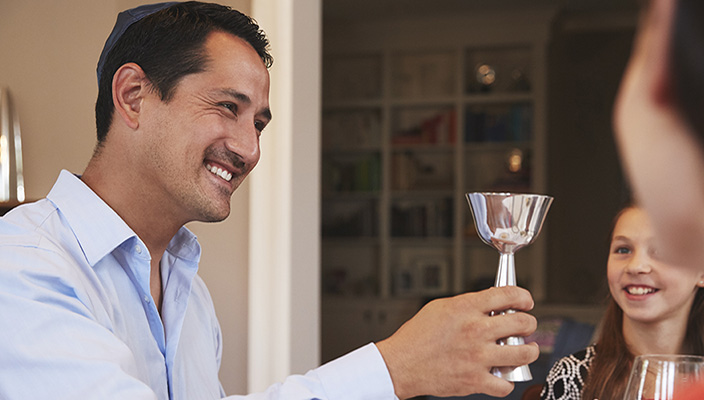 No matter how many guests attend our Passover seders, there is always room for one more: the prophet Elijah, for whom we fill an additional cup of wine. But what does Elijah have to do with Passover? Why do we open the door for him? And what has made him one of the most ubiquitous figures in Jewish folklore?

In chapter 17 of the book of I Kings, Elijah is introduced as a Tishbite, Gileadite, and prophet (as reflected in the first three lines of the song: "Eliyahu ha-navi, Eliyahu ha-Tishbi, Eliyahu ha-Gileadi"). His prophetic status, however, differs from that of the other literary prophets whose oracles became books of the Bible. Elijah was a miracle worker and a messenger of God.

Typical of the often fanciful miracle stories involving Elijah in post-biblical literature is one in the talmudic tractate Kiddushin [40a] that tells about the virtue and the poverty of a certain Rabbi Kahana. He told a powerful woman who had made advances toward him that he had to get himself ready for their tryst; instead he went up to the roof and hurled himself off to avoid sinning. Enter Elijah, who caught him and then reproached him: "You have troubled me to come a long distance to save you." When the rabbi replied, "I was forced to do it due to my poverty," Elijah gave him a basketful of dinars.

My favorite Elijah story, Naboth's Vineyard (I Kings 22), however, is not about a miracle but about social justice. After King Ahab commits the heinous sin of coveting a neighbor's vineyard and having the neighbor executed in order to take possession of his vineyard, Elijah demands justice: " Would you murder and take possession?" Ahab then confesses his sin and humbles himself before God.

In addition to miracle worker and zealot for justice, Elijah took on a messianic role. The credit for this transformation belongs to the prophet Malachi, whose book concludes with a prophecy about the "end of days," when… "I will send the prophet Elijah to you before the awesome fearful day of Adonai" (3:23).

Where did Malachi get the idea that Elijah would be the precursor of the "fearful day of Adonai"? From the belief that Elijah is the only biblical hero who never died! The Bible is quite specific about the deaths of the Patriarchs, as well as Moses (Deuteronomy 34:5), David (I Kings 2:10), and other heroes. But Elijah left earth suddenly on "a fiery chariot with fiery horses" and went "up to heaven in a whirlwind" (11 Kings 2:11).

According to Malachi, Elijah was immortalized so that at the end of days God could send the prophet back to earth with a message of hope ("He shall reconcile parents with children and children with their parents...") that would inspire the people to return to God and avoid "utter destruction."

It was not only God, though, who chose Elijah for the great task "at the end of days." Jewish folklore from the talmudic era down to modern times needed a character who might intercede for the powerless and bring comfort through all the centuries of persecution and wandering, and it was in response to this need that the legend of oft-appearing, usually incognito Elijah emerged. It is in this role of messianic precursor that Elijah has become associated with some of our most beloved holidays, blessings, and rituals, from havdalah, birkat ha-mazon, and b'rit milah, to, of course, Passover.

In most Jewish communities the popular song Eliyahu Ha-Navi is sung during the havdalah service marking the conclusion of Shabbat, a tradition that goes back to at least the eleventh century; Sephardic communities add an elaborate 28-line poem glorifying Elijah. These customs are based on the talmudic notion that Elijah will announce the advent of the Messiah at the conclusion of Shabbat (Eruvin 43b), which is supposed to be a foretaste of the messianic age. Having lived in hostile environments through most of history, Jews valued the Sabbath not only as a sacred day, but also as a respite from the trials and tribulations of the often onerous workweek. And so, as Shabbat would end, they sang of a better time when Elijah would come and declare the advent of the Messiah and the end of all human suffering.

In the same spirit of seeking comfort in times of adversity, around the eleventh century a verse was added to the birkat ha-mazon (prayers of thanks after meals) petitioning God to send Elijah with the news of the forthcoming redemption: "Harahaman hu yishlach lanu et Eliyahi Ha-Navi-May the Merciful One send us Elijah the Prophet, whose memory brings us blessing, so that he may tell us the good news of redemption, victories, and comfort."

After a baby boy is brought in to be circumcised, the mohel (ritual circumciser) traditionally places him on a special chair and announces: "This is the chair of Elijah." The origin of this tradition is an eighth-century midrashic commentary (Pirkei de-Rabbi Eliezer) on the biblical story in which Elijah angrily complains to God that "the Israelites have forsaken Your covenant" (I Kings 19). According to the midrash, God responds by commanding Elijah to be present at every b'rit milah (covenantal circumcision service) to be a witness to this dramatic evidence of the loyalty of the Jewish people to the b'rit (covenant).

While the best-known explanation of why we welcome Elijah on Passover is his role as herald of the messianic age, this, in fact, is not his primary function at the seder, at least not when the tradition started. Back in the second century, when the sages were establishing the rituals of the seder, a disagreement arose as to whether there should be four or five cups of wine.

The custom of drinking multiple cups of wine derived from God's promises to the enslaved Israelites. Four promises follow one another in rapid succession within Exodus chapter six, verses six and seven: " I will free you...", "I will deliver you...", "I will redeem you...", "and I will take you to be My people." Then, after an intervening verse, a fifth promise appears: "I will bring you into the land...." Each cup of wine is a symbol of the joy we feel as beneficiaries of God's promises. But is the fifth promise connected to the prior four, or is it a separate promise? On this the rabbis could not agree. Some said there should be four cups in honor of four promises; others said five cups for five promises.

The Talmud uses the Aramaic word teku to indicate that the rabbis could not reach a decision on a matter under discussion. And so the decision as to the number of cups was left teku, but the Passover haggadah prescribes four cups for us to drink-possibly as a parallel to the four questions and the four sons. But just in case there really should be five, the writers of the haggadah called for an additional symbolic cup.

How did this symbolic fifth cup come to be known as "the cup of ElijahElijah's cupכּוֹס אֵלִיָּהוּA special cup used during the Passover seder to symbolize Elijah, who symbolizes the coming of the Messianic age. "? Ah, that takes us back to that word teku.

Nobody is certain of the derivation of teku (which, by the way, is also used in Israel today when a soccer match ends in a tie). It may derive from tekum, meaning "it will stand," i.e., "it will remain a question." A folk etymology, though, has it that teku is an acronym for " Tishbi yetaretz kushiot v-abayot-the Tishbite [i.e., Elijah] will answer all unresolved questions." According to this folk belief, the first thing Elijah will do after he returns to the Jewish people to proclaim the advent of the messianic age is to resolve all those questions of Jewish law that confounded the rabbis.

Later folk literature would often introduce Elijah as the savior in all-too-frequent situations when communities of Jews were in dire straits. Out of nowhere and often disguised, Elijah would appear and foil the wicked plot. Again, why Elijah? Because he was the hero who could call down miracles; he was the intimate of God who never died; and he was the intercessor who would zealously plead the cause of his people. And so, Jews continue to venerate him-at every meal, at the end of every Sabbath, at circumcisions, and, most famously, at our Passover seders.

Rabbi Simeon J. Maslin, a past CCAR president, is the author of several books on Jewish practices, including the recently published ...and turn it again, from which this article is adapted.