Quiz: What Do You Know...about Synagogues? 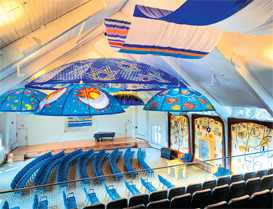 Do you know as much about synagogues as you think you do? Take the quiz.

1. According to Jewish tradition, which of these features is necessary in order for a building to be considered a synagogue?
a. Carpet
b. A window
c. Pews
d. A good sound system

3. What will you almost always find above where the Torah scrolls are housed?
a. A chuppah (canopy)
b. A box of prayer shawls
c. An Eternal Light
d. A Star of David

4. Is it proper to place a mezuzah on the doorpost of a synagogue?
a. Yes, but traditionally only if people eat and sleep in the synagogue
b. Yes, all synagogues should have one
c. No, no synagogue should have one
d. Yes, but only if a rabbi lives in it

5. Is there a traditional prayer to say upon entering a synagogue?
a. No
b. Yes, "The Sh'ma," about how God is one
c. Yes, "Hinei Ma Tov," about how good it is to be together
d. Yes, "Ma Tovu," about the loveliness of the Israelites' dwellings

6. What direction do North American Jews face when standing and praying in a synagogue?
a. North
b. South
c. East
d. West

7. Why does a curtain appear in front of the ark?
a. To heighten the theatricality of the service
b. To remind us of the curtain around the ark in the Jerusalem Temple
c. To protect the Torahs from dust
d. To keep people from peeking at the Torahs during services

8. What do worshipers do in order to demonstrate respect for the Torah scroll?
a. Face it at all times
b. Reach out with a hand, prayer book, or tzitzit (fringes) to kiss it
c. Stand when the ark is open
d. All of the above

10. How is the weekly Torah portion selected?
a. The rabbi or cantor picks a portion that can be easily linked to a current event
b. By majority vote of the Ritual Committee
c. By that week's bar or bat mitzvah celebrant
d. According to a set schedule followed by most synagogues worldwide

1. B. In Berakhot 31a, Rabbi Hiyya bar Abba says, "One should always pray in a house with windows" because Daniel prayed in a house with open windows. Not all synagogues follow this custom, but many do.

2. A. Torahs are stored in arks, which can vary considerably in shape, size, decoration, and composition. A geniza is used to store holy texts and other items inscribed with God's name before they are buried; such texts are never to be discarded.

3. C. Usually hanging above or in front of the ark is an Eternal Light (ner tamid), representing the continually burning light on the altar of the Temple in Jerusalem.

4. A. A mezuzah is traditionally placed on the doorposts of a person's home, in accordance with Deuteronomy 11:20: "Write [these words] on the doorposts of your house and on your gates." Jewish tradition came to consider "home" any place where people sleep and eat. Hence, some synagogues have a mezuzah, and others do not.

5. D. The song "Ma Tovu" includes some words from Numbers 24:5, in which the diviner Balaam praises the beauty of the Jewish people's dwelling places. Singing this song when entering the synagogue is a means to acknowledge the loveliness of the synagogue as well as Balaam's blessing.

6. C. Jews worldwide face toward the site in Jerusalem where the Temple once stood. In the United States and Canada, worshipers face East, toward Jerusalem. Jews to the East of Jerusalem face West, Jews to the North face South, and Jews to the South face North.

7. B. Like many other items in the synagogue, the curtain in front of the ark reminds us of the ancient Temple in Jerusalem-in this instance, recalling the parochet (curtain) that once screened the Holy of Holies in the Temple.

8. D. We demonstrate respect for the Torah scroll in all these ways and sometimes in others, such as dressing the Torah with a colorful covering and placing a breastplate and crown upon it.

9. A. Beit knesset, meaning "house of gathering," always refers to a synagogue, a place where people gather to pray, among other activities.

10. D. Following a set schedule allows Jews worldwide to read and study the entire Torah scroll in one year's time. Because of holiday timing, though, including the fact that in the diaspora we celebrate holidays for one day longer than in Israel, in some years and seasons the diaspora schedule deviates from the Israel schedule for about a week.