Normally, two loaves of elongated challah are served for Shabbat, but for the High Holidays a round challah, sometimes containing raisins, is customary. The round challah is fraught with meaning. It is symbolic of the crown of God, our Sovereign; it represents a year filled with neverending good. A ladder of dough placed on top represents the question of who will ascend or descend in health or wealth in the coming year. A lesser known custom is to bake the challah in the shape of a bird, based on Isaiah 31:5, “As hovering birds, so will the Eternal protect Jerusalem.”

Moist, cake-like challah is a big hit at my Rosh HaShanah open house. Divide the dough into two-thirds and one-third to make two loaves, but never use all the dough to make one giant crown, or the center will surely be raw after the normal baking time is reached. 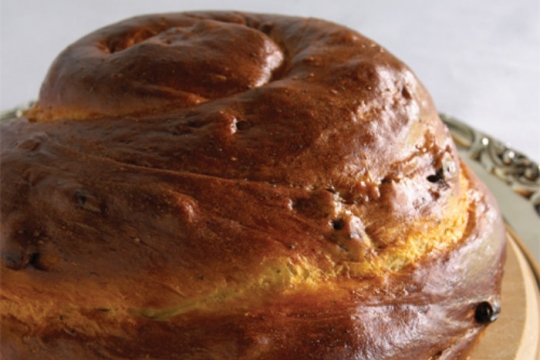