This second edition of Rabbi David J. Zucker’s American Rabbis: Facts and Fiction (Wipf & Stock) chronicles the role of rabbis in Jewish life, past and present. The author’s unique contribution to the subject is a comparison of how rabbis have been portrayed in fiction – novels, short stories, plays, television, and online streaming – with the realities of this often challenging occupation.

Rabbi Dana Evan Kaplan’s foreword to the new edition combined with the foreword to the 1998 edition by Hebrew Union College-Jewish Institute of Religion (HUC-JIR) Professor Stanley F. Chyet and the author’s new introduction set the framework for the book’s reader-friendly content.

Rabbi Zucker, a retired congregational rabbi in Great Britain and the U.S., a long-term care chaplain, university professor, and author of several books, articles, and book reviews, discusses a wide range of topics related to the rabbinate and Judaism in general.

In addition to a brief history of the American rabbinate, he provides an update on rabbinic training. He describes the current state of the Reform, Conservative, and Orthodox movements and compares mainstream rabbis to sectarian Orthodox rabbis.

In one chapter, congregants air views of their rabbis, and in another chapter, he describes how rabbis view themselves and their profession. He writes:

Though there are many frustrations and incredible stresses in congregational life, the fact is that most rabbis love being in their positions. There is enormous satisfaction in being the one who offers comfort and consolation to a mourner, the one who serves as officiant at a life-cycle ceremony, being the one who acknowledges another milestone in a Jewish life.

In other chapters, Rabbi Zucker talks about rabbis’ families, assimilation, intermarriage, the issue of patrilineality, human sexuality, Jewish beliefs about God, and the importance of Israel to Jews today.

In what I consider the most interesting chapter, Zucker discusses female rabbis. He acknowledges that the most consequential historical change in the rabbinate occurred in 1972, when HUC-JIR ordained America’s first female rabbi, Sally Priesand. When the first edition of Zucker’s book appeared in 1998, there were about 400 female rabbis; there are now approximately 1,600. They fulfill all rabbinical functions: spiritual leaders of congregations, educators, chaplains, Hillel chaplains and directors, administrators of rabbinical organizations and seminaries, scholars and professors, therapists and social workers.

The author examines their professional and personal lives, as well as those of male rabbis and discusses at length the changes in the rabbinate and in Judaism brought about by female rabbis. It is in this discussion about female rabbis that Zucker’s inclusion of fictional views of rabbis as compared to “reality” is most enlightening. (In full disclosure, the fictional Sandra Miller-Brownstein, a character in my novel, Hear My Voice, and one of the first female rabbis, ordained in 1977, appears in his discussion.)

I would like to have seen a more detailed discussion of the Reform Movement’s welcome of members of the LGBTQ community, which was a long and complex process. In addition, although Rabbi Zucker does a good job addressing the impact of Jewish feminism, he neglects the multicultural aspect of the Jewish community throughout the world – which includes increasing numbers and more widespread awareness of black, Asian, Latinx, bi-racial, and other non-Ashkenazi Jews.

In the Epilogue, Rabbi Zucker speculates about the future of the rabbinate in America. While admitting that predicting what Jews and Judaism might look like in future centuries is all but impossible, he projects an overall positive view:

So, when all is said and done, how are the Jews doing at the end of this second decade of the twenty-first century? Should we really be fearful of the future, should we be wringing our hands? I do not think so. The fact is that Jews and Judaism are doing very well.

I think this evaluation of the present security of Jews and Judaism is over optimistic, given the rise of antisemitism from both the political right and left, here and abroad.

Although I was especially interested in this book because my husband, daughter, and son-in-law are Reform rabbis, I think all who are concerned with the present condition of Jews and Judaism and the role of our spiritual and community leaders will enjoy and learn from this well-written and well-documented book. 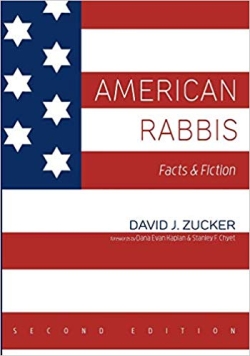