The answers are as varied as the lives and experiences of the women Nadell profiles. Some were strong in their religious identification and beliefs; others were barely aware of or hardly acknowledged their heritage. The common thread among activist women, from colonial times to the present, Nadell concludes, is their strong sense of self and a desire to repair the world – the Jewish concept of tikkun olam – whether or not they were aware of the link between their social consciousness and their religious and ethnic roots.

Rather than profiling the woman individually or strictly chronologically, Nadel instead presents each in the context of American history. A profile of devoted wife and mother Grace Mendes Seixas Nathan (1752-1831), for example, is juxtaposed with the story of her great-granddaughter the poet Emma Lazarus (1849-1887), who never married.

In the section titled “America’s Early Jewish Women,” Nadell reports that some became activists when they protested separate seating in synagogues. Others “became teachers, social reformers, and writers.” Like their Christian neighbors, they established hospitals, schools, and social organizations to help others – one of the earliest models being The Female Hebrew Benevolent Society founded in 1819 by Rebecca Gratz in Philadelphia. About 20 years later, Gratz founded the first Hebrew Sunday school, enabling women to establish careers as Jewish educators.

In the following section, “The American Jewesses,” Nadell focuses primarily on Jewish women who emigrated here from Germany, such as Rosa Sonneschein, a rabbi’s wife in St. Louis. While centering their lives on their homes, they also succeeded in founding a number of  Jewish literary and cultural organizations, advanced education for women, performed extensive charity work requiring large financial resources, and joined the burgeoning Zionist movement. Many had to “help out” in their husbands’ businesses. Some remained single, such as Julia Richman, the prominent New York City school superintendent.  This era, the author notes, marked an increasing acceptance of women who did not marry.

In “Eastern European Women in America,” the section that details a period of massive Jewish immigration, Nadell points out that women newcomers followed many different paths. Some kept their traditions; others cast off their old ways, often encouraged by husbands who had come to the country earlier. She pays homage to the women who struggled to survive, many working in terrible conditions in garment industry factories or doing long hours of piecework in their homes. Many Jewish girls became prostitutes either willingly or because they were forced or tricked into it. Terrible social and working conditions gave birth to the labor union movement in which Jewish women were prominent, establishing, for example, The Women’s Trade Union League in 1903.

From the 1972 rabbinic ordination of path breaker Rabbi Sally Priesand to the ongoing campaign by Women of the Wall in Jerusalem to sing and read Torah at the Western Wall, the book traces the efforts of Jewish women to break down barriers to equality in worship.

I especially applaud Nadell not only for portraying outstanding Jewish women who challenged the rules and mores of their time, but also for paying tribute to the equally-challenging daily lives of Jewish women who, throughout this country’s history, have toiled in obscurity .

Readers – both women and men – will find much of interest in this informative and well-written book, in terms of the individual narratives and in the broader historical framework into which Nadell places them. 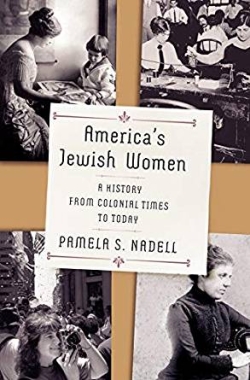