Book Review: The Art of Leaving: A Memoir

Ayelet Tsabari’s beloved father died suddenly shortly before her tenth birthday. She cites this traumatic event as the reason for her quest to find a permanent home and to find herself – the life journey she describes in this compelling memoir.

Realizing her inability to settle in one place, to choose one path above all others – probably out of fear it would be suddenly snatched away from her as her father was – Tsabari opts just to keep moving. In a series of essays, most previously published, The Art of Leaving: A Memoir (Random House) describes Tsabari’s rebellious service as a conscript in the Israeli army and her subsequent travels to India, Thailand, the U.S., and Canada.

She could not settle in anywhere, often literally camping out, and was always ready to move on to the next destination in the hope that one would be her permanent physical and psychological home.

In her search for self, Tsabari could not commit to relationships. She chronicles her romances and affairs in each place, always leaving the relationship just as she felt compelled to move from place to place. She even left the Canadian husband whom she had married in order to remain in that country, knowing as early as her wedding day that the marriage would be short-lived.

Tsabari was born in Israel to a large Yemeni family, marking her as an outsider because Yemenis faced discrimination by Ashkenazi Israelis. She explains:

Upon arriving in Israel, Yemeni Jews were regarded as savages, with their plural wives and many children, their lack of table manners and superstitious beliefs in demons and spirits. Their traditions were undervalued and mocked….the patronizing belief that Yemenis were unfit to parent and had more children than they could manage helped rationalize heinous crimes such as the systematic abduction and forced adoption of hundreds of immigrant children, most of them Yemeni…from transit camps and hospitals.

This feeling of “otherness” in Israel contributed to Ayelet’s quest for acceptance and permanence.

Growing up, I had often felt out of place in my own country.  It had to do with my father; grief shakes the foundations of your home…It might have also had something to do with the exclusion of my culture from so many facets of Israeli life, with not seeing myself in literature and in the media, with being taught in school a partial history about the inception of Israel that painted us as mere extras.

In her struggle to ground herself, Tsabari gradually comes to embrace her Yemeni roots and heritage. Much of this effort focuses on the story circulating in her family about her great grandmother deserting her grandmother and her twin sister at age 2, when she left Yemen for Israel by foot with her new husband.

Although her embittered grandmother holds firmly to her version of the desertion story, Tsabari discovers that the events may not have been as clear-cut as she and others in her family had always believed. Did her great grandmother really have a choice about leaving her toddlers behind? Was she therefore blameless for her actions? Can revisiting this family saga help Tsabari better understand herself and her own actions?

Tsabari finally finds meaning and permanence in her life as she embraces her family’s history, resumes the promising writing career she had shown such talent for as a child (and which had been encouraged by her father), and becomes a devoted mother.

One of the book’s strengths is the story of Yemeni Jews’ struggle for acceptance in Israel and its descriptions of Yemeni history, customs, traditions, and food.

I would have preferred a chronological rather than thematic approach to the memoir but found much to like in the vivid and moving writing style and insightful observations of Ayelet Tsabari, who was awarded the Sami Rohr Prize for Jewish Literature and the Edward Lewis Wallant Award for Jewish Fiction for her previous work. 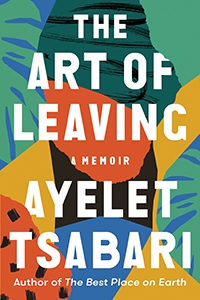