Book Review: Dreams Deferred: A Concise Guide to the Israeli-Palestinian Conflict and the Movement to Boycott Israel

For all the talk about Israel being the “third rail” of Jewish life – and there is no denying that its politics can be divisive – in truth, communities can find a lot of common ground. Most American Jews occupy the spacious center located between the poles of the extreme right, with its ideology of “Greater Israel,” and the extreme left, which rejects the very foundations of Israel’s right to exist.

Despite the well-publicized divisions among us, we hope the mainstream can agree on these principles:

I suspect a large swath of American Zionists would be located in the “sweet spot” of the pro-Israel center that this list defines. It also embraces many people of good faith with a variety of political positions, from the left to the right, in Israel and America.

If you find yourself nodding in agreement with these bullet points, especially the final one, then Dreams Deferred: A Concise Guide to the Israeli-Palestinian Conflict and the Movement to Boycott Israel is for you. It is an articulate, nuanced guide to debunking the myths of the BDS movement, and it does so with the reasoned voice of the political center. It is not extremist; rather, it reminds us that it is the BDS supporters who are the extremists.

In 60 short essays, most of which are no more than three to four pages, Cary Nelson, a professor of English at the University of Illinois, a respected reformer in academia, and the book’s editor, has assembled an array of writers who meet the BDS challenge head-on. The contributors come from different realms of academic life, but all share a crucial postulate: “[They] are unequivocally opposed to the effort to boycott and eliminate the state of Israel, and [support] a two-state solution to the Israeli-Palestinian conflict.”

BDS is no benign peace faction, despite the illusions of many an impressionable college freshman. It is not a nonviolent civil rights movement designed to bring about “two states for two peoples.”  Its ambition, to quote BDS founder Omar Barghouti, is “euthanasia” for the State of Israel.

The roots of BDS spring from the 2001 United Nations World Conference on Racism in Durban, which memorably devolved into an orgy of anti-Israel rhetoric. The movement gained momentum by launching boycotts against Israeli scholars in Great Britain and urging American universities to divest from companies that did business with Israel.  Concomitantly, Students for Justice in Palestine (SJP) was established at the University of California, Berkeley, to organize anti-Israel rallies and to disrupt pro-Israel events on college campuses. Since then BDS activism has spread, often with violent confrontations at cynical events such as “Israeli Apartheid Weeks.” Even though hundreds of universities have issued statements opposing divestment campaigns, the movement often gets a tacit nod of encouragement from faculty.

BDS leaves no room for complex analysis of complex problems, where both sides have valid narratives and both have contributed to the stalemate. In its view, Israel is the criminal; the Palestinians are the exclusive victims; and the solution is the eradication of the Jewish State.

In essays that describe the manipulative distortions employed by the anti-Israel movement, and a sober, centrist guide about how to respond, Nelson, et al, debunk myths of different manifestations of BDS, represented in this sampling of chapter headings: “Academic Boycotts,” “Divestment Campaigns,” “‘From Ferguson to Palestine’,” “Holocaust Inversion,” “Pinkwashing (LGBTQ),” “The Iron Dome,” “Cultural Boycotts,” “The Intifadas,” “BDS and Christian Churches,” “The Nakba,” “Jewish History Before Zionism.”

It is too simplistic to say that all incoming college freshmen should purchase Dreams Deferred. In truth, high school students need a serious curriculum about the how’s and whys of Zionist history and the complexity of modern Israel. Still, a friend might want to contribute a number of copies to the local Hillel – or to the library of a neighboring minister.

Dreams Deferred will be a tremendous resource for anyone who is upset by slanders against Israel, who shudders for the present reality of Israelis and Palestinians, or who yearns for a better future. That is, for all of us who make up the sensible center. 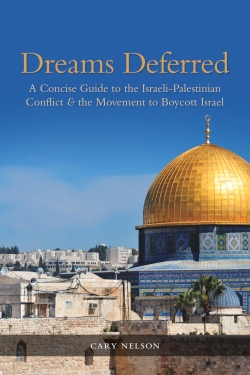