The year is 1939. With the horrors of the Holocaust approaching, Eli Rosen, his wife Esther, and their 5-year-old son Izaak are trapped in Lublin, Poland. In 1946, Eli and Izaak are living in a Displaced Persons camp in post-war Germany as Eli searches for his missing wife and attempts to rebuild his life. In 1965, now in America, Eli continues the quest for justice he promised himself and his son he would pursue.

Ronald H. Balson, a trial attorney and educator who won a National Jewish Book Award in 2018, relates Eli’s journey in Eli’s Promise (St. Martin’s Press, 2020), a historical novel, by alternating between these three time periods. What connects them is Eli’s relationship and confrontations with an unscrupulous German Nazi collaborator, Maximilian Poleski.

When the Nazis invade Poland in 1939, we find Poleski peddling expensive visas for America to Jews desperate to flee. He works for Eli and his father, owners of a successful construction company. The Nazis appropriate the company and hand it to Poleski, but he needs Eli and his father to run it for him. In return for their work – and Eli’s frequent bribes – Poleski vows to protect the entire Rosen family.

Poleski exploits Eli’s labor, but double crosses him and fails to protect them, especially Eli’s wife, now a slave-laborer in a Nazi factory in another town. As time passes, Esther disappears. Poleski promises to tell Eli where she is, but he is arrested by the Nazis for embezzling money from the construction company they had confiscated. Assuming that the Nazis executed Poleski, Eli sets out to search for Esther on his own.

While living in an Allied-run displaced person’s camp from June 1946 to May 1947, Eli continues looking for Esther. When he becomes involved in the camp administrators’ plan to arrest a black marketeer named Maximilian, who is selling expensive visas to camp residents, he realizes his wartime nemesis Poleski is alive and using an alias – but once again, the villain escapes retribution.

In the sections that take place in Chicago from May 1965 to March 1966, Rosen, now working for the U.S. government, is tasked with helping expose massive corruption in arms production and acquisition for the escalating Vietnam War. At first, the reader may wonder how this third time period section is connected to the other two, but as the story unfolds, we realize that Eli might finally have a chance to keep his promise of bringing Maximilian Poleski to justice.

Writers of historical fiction face a difficult challenge: They need to provide the reader with extensive background material for understanding the circumstances and context of the story. At the same time, they must magically transport us into the characters’ minds and lives.

Balson provides a massive amount of factual exposition throughout the novel, especially in the earlier section. Though this background information slows down the pace of the narrative, its inclusion is necessary to help us understand the desperate circumstances of the characters as the story plays out. And though we know the historical outcome of the Holocaust, Balson’s characters could only act on what they knew at the time.

We know, for example, that Esther is wrong when she naively says to Eli: “Floodwaters reach a level and then recede. This madness will pass…At some point, life in Poland will stabilize, the ship will right and things will return to normal.”

Esther is similarly overly optimistic when the Nazis are about to send her off to a far-away labor camp and she tells her worried husband, “I will come back, that’s a promise. Don’t worry about me; I’ll be fine.”

Balson’s carefully researched facts add to the reader’s knowledge. I was especially interested in the Rosens’ life in the DP camp because, as I think is true of most people, I had little knowledge of what went on these camps. As a child, I knew only that my father’s cousin had to spend several years in a DP camp after the war because she had contracted tuberculosis. She was finally liberated in the 1950s and able to join her family in America, only with the help of my father, who pecked out on his Smith-Corona typewriter hundreds of letters to U.S. officials urging her release.

Balson’s skillfully written is novel is often wrenching to read but a highly rewarding experience nevertheless. 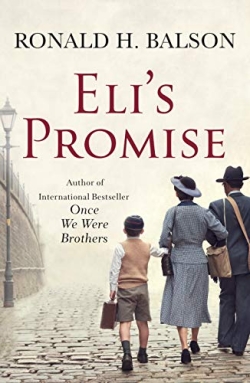