Family Papers: A Sephardic Journey Through the Twentieth Century (Farrar, Straus & Giroux), by prominent historian of the Sephardic community, Sarah Abrevaya Stein, tells the riveting story of a large family descended from Sa’adi Besalel Ashkenazi a-Levi, a prominent resident of Salonica (now Thesaloniki, Greece) when it was part of the Ottoman Empire.

At that time, Jews, primarily Sephardim who were expelled from Spain and Portugal, constituted approximately 50 percent of the population of the great port city. They participated in every level of economic, social, and cultural life there – as dockworkers, tobacco and factory workers, teachers, shopkeepers, prosperous merchants, and high officials. Sa’adi’s family was part of the city’s cultural elite. He was an important journalist and printer, founding a newspaper that chronicled Jewish life.

Dr. Stein, the Sady and Ludwig Kahn director of the Alan D. Leve Center for Jewish Studies and professor of history, who also holds the Maurice Amado Chair in Sephardic Studies at UCLA, meticulously traces the family’s physical and psychological journeys throughout the 20th century via letters, diaries, and other documents saved by various family members throughout the world. She also located and interviewed the few surviving family members.

She begins her study with a memoir written by the founder of the dynasty, Sa’adi – 95 pages written in a simple notebook, passed through four generations of the family. Dr. Stein discovered other family documents written in eight languages in South Africa, England, Canada, France, Greece, Germany, Hungary, Israel, Portugal, Italy, and the United States. They are, Stein says,

…spread across nine countries and three continents. The single largest collection, the papers of Leon Levy, is kept by his four grandchildren in a private vault in Rio de Janeiro. It consists of nearly 5,000 handwritten and typed letters, telegrams, photographs, legal and medical documents, and miscellanea…by far the largest private archive I have encountered as a professional historian and near obsessive document hunter.

She devotes brief individual chapters to various members of the family throughout the 20th century. She traces, often in their own words, those who emigrated to England, France, Germany, Brazil, and other countries for business reasons – even at the height of prosperity in Salonica.

Others left when Salonica became a Greek city with a Christian majority, and still others when the Ottoman Empire collapsed and when they fled, or attempted to flee, before and during the Holocaust. She details the fates of those who were imprisoned or murdered by the Nazis. Thirty-seven members of the immediate Levi family died in the Holocaust. “Only one,” Stein writes, “among the dizzying number of relatives deported to the east survived the war: Jacques Levy.”

According to Stein, “Genocide eradicated 98 percent of the Jews who remained in Salonica during the Second World War, leaving survivors crippled by one of the highest rates of annihilation to affect a single community in Europe.” (The fate of Sephardic Jews during the Holocaust is not generally well known – this is now changing through the efforts of Stein and other scholars.)

From these documents and interviews, Stein culls details of individual, personal lives – in Salonica, in exile from their beloved city, and once again in Salonica, for the few who returned after the war. She also traces their relationships to each other, often revealed in letters seeking financial assistance from relatives, especially during the war years. There was a paucity of correspondence, of course, during the war; those out of danger desperately sought information about their loved ones trapped in Europe and were devastated when the sad news did reach them.

In a few shocking chapters Stein documents the life of Sa’adi’s great- grandson, Vital Hasson, who enthusiastically joined the Nazis in torturing and murdering innocent people. Though he was eventually brought to justice, Stein had qualms about bringing his story to light, especially as many in the family didn’t know about this shameful episode or wouldn’t admit to themselves or to others his criminal past.

Aside from the fate of the family in the Holocaust, what comes across to me is this: No matter how prominent, wealthy, or important Jews in a given location may be, no matter how secure in the Diaspora they may feel, it can all disappear in an instant. The Jews living in Salonica at its height in the Ottoman Empire could never have imagined that their idyllic world would someday go up in smoke.

Reading Family Papers is an enthralling experience, not only for its emotional impact, but also for its revelations in a chapter of Jewish history about which little is written. Historians and others curious about the author’s academic process will be interested in reading the description she provides about her research methods and in her extensive footnotes and other documentation at the end of the book. 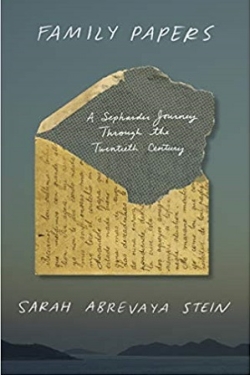