From drones to satellites, missile defense systems to cyber warfare, Israel leads the world in the development of high-tech weaponry, a legacy born of necessity. Since 1948, this country of eight million people has had to learn to adapt to changes in warfare and, in the process, has become a military superpower in innovation and efficiency.

In their new book, The Weapon Wizards: How Israel Became a High-Tech Military Superpower, military reporters and defense analysts Yaakov Katz and Amir Bohbot chronicle how Israel became one of the world’s top six arms exporters, accounting for about 10 percent of the country’s overall exports. In 2012, Israel’s 1,000 defense companies set a record, exporting $7.5 billion worth of arms.

Israel invests more than any other country in research and development – about 4.5 percent of its gross domestic product – which may account for why it continually tops the list as the world’s most innovative country. About 30 percent of this investment goes to military products, as compared to the 17 percent the U.S. spends for this purpose. And on the NASDAQ stock exchange, Israel has the third largest number of companies, after the U.S. and China.

So how did Israel do it? That is the central question The Weapon Wizards attempts to answer.

From its inception, Israel’s defense forces were outnumbered and outgunned, forcing those responsible for its defense to develop effective survival strategies, such as rapid improvisation and adaption to changing realities. As Reuven Gal, one of the country’s former deputy national security advisors, has written, “In the newly born Israel Defense Forces (IDF), the initial deficiencies in numbers, weaponry, and training were compensated for by dedication and motivation, intelligence, and improvisation. These eventually came to personify the Israeli soldier.”

Having few resources, the founders of the state learned early on that without creativity, their country might not survive. Few other countries in the world have been embroiled in conflict for as long or as intensely as has Israel. There is little margin for error when you’re surrounded by enemy armies just minutes away. Udi Shani, a former Defense Ministry director-general wrote: “We have innovative people, combat experience to know what we need, and immediate operational use for what we develop since we are almost always in a state of conflict.” And as Haim Eshed, the father of Israel’s satellite program, commented, “The shadow of the guillotine sharpens the mind.”

But adversity is only part of the answer; other countries have faced similar challenges. What makes Israel unique, say the authors, is its non-hierarchical structure, which spurs innovation: “The absence of hierarchy is evident everywhere in Israel – in the military, on the streets, and even in government offices, where low-level staffers call ministers by their nicknames.”

Ironically, this lack of structure is most evident in the place where one would expect to find the most discipline – the military. The IDF imbues soldiers with a strong bias against hierarchy and a keen sense of chutzpah (unmitigated gall). This breaking down of barriers creates an atmosphere that encourages and enables the free exchange of ideas. When officers of various ranks can converse with one another freely as equals, new ideas are generated.

Israel’s mandatory military service creates a melting pot, where people from different cultural and economic backgrounds come together to exchange ideas and learn new skills, generating a successful recipe for fostering creativity and innovation. In the IDF, poor Israeli kids who otherwise never would have had an opportunity to operate sophisticated technology get that chance. Kids who grew up without a smartphone at home are trained to become cyber operators. And, after military service, these skills are carried over into university studies and jobs.

The Weapon Wizards tells the story of how an ancient and stateless people returned to their homeland after 2,000 years and, against all odds, not only survived, but prospered. That would not have been possible without what former president and prime minister Shimon Peres described as the “richest resource” of Israel’s future – “the merit of the human spirit.”

The Weapon Wizards: How Israel Became a High-Tech Military Superpower will be published on January 31, 2017. 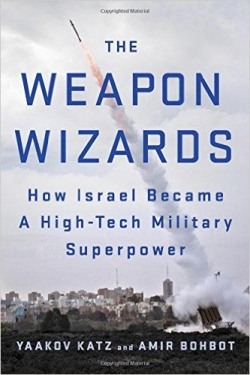