Book Review: Zionism: The Birth and Transformation of an Ideal

In Zionism: The Birth and Transformation of an Ideal (St. Martin’s Press), Milton Viorst – former Middle East correspondent for The New Yorker and author of numerous books and articles on that troubled part of the world – wants to know how Theodor Herzl’s vision of a Jewish refuge for a beleaguered people became “a military power where peace and security was thought about exclusively within a military framework.”

Viorst’s book is both a polemic and an engaging analysis of the history of Zionism as seen through the prism of its dominant leaders: Theodor Herzl, Chaim Weizmann, Vladimir Jabotinsky, David Ben-Gurion, Rav Abraham Isaac Kook and his son Zvi Yehuda Kook, Menachem Begin, and Benjamin Netanyahu.

The unmistakable message of the book is that the Zionist project was derailed along the way, and that only by grappling with how that happened can it be put back on track.

Viorst comes to his subject with a bias. He is extremely critical of how Israeli politics has taken a sharp turn to the right over the last four decades, and partly faults the political establishment in the United States, which he says “is willing to concede to almost any idea that the Israeli government has presented it with.”

To be sure, Zionist ideology has never been monolithic. From Herzl’s earliest days selling what, to many, seemed an unimaginable dream – Diaspora Jews returning en masse to the biblical Land of Israel after nearly 2,000 years of exile – the Zionist movement was made up of competing factions (socialist, cultural, revisionist, and religious). And there was no consensus as to the status and disposition of Arabs already living on the land.

Each wave of aliyah (Jewish immigration to Israel), whether from the shtetls of Eastern Europe or the mellahs of Morocco, brought its own mindset and aspirations, which are reflected in the divisions that exist to this day.

In looking for an answer as to how Zionism got off track, Viorst focuses on the split between mainstream Zionists (the followers of Herzl and Chaim Weizmann, Israel’s first president) and the so-called Revisionists (the disciples of Vladimir Jabotinsky, who espoused a maximalist view of how much territory could be claimed by Jews).

Jabotinsky had insisted that the diplomatic route to statehood was a “delusion”; only by force of arms could a Jewish state arise. His call was taken up by the Irgun, which, prior to Israel’s independence in 1948, carried out acts of terrorism against the British occupiers and Arab residents.

Even with the founding of the state under the leadership of the moderate David Ben-Gurion, revisionism survived as a minority faction under the leadership of Jabotinsky’s disciple, Menachem Begin, who defeated the dominating Labor Party in the election of 1977 and served as prime minister until 1983. Begin’s policies, become, in the words of Viorst, “more militant, less tolerant, more colonialist, more willing to play at the edge of international disapproval… He did not agonize over whether his decisions were good for Israel or the Jews. He wanted what Jabotinsky had taught him to want, and he moved expeditiously to get it.”

Viewing the West Bank as a non-transferable gift of God to the Jews, Begin empowered the settlement movement in what he called “Judea and Samaria” after the Six Day War in 1967. The religious justification for such thinking lay with Rabbi Abraham Isaac Kook, the first Ashkenazi chief rabbi of British Mandatory Palestine, and his son, Rabbi Zvi Yehuda Kook, who founded the right-wing settlers’ movement, Gush Emunim (Block of the Faithful). The chief rabbi believed that the modern movement to re-establish a Jewish state in the Land of Israel had profound theological significance and that the Zionists were agents in a heavenly plan to bring about the messianic era on the land that God had promised the Jewish people.

Viorst labels the current Prime Minister Benjamin Netanyahu, a “revisionist princeling,” noting that is father was the secretary to Jabotinsky and with him when he died. The son’s politics, suggests Viorst, are firmly rooted in a revisionism that has grown “only harsher” since Jabotinsky’s time. “Today’s Israel,” he writes, “is mired in Jabotinsky’s ideals, not Herzl’s.”

Viorst’s view that the Netanyahu government is unwilling to seek peace because it has no respect or sympathy for Arab nationalism will no doubt anger some readers. Hopefully, though, this book will get people to think more deeply about the century of factionalism that has informed Zionist and Israeli politics and policies, for better or worse. 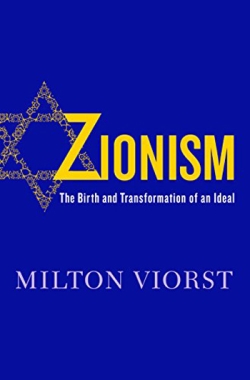