What Makes a Campus Jewishly Vibrant? 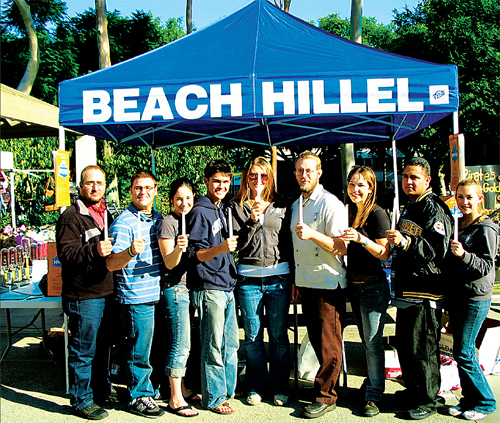 Yearly, as a high school guidance director and president of the Jewish interest group of the National Association for College Admission Counseling, I visit colleges throughout the U.S. to see how Jewish life is changing campus-wide. I've learned that the traditional criteria for what constitutes an active "Jewish" campus are not always the best; and other Jewish factors you may not have considered can be much more important.

In the past, two key indicators of a vibrant Jewish presence on campus were Greek life and the availability of kosher food. However, because Jewish fraternities and sororities are open to students of all religions, their numbers are not a good barometer of Jewish activity. Similarly, having a kosher food option may not indicate a high number of Jewish students, but rather that the college is trying to attract Jewish students.

What indicators, then, are more on target today? And what questions should you ask the school?

One of the hottest trends on today's college campuses is student-led Jewish programming. Organizations such as Hillel have discovered that if they can't get students into their doors, they can bring Jewish programs out to the students. Through Hillel's Campus Entrepreneurs Initiative (CEI) program, in 2012-13, 308 trained student interns built relationships with uninvolved Jewish peers on 48 campuses, helping them explore and connect to Jewish life on their own terms. And since CEI's inception in 2007, 1,400+ interns across 70+ universities have formed relationships. Some students host a Shabbat dinner in their apartment, inviting disengaged Jewish students to join them with no agenda except to share in the joys of the Jewish experience. Boston University sophomore Andrew Zuckerman, for one, says that having Shabbat dinner with blessings over the candles and the wine in an off campus apartment with more than 25 students is "a much more relaxing environment" than davening at the Hillel House.

When I was looking at colleges in the late '80s, Hillel was the only Jewish club—the sole option. In 2013 it's astounding to see the diversity of Jewish clubs, another clue to the Jewish presence on campus. You can find a match not only based on your religious needs, but also on your personal interests, everything from singing to politics. Some national groups, such as AIPAC and American Jewish World Service, have a presence on many campuses; others are specific to the campus. At the University of Pennsylvania, for example, the Jewish clubs include Meor, which offers a weekly three-hour class with different speakers; Jewish Renaissance Project, which runs experimental, cutting-edge programs; and the Shabbatones, an a cappella group that performs both on and off campus. At University of Michigan there are 20 homegrown Jewish student groups-not even counting the ones Hillel spearheads.

Another question to ask is whether the university has forged positive relationships with Israeli universities-an indicator of its underlying stance with regard to the Jewish state. For example, University of California at Irvine, which has engendered considerable negative press for its Apartheid Weeks and pro-Palestinian speakers on campus, has also forged connections to four Israeli universities, "opening the door to a wide range of research collaborations, faculty and student exchanges, conferences, and workshops that deepen UCI's ties to Israel," says Lisa Armony, executive director of the Rose Project of Jewish Federation in Orange County, which works to enhance Jewish life on Orange County college campuses. "And when faculty and students have direct interaction with Israel and Israelis, it can leave a lasting imprint on how they view the country, its people, and their contributions to global society."

In addition, inquire whether the school participates in the Israel Fellows program run through Hillel and the Jewish Agency in Israel. Today, 70 North American campuses are partnering with post-Army Israelis, who help strengthen college students' relationships with Israel by bringing their own experiences, knowledge, and peer counsel directly to campus. Shai Kartus, a sophomore at Binghamton University, describes her school's Israel fellow who works in the Hillel building as a friend who "goes to coffee with students and helped me a lot in planning my semester abroad in Israel."

For some Jewish students, a key factor in choosing a college hinges on whether it has "Apartheid Weeks" and other anti-Zionist protests. Some students may not be comfortable attending a campus where these types of activities are part of the culture.

To understand the level of disturbance you can expect on each campus, be sure to ask about the prevalence of anti-Israel protests such as Apartheid Week and how the school handles them, because university codes of conduct vary in regulating such events. Many schools, for example, protect the First Amendment rights of students who participate in these events, while at the same time defending the rights of other students on campus not to have to experience anti-Israel demonstrations. In some cases, such as University of California at Irvine, these protests are relegated to a more secluded area of campus, making it unlikely that a student who does not wish to see them will pass by unintentionally. Asking these questions can help you decide for yourself whether this campus meets your personal level of tolerance for such incidents.

Explore the university's course offerings. Schools with Jewish Studies majors and minors, as well as Hebrew language and Jewish religion courses, are more likely to be places with vibrant Jewish campus life

Also, some schools go above and beyond to accommodate Jewish students' needs. For example, at Muhlenberg College, classes are cancelled for Yom Kippur and professors are understanding of students' religious commitments on other holidays.

So, if you consider Jewish life on campus an important part of a well-rounded university experience, inquire about Jewish-related happenings important to you.

The college decision is likely the biggest one you'll be making in your life to date—so make it well.

Students seeking a Judaic studies program at a private university may wish to consider the University of Southern California, where the Jerome H. Louchheim School for Judaic Studies offers classes in cooperation with the Hebrew Union College-Jewish Institute of Religion—the only such arrangement in North America. Courses cover antiquity to modernity, biblical Israel to the contemporary United States, literature to linguistics. The Hebrew program offers four semesters of language instruction.

Take advantage of Men of Reform Judaism's Reform on Campus (ROC) grants. You can apply for up to $500 for a single Reform event, such as a camp-style Shabbat and dinner, or up to $750 for a series of events, such as a cultural celebration series. For the 2012-13 academic year, the Men of Reform Judaism awarded 31 grants totaling nearly $17,500, according to Steven Portnoy, MRJ secretary and chair of the Reform on Campus Committee. For more information: facebook.com/reformoncampus.

Gary Berger is the director of Guidance at Rae Kushner Yeshiva High School and president of CAJUE, the Jewish special interest group of the National Association for College Admission Counseling.