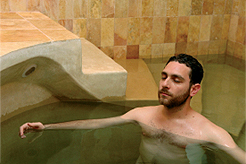 The day Jill Trapper was installed as president of Beth El Temple Center in Belmont, MA, she and her incoming executive board, along with the outgoing board, went to Mayyim Hayyim, a liberal mikveh in nearby Newton Centre. Privately, one at a time, each individual immersed three times in the ritual bath, saying blessings Beth El's rabbi had composed for the occasion.

"It was so moving; the water was so embracing," says Trapper of her first mikveh experience (after which everyone celebrated with a picnic on that warm summer afternoon). "And it made me so hopeful for my term as president."

Like kashrut (dietary laws) and Shabbat, mikveh is nowadays being reexamined by increasing numbers of Reform Jews. Long rejected by Reform Jewry as an outmoded ritual rife with sexism, this tradition is being mined-slowly, carefully-for its spiritual potential, in new as well as traditional ways.

In observant circles, mikveh is used most often as part of niddah, which requires married Jewish women to immerse monthly after menstruation; for conversion; and by brides and grooms before their wedding.

Mikveh made its first incursions back into Reform use about twenty-five years ago, when Reform clergy began bringing more converts to the mikveh, partly to reconnect with tradition in the conversion ritual and partly out of a desire to sanctify the ritual aesthetically. By 2001, the Central Conference of American Rabbis' conversion committee had issued new guidelines for Reform conversion. Along with convening a beit din (an examining body of clergy and educators) and encouraging male converts to undergo hakafat dam brit (ritual circumcision, through the taking of a symbolic drop of blood from the penis), the guidelines recommended a mikveh ceremony. "Mikveh adds an emotional, physical, and ritual element to the conversion process which many Jews by choice find meaningful," says Rabbi Steven Sirbu of Temple Emeth in Teaneck, New Jersey, who "strongly encourages" converts to immerse in the community mikveh (built on the synagogue's property by an Orthodox-controlled mikveh association with the stipulation that it remain accessible for Reform conversions).

Reform Jews are using mikvaot today in a wide variety of alternative ways: to mark lifecycle events or a change of personal status, to celebrate joy or sanctify grief. Immersions before a bat or bar mitzvah, to mark divorce or the death of a loved one, to celebrate graduation or a trip to Israel, as gratitude after recovery from a serious illness are increasingly common. And while mikveh is traditionally practiced in privacy, some liberal mikvaot are hosting groups, including women marking the onset of menopause and men taking their sons before the High Holidays.

In the early 1990s, when Temple Israel in West Bloomfield, Michigan became the first Reform synagogue to consider building a mikveh, the idea met with hostility from some in the congregation. "They considered mikveh to be sexist," Rabbi Paul Yedwab recalls. "In their minds they were dealing only with niddah." To change that perception the temple leadership held study sessions, introducing Bible texts and rabbinic commentaries on mikveh and discussing some of the new practices incorporated by liberal Jews around the country. In one such session a woman who had initially opposed the plan told the group she'd just had a double mastectomy and asked the rabbi whether she might be able to use the mikveh to mark her recovery. "I got a chill up my spine," Rabbi Yedwab recalls. This woman would become the first person he took to the mikveh when it opened in 1995. "I believe at that moment, the first true Reform mikveh was born."

In 1999, Shir Ami Bucks County Jewish Congregation in Newtown, Penn­sylvania built its own mikveh. While its primary uses are for conversions and before weddings, Rabbi Yair Robinson says that new uses are increasing. The men in his synagogue often immerse before a big trip, such as to Israel, or in the aftermath of recovery from illness. Both men and women are immersing after divorce or illness, or in the midst of a job change. And many religious school children choose to immerse before their b'nai mitzvah. When his own newborn son reaches the age of one year, Rabbi Robinson plans to take him to the mikveh to celebrate. "I treat the mikveh as a natural part of the synagogue experience, as much as Friday night services or lighting Shabbat candles," he says.

Much of the impetus for building liberal mikvaot can be attributed to the success of Mayyim Hayyim Living Waters, a nondenominational community mikveh and education center that opened outside Boston in 2004. In its first three and a half years, it hosted more than 4,500 immersions, almost 25 percent of them by men. In June 2006, Mayyim Hayyim held a national liberal mikveh conference to encourage networking and sharing of best practices. Hundreds attended. As of March 2008, twenty-three communities have since requested help in building their own mikvaot, including more than half a dozen Reform congregations in the U.S. and three in Israel. And about eighty Reform Jews attended the Reform Movement's first-ever mikveh workshop at the 2007 San Diego Biennial.

"Some women in our congregation use the mikveh monthly," says Cantor Jaime Shpall of Scottsdale, "but not in the Orthodox fashion. It's a change of status-not from impure to pure, but from the 'missed chance' to hope." Many hope that immersing in the "magic waters" will help them get pregnant. At 38, Cantor Shpall herself is immersing monthly with that in mind.

Another indicator of mikveh's new inroads is its personal use by Reform rabbis. Rabbi Sue Ann Wasserman, director of the Union's Department of Worship, Music and Religious Living, says she was taking conversion candidates to mikveh "for years," but did so herself for the first time just seven years ago before her wedding. "I came out of the water in tears," she recalls. "Everything just poured out of me. There's something unbelievable about being naked in a body of water that has such a connection to God."

Sue Fishkoff is a reporter for JTA: The Global News Service of the Jewish People.