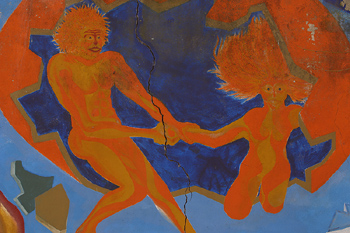 I met him on my flight back to Boston from Atlanta. He was a Muslim student from Dubai, I was a Jewish student from the United States. We had come from very different places but were on our way to the same university.

As the flight took off, we started a conversation on the Sunni and Shiite conflict. By the end of our discussion, our conclusion was that both Judaism and Islam, although different in many ways, possess an interesting characteristic in common. Although all Jews are basically of the same “tribe,” there are many divides within the community – and it is the same in the Muslim community. What we could also agree on was that these differences should not be something to fight over, but that if the two communities were more unified within themselves, it would serve to strengthen the communities as a whole.

During the Passover seder, we tell the story of the questions of the Four Sons. The wicked son, in asking his question, does not include himself in the Jewish narrative. He asks, “What does this mean to you?” instead of including himself. This story is meant to teach that we, as a Jewish people, are all part of the same narrative. We went through slavery in Egypt. We suffered in the Holocaust. We share in the celebrations, the challenges, the history of our people.

As Jewish people, we say that “we” were slaves in Egypt. If we can connect to the Jewish people who were slaves in Egypt and count ourselves among every other generation of Jews that have passed, why do so many struggle to connect with the Jewish people right in front of them? Whether Orthodox, traditional, Reform, or Conservadox, it’s so important to embrace Jews as an entire family. Those who have tried to bring us down have not handpicked their victims from various sects. The Nazis didn’t distinguish among levels of Jewish observancy.

When one Jewish person suffers, every Jewish person is experiencing that suffering. Now more than ever, when the state of Israel is threatened and every day counts in preserving the Jewish state, the Jewish people must acknowledge that that there is more strength in unity than in separation and that a Jewish person is a member of the “tribe” regardless of the sect with which they are affiliated.

Lindsey Cohen is a writer and student at Boston University from Atlanta, GA. She is the Outreach Coordinator for Boston University Students for Israel (BICA) and the President and Founder of the Boston Israel Campus Alliance (BICA). You can read her other writing at It’s Just Something to Think About.

Originally posted at It’s Just Something to Think About