At Home with Death 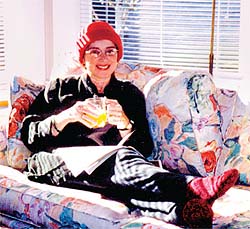 When my wife Merrily died of ovarian cancer last fall, we did something highly unusual in this age and place: we kept her body with us at home until the funeral. I am glad we did.

The custom of watching over a body is ancient, both in Jewish culture and in many others. In a Jewish mortuary setting, a paid watchman has a small room from which he may watch and pray over multiple bodies. This fulfills the letter of Jewish tradition, but falls short in so many other ways. Most significantly, it doesn't honor the power and potency of that time in the mourning process right after the death of a loved one.

We chose a different path.

During my wife's terminal illness, after a couple of pro forma rounds of chemo, she decided to forgo further treatments, which would only diminish her quality of life. Instead, she enrolled in a hospice program which offered home palliative care without medical intervention. I took a job that gave me the flexibility to work from home, and consequently spent most of my wife's final months taking care of her, assisted in her last week by our two adult daughters, and in her last days by two professional caregivers as well.

Seeing Merrily's realm of control shrink from community to house to bedroom, I agreed to have our bedroom redone to her artist's eye specifications. No hospital bed for her! She chose new bed coverings, drapes, a chandelier, and colored trim-all completed just weeks before she died.

In preparation for her death, I also contacted the local Jewish funeral home to arrange for a traditional Jewish ritual washing (tahara), with four modifications: 1. No bonnet on her head-my stylish wife would not have wanted to depart this world looking like a medieval Jewess. 2. No recitation of psalms by the women who washed her body-modern Jewish and secular poetry were more to my wife's taste. 3. Participation by a couple of my wife's closest friends in the ritual washing. 4. Merrily's body be returned to our home instead of remaining in the mortuary.

This last, vital modification turned out to be the deal breaker. Once in the possession of the funeral home, a body cannot be released until it is disposed of.

Thus we decided that my wife's body would remain at home, with us.

Merrily died in her own bed, with me by her side. Somewhat typically of dying people, she "chose" to die just after our daughters went home for the night. They returned, and we sat around the bed, talking and reminiscing as we waited for the funeral home staff to arrive.

The funeral home director had suggested I contact Rabbi Zari Weiss of Congregation Kol HaNeshamah in Seattle to arrange for a modified washing ceremony, as the congregation has its own liberal chevra kaddisha (the group responsible for the ritual washing). Notably, we belong to Kol HaNeshamah, but in my grief I had forgotten about its expertise in this area. A small group of women from the chevra kaddisha, along with Merrily's closest and most grounded Jewish friends, agreed to care for my wife's body. I, as a man, chose to follow the gender-segregating tahara tradition. Halachah, however, was used as a guide, not a rulebook.

Behind the closed door of our bedroom, six brave, compassionate women, among them the group's leader Rabbi Weiss, worked for hours to wash my beloved's body and to dress her in the burial shrouds-minus the bonnet. Meanwhile, I was surrounded by male and female friends in our living room. Together, we ate, drank, shed tears, shared words of consolation-and Merrily was there too in the midst of it all. It felt good to be cared for, just as my wife was being cared for in the other room.

The women placed Merrily in a traditional Jewish casket, a plain pine box which the funeral home had delivered, and called me in for a final goodbye. A Japanese-American friend had made some exquisite origami cranes which we laid around her. A moment of silence, a kiss, and we closed the casket.

Once the work was done and the house had emptied, my daughters and I sat around the closed casket and chatted. We even watched a DVD of my wife's favorite movie together with her! This may seem disrespectful to some, but we all felt it was what she would have wanted during her last evening with us.

In our society, we usually relegate the task of staying with the body to the funeral home. But it made no sense to me or to my daughters to see a person we loved, someone who had been part of our lives for years, taken away immediately after death, separated from us for hours and perhaps forever.

Instead, as our family performed this vigil, we came to accept the fact that my wife/their mother had died. We watched; we checked; we listened. Wishful thinking and heartfelt prayers aside, it was clear that she was really, truly dead. And we were able to linger together for hours. The night she died, I slept in our bed next to her coffin.

The next morning, the funeral home attendants returned to transport the body to the cemetery. Merrily had not left our home for weeks during her final illness; in her death she remained in our sight and in our presence; now, we escorted her out ceremonially to be buried. With family and friends to buoy us up, we went to the graveyard and sent her on her final journey from this world.