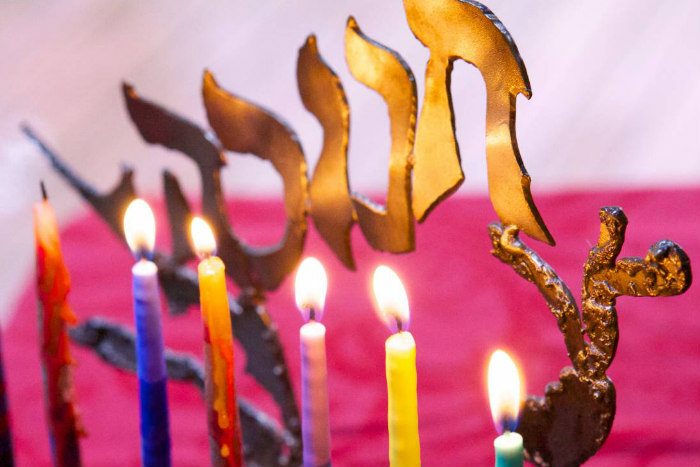 By returning to and reclaiming the Temple, the Maccabees MaccabeesמַכַּבִּיםThe family of five sons who led the revolt against the Hellenization of Jerusalem and became the heroes of the Hanukkah story. recommitted themselves to a Jewish way of life, to all that they held dear. Thus, Hanukkah prompts a rededication not only to Judaism, but also to the values at the center of the Jewish faith. In particular, Hanukkah can be a time for us to rededicate ourselves to the Jewish value of tikkun olamtikkun olamתִּקּוּן עוֹלָם"Repair of the world;" Jewish concept that it is our responsibility to partner with God to improve the world. A mystical concept of restoration of God's holiest Name to itself and the repair of a shattered world. Often refers to social action and social justice. .

The story of Hanukkah also reminds us of the precious religious liberty that was denied to the Jews under King Antiochus but is guaranteed to us. The North American Jewish experience has been different than that told in the story of Hanukkah. Thankfully, we are able to practice our faith without the threat of conversion, expulsion, revoked citizenship or imprisonment. The United States, founded by people descended from religious exiles, is rooted in the principle of religious liberty. As the Constitution’s First Amendment states,

“Congress shall make no law respecting an establishment of religion, or prohibiting the free exercise thereof.”

Those words mean that Jews have the same right to celebrate religious traditions as do Christians, Muslims, Hindus, Buddhists, and every other religious faith that makes up the rich fabric of American society, including those who choose to follow no faith tradition at all. The experience of Canadian Jews has been similarly positive, owed in part to the 1982 Charter of Rights and Freedoms, which protects freedom of conscience and religion.

Hanukkah has traditionally been a time of giving gifts and/or geltgeltכֶּסֶף"Money" (Yiddish); often given as a Hanukkah gift; used for playing dreidel.  to children. In Eastern Europe, children were dismissed from school early to enjoy their small bit of pocket money and have some time off during the holiday. This tradition of gift giving and receiving has magnified over the years. Nowadays, it is not uncommon for families to give ever larger presents each night of the holiday. This emphasis on lavish gifts is a product of our interaction with modern North American culture, a culture in which the “Holiday Shopping Season” has grown longer each year.

Just as Jews in the time of the Maccabees wrestled with the extent to which they should allow Greek culture to influence their lives, so, too, do North American Jews wrestle with the extent to which we should allow secular culture to influence our lives. This culture of commercialism undermines the true meaning of our celebration. Even many Christian leaders bemoan the loss of a meaningful Christmas that gets overshadowed by an emphasis on gifts. Hanukkah can be a time to reexamine what we consider gifts to be and how we go about giving and receiving gifts.

Ner Shel Tzedakah ("Candle of Righteousness") is a project in which families and individuals devote the sixth night of Hanukkah to learning about the problem of poverty.  They donate the value of the gifts (or the gifts themselves) that otherwise would be exchanged on that night to organizations that assist the poor, locally or globally. By making donations on the sixth night of Hanukkah, families help the Jewish candle of righteousness glow brightly for those in need. Don’t let the light go out!

A Blessing for the Sixth Night of Hanukkah

Baruch Ata Adonai, Eloheinu Melech Haolam, Asher Kidshanu B'mitzvotav, V'limdeinu L'Hadlik Ner Shel Tzedakah
Blessed are You, Eternal, our God, who makes us holy through the performance of mitzvotmitzvahמִצְוָהLiterally, “commandment." A sacred obligation. Jewish tradition says the Torah contains 613 mitzvot Mitzvot refer to both religious and ethical obligations. , and inspires us to light the Candle of Righteousness.

As we light this "Ner Shel Tzedakah" tonight, we pray that its light will shine into the dark corners of our world, bringing relief to those suffering from the indignity and pain that accompany poverty. May our act of giving inspire others to join with us in the fight against the scourge of hunger, homelessness, need and want. Together, let us raise our voices to cry out for justice, and may that clarion call burst through the night's silence and declare that change must come.

On the sixth night of Hanukkah, gather as a family to discuss ways to donate the value of Hanukkah presents received. Here are some possibilities: