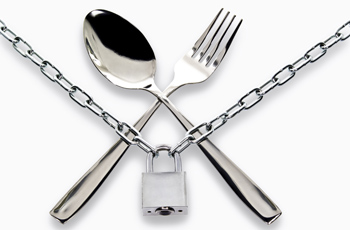 6] Aaron is to offer his own bull of purgation offering, to make expiation for himself and for his household. 7] Aaron shall take the two he-goats and let them stand before the Eternal at the entrance of the Tent of Meeting; 8] and he shall place lots upon the two goats, one marked for the Eternal and the other marked for Azazel. 9] Aaron shall bring forward the goat designated by lot for the Eternal, which he is to offer as a purgation offering; 10] while the goat designated by lot for Azazel shall be left standing alive before the Eternal, to make expiation with it and to send it off to the wilderness for Azazel.

11] Aaron shall then offer his bull of purgation offering, to make expiation for himself and his household. He shall slaughter his bull of purgation offering, 12] and he shall take a panful of glowing coals scooped from the altar before the Eternal, and two handfuls of finely ground aromatic incense, and bring this behind the curtain. 13] He shall put the incense on the fire before the Eternal, so that the cloud from the incense screens the cover that is over [the Ark of] the Pact, lest he die. 14] He shall take some of the blood of the bull and sprinkle it with his finger over the cover on the east side; and in front of the cover he shall sprinkle some of the blood with his finger seven times. 15] He shall then slaughter the people’s goat of purgation offering, bring its blood behind the curtain, and do with its blood as he has done with the blood of the bull: he shall sprinkle it over the cover and in front of the cover.

16] Thus he shall purge the Shrine of the impurity and transgression of the Israelites, whatever their sins; and he shall do the same for the Tent of Meeting, which abides with them in the midst of their impurity. 17] When he goes in to make expiation in the Shrine, nobody else shall be in the Tent of Meeting until he comes out.

When he has made expiation for himself and his household, and for the whole congregation of Israel, 18] he shall go out to the altar that is before the Eternal and purge it: he shall take some of the blood of the bull and of the goat and apply it to each of the horns of the altar; 19] and the rest of the blood he shall sprinkle on it with his finger seven times. Thus he shall purify it of the defilement of the Israelites and consecrate it.

20] When he has finished purging the Shrine, the Tent of Meeting, and the altar, the live goat shall be brought forward. 21] Aaron shall lay both his hands upon the head of the live goat and confess over it all the iniquities and transgressions of the Israelites, whatever their sins, putting them on the head of the goat; and it shall be sent off to the wilderness through a designated agent. 22] Thus the goat shall carry on it all their iniquities to an inaccessible region; and the goat shall be set free in the wilderness.

23] And Aaron shall go into the Tent of Meeting, take off the linen vestments that he put on when he entered the Shrine, and leave them there. 24] He shall bathe his body in water in the holy precinct and put on his vestments; then he shall come out and offer his burnt offering and the burnt offering of the people, making expiation for himself and for the people. 25] The fat of the purgation offering he shall turn into smoke on the altar.

26] The one who set the Azazel-goat free shall wash those clothes and bathe the body in water—and after that may reenter the camp.

27] The bull of purgation offering and the goat of purgation offering whose blood was brought in to purge the Shrine shall be taken outside the camp; and their hides, flesh, and dung shall be consumed in fire. 28] The one who burned them shall wash those clothes and bathe the body in water—and after that may re-enter the camp.

29] And this shall be to you a law for all time: In the seventh month, on the tenth day of the month, you shall practice self-denial; and you shall do no manner of work, neither the citizen nor the alien who resides among you. 30] For on this day atonement shall be made for you to purify you of all your sins; you shall be pure before the Eternal. 31] It shall be a sabbath of complete rest for you, and you shall practice self-denial; it is a law for all time. 32] The priest who has been anointed and ordained to serve as priest in place of his father shall make expiation. He shall put on the linen vestments, the sacral vestments. 33] He shall purge the innermost Shrine; he shall purge the Tent of Meeting and the altar; and he shall make expiation for the priests and for all the people of the congregation.

34] This shall be to you a law for all time: to make atonement for the Israelites for all their sins once a year.

And Moses did as the Eternal had commanded him.

17:1] The Eternal One spoke to Moses, saying: 2] Speak to Aaron and his sons and to all the Israelite people and say to them:

This is what the Eternal has commanded: 3] if anyone of the house of Israel slaughters an ox or sheep or goat in the camp, or does so outside the camp, 4] and does not bring it to the entrance of the Tent of Meeting to present it as an offering to the Eternal, before the Eternal’s Tabernacle, bloodguilt shall be imputed to that party: having shed blood, that person shall be cut off from among this people. 5] This is in order that the Israelites may bring the sacrifices which they have been making in the open—that they may bring them before the Eternal, to the priest, at the entrance of the Tent of Meeting, and offer them as sacrifices of well-being to the Eternal; 6] that the priest may dash the blood against the altar of the Eternal at the entrance of the Tent of Meeting, and turn the fat into smoke as a pleasing odor to the Eternal; 7] and that they may offer their sacrifices no more to the goat-demons after whom they stray. This shall be to them a law for all time, throughout the ages.

8] Say to them further: If anyone of the house of Israel or of the strangers who reside among them offers a burnt offering or a sacrifice, 9] and does not bring it to the entrance of the Tent of Meeting to offer it to the Eternal, that person shall be cut off from this people.

10] And if anyone of the house of Israel or of the strangers who reside among them partakes of any blood, I will set My face against the person who partakes of the blood; I will cut that person off from among kin. 11] For the life of the flesh is in the blood, and I have assigned it to you for making expiation for your lives upon the altar; it is the blood, as life, that effects expiation. 12] Therefore I say to the Israelite people: No person among you shall partake of blood, nor shall the stranger who resides among you partake of blood.

13] And if any Israelite or any stranger who resides among them hunts down an animal or a bird that may be eaten, that person shall pour out its blood and cover it with earth. 14] For the life of all flesh—its blood is its life. Therefore I say to the Israelite people: You shall not partake of the blood of any flesh, for the life of all flesh is its blood. Anyone who partakes of it shall be cut off.

15] Any person, whether citizen or stranger, who eats what has died or has been torn by beasts shall wash those clothes, bathe in water, remain impure until evening—and shall then be pure. 16] But if the clothes are not washed and the body is not bathed, that person shall bear the guilt.

18:1] The Eternal One spoke to Moses, saying: 2] Speak to the Israelite people and say to them:

5] You shall keep My laws and My rules, by the pursuit of which human beings shall live: I am the Eternal.

6] None of you men shall come near anyone of his own flesh to uncover nakedness: I am the Eternal.

9] The nakedness of your sister—your father’s daughter or your mother’s, whether born into the household or outside—do not uncover their nakedness.

14] Do not uncover the nakedness of your father’s brother: do not approach his wife; she is your aunt.

15] Do not uncover the nakedness of your daughter-in-law: she is your son’s wife; you shall not uncover her nakedness.

17] Do not uncover the nakedness of a woman and her daughter; nor shall you marry her son’s daughter or her daughter’s daughter and uncover her nakedness: they are kindred; it is depravity.

18] Do not marry a woman as a rival to her sister and uncover her nakedness in the other’s lifetime.

19] Do not come near a woman during her menstrual period of impurity to uncover her nakedness.

20] Do not have carnal relations with your neighbor’s wife and defile yourself with her.

21] Do not allow any of your offspring to be offered up to Molech, and do not profane the name of your God: I am the Eternal.

22] Do not lie with a male as one lies with a woman; it is an abhorrence.

23] Do not have carnal relations with any beast and defile yourself thereby. Likewise for a woman: she shall not lend herself to a beast to mate with it; it is perversion.

24] Do not defile yourselves in any of those ways, for it is by such that the nations that I am casting out before you defiled themselves. 25] Thus the land became defiled; and I called it to account for its iniquity, and the land spewed out its inhabitants. 26] But you must keep My laws and My rules, and you must not do any of those abhorrent things, neither the citizen nor the stranger who resides among you; 27] for all those abhorrent things were done by the people who were in the land before you, and the land became defiled. 28] So let not the land spew you out for defiling it, as it spewed out the nation that came before you. 29] All who do any of those abhorrent things—such persons shall be cut off from their people. 30] You shall keep My charge not to engage in any of the abhorrent practices that were carried on before you, and you shall not defile yourselves through them: I the Eternal am your God.