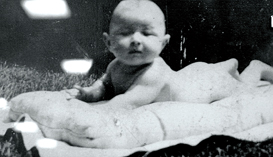 Childhood memories are vague at the best of times. Our remembrances tend to be pictures shown and stories told to us by others. But what happens when a family chooses not to remember because the memories are too painful or too shameful?

I grew up as "an only child," but not the only child. There had been two other children-Helena, three years older, and Edwin, two years younger-but my parents never spoke of them. I did not know how they died, only that it had happened when I was very young and there was an unspoken understanding that I was forbidden to talk or ask any questions about them.

My mother took me at age three to visit my sister in a hospital. She instructed me to remain in the playground and keep my eyes on a particular third-floor window. Soon my sister's face appeared. Helena smiled and waved at me, and I waved back. This last glimpse of Helena is my only memory of her, a hazy memory at best.

For some time my father was also in a hospital. When he was discharged, he did not come to live with us, as my mother feared he might still have "germs." Several years later, he did move into our apartment, but slept in his own bedroom and ate from separate dishes and cutlery kept in a special cupboard.

My mother was forever worrying that I might catch germs. I was not allowed to share drinks or food with anyone; borrow books from the library or trade comics with a neighbor's child; sleep over at a friend's; or go to camp-all because of germs. I didn't question the restrictions. It was simply the way it was.

Eventually, my parents purchased a small house in the Toronto suburbs. They stored all of our family photos in a chest in the basement. Often I sifted through pictures, among them images of my brother and sister. But in 1954, during Hurricane Hazel, our house was flooded and all the photos destroyed. The only tangible records of my siblings were obliterated.

In high school I developed a strong sense of independence. At age 20 I married Peter. By the time I turned 29, we had three daughters: Robin, Jodi, and Ashley. I so wanted to be able to name them in memory of my brother and my sister, but I felt afraid. Helena and Edwin's deaths were still too much of a mystery.

My father died in 1975 at the age of 66. Twenty years later, I became the sole caretaker of my mother during the last year of her life. The weight of responsibility for her care became almost more than I could bear, and a longing arose in me for the siblings who might have shared the burden with me. I asked members of my extended family-aunts, uncles, cousins-to tell me about Helena and Edwin. My questions were met mostly with blank stares, as if my sister and brother had never existed. Finally, an older cousin shared a memory of his parents whispering about the terrible tragedy that had befallen my family. He confided that he too was raised to be afraid of germs, never being allowed to share food, play sports, or sleep at friends' houses.

Not until 1995 did I learn when Helena and Edwin had died. At my request, the owner of a Jewish funeral home in Toronto searched through the microfiche reader to find their dates of death and place of burial. Excited, I drove out to the cemetery and presented the information to the office attendant. After a brief search, he explained apologetically that burial records from those years had been destroyed in a fire. He could only point me to the section of unmarked graves where they had to have been buried-the section set aside for poor members of the Jewish community who, like us, could not afford to pay for burial plots.

It wasn't until 1996, when I packed up my mother's apartment after she died, that I found the answers I had yearned for all my life. In a drawer was a journal entry my 70-year-old mother had written for a Psychology course at York University titled "The Worst Time of My Life." She wrote, in part: "I was married in 1936 and six and a half years later, I had two daughters and an infant son. My husband developed tuberculosis, a fatal lung disease, and was hospitalized for five years. During the first few months of his hospitalization, my oldest daughter, not quite 5 years old, was also diagnosed with TB…which she had contracted from my husband. This beautiful, intelligent child was hospitalized for several months and then passed away. I can still hear her cry, 'Mommy, why can't I go home with you?' At almost the same time, my infant son developed the fatal disease as well and passed away three months later." In that same drawer were two water-damaged photographs-one of a bright-eyed, chubby-faced little girl and one of an infant lying naked on a blanket in the sun.

Now I knew why I had been so protected as a child, and why my parents had never talked about my brother and my sister. My parents couldn't face the terrible shanda of tuberculosis, a highly contagious disease for which there was no cure. If you had TB, people feared and avoided you. My mother and father were frightened of being shunned by everyone.

It was only after her death that my mother could "talk" to me about Helena, Edwin, and the ordeal she had lived through.

For years I continued the family tradition of keeping our family story hidden, except from my husband and daughters. While TB was no longer a health threat in North America, in my mind it remained the unmentionable shanda of my childhood conditioning-a secret never to be discussed with anyone.

Finally, in 2009 I experienced some comfort and closure. My daughter Jodi and son-in-law Jack funded the creation and installation of a 14-foot-tall menorah at the entrance of their synagogue outside Toronto. It is inscribed: "In memory of Helena and Edwin Lipson." My sister and brother now had a lasting memorial to their brief lives-a resting place for their neshamas (souls).

That Chanukah, the congregation arranged for a formal dedication of the Lipson Menorah, and Jodi and Jack decided to host a dinner afterwards. Initially, I was reluctant to invite my friends. None of them knew about the shanda I had kept hidden throughout my life. But with Jodi's encouragement, I agreed to invite several old friends who had known me since childhood as well as a number of couples from our temple.

At the dinner I stood before everyone and told my story. They were stunned-and then embraced me with tears and love and understanding. At that moment I realized that revealing the truth to my friends had set me free. The dedication became my liberation.

Still, the specter of shame reemerged as I began to write this story for RJ magazine. Sharing the shanda of tuberculosis with friends had been difficult enough; could I risk exposing my secret publicly? And yet, I realized: This is an important opportunity to help others open their locked doors of shame.

I now believe that everything in life happens for a reason. Only when we find the courage to push beyond fear and shame can we discover its purpose. Composing these words, like seeing the lit candles on the Lipson Menorah, is an affirmation: shandas are not forever.

Marlene Myerson, a member of Temple Emanu-El in Toronto, served as a Curriculum Consultant for URJ Books and Music.