Carnatzlach (or karnatzlack) are delicious meatballs that look like little sausages without any casing.  They are kebabs when tightly squeezed onto a skewer. Carnat means fresh sausage in Romanian (probably from the Spanish “carne” meaning meat), and “lach” at the end of the word is the Yiddish word for little.

In 1492, when the Jews were expelled from Spain, the Sultan in Turkey invited them to come live in peace in his large Ottoman Empire.  Romania was a part of this empire for over 300 years.  The Sephardim brought their love for ground meat dishes and the Ottoman use of spices and grilling meats to Romania and Romanian Jews making aliyah to Israel have had an impact on the cuisine there as well. 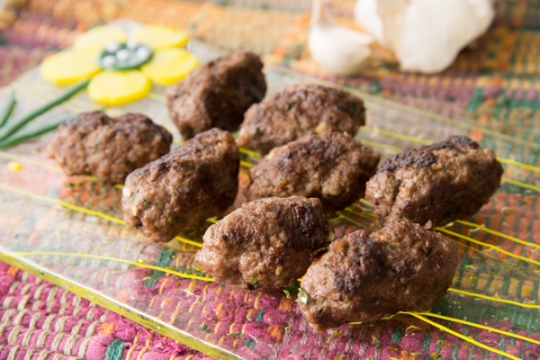