What excites tourists about Cape Town?

Its beauty and grandeur. The 16th-century explorer Sir Francis Drake declared Cape Town, situated in the Western Cape of South Africa, “the fairest we saw in the whole circumference of the earth!” Today the cosmopolitan, vibrant city, situated amidst the sea, valley, and mountaintops, is considered among the most breathtaking spots on the planet.

What sightseeing is a must?

Table Mountain is a huge, flat-topped block of sandstone; after ascending the summit by cable car, you can take in magnificent panoramic views and stroll around on a wheelchair-friendly boardwalk. For excellent views of the city and harbor, visit Signal Hill, the northernmost tip of the terrestrial area of the park, where the noon-day gun marks 12:00 in Cape Town.

Set against Table Mountain’s eastern slopes is Kirstenbosch National Botanical Garden, one of the great gardens of the world and the first to be devoted to a country’s indigenous flora. You’ll find more than 7,000 species, many of them rare or threatened. Summer sunset concerts at the garden are a relaxing way to spend Sundays from November to April. Pack a food basket and enjoy picnicking on the soft grass that slopes downwards towards the stage.

Just an hour’s drive from Cape Town, at the southwestern tip of Africa, is Cape of Good Hope Nature Reserve, where you can see zebra and eland (large, spiral-horned African antelopes) and hike or bike the scenic trails. About 10 miles north is the Boulders Penguin Colony in Simon’s Town, home to a unique, endangered, land-based colony of African penguins.

If you visit between August and November (Winter/Spring), you can go whale-watching. Each year at this time, Southern Right whales and other species migrate into the Southern coastal waters by the quaint seaside village of Hermanus to calve and nurse their young.

To experience a facet of Cape Town revealed to few tourists, consider exploring the townships with the help of a tourist guide, who can arrange insightful, fun-filled ways to experience the informal settlements while keeping safety paramount. By meeting and speaking with local people, tourists come to appreciate the townships’ vibrant culture and gain insight into challenges faced by the majority of South Africans. A visit to the District 6 museum facilitates understanding of how earlier classification laws had fragmented our society until about the last 20 years. During the dark years of apartheid, many people whom tourists assume were defined as black were in fact classified as Coloured or Indian and did not live in the townships, but in other designated areas, For example, Bo-Kaap, the oldest part of Cape Town, is largely comprised of a community of descendants of Malaysian/Indian slaves from Southeast Asia brought here in the 17th century by the Dutch East India Company to work the provision station that supplied ships bound for Malaysia. Notably, their descendants have maintained their unique culture, traditions, and recipes. Their Cape Malay cuisine is a careful blend of spices, turmeric being most important; and their homes are brightly colored. To learn more, visit the beautiful Bo-Kaap Museum.

Are there safaris in the area?

Yes, there are three game reserves within a two- to three-hour drive. You’ll travel in an open four-by-four vehicle, with a ranger, through the bio-diverse natural habitats of elephants, lions, buffalo, giraffes, zebra, rhinos, ostriches, baboons, springboks, blesboks, wildebeest, and other animals.

Yes, wine farms are studded all over the Cape, and some are within a 40 minutes’ drive from Cape Town. Food and lifestyle blogger Tandy Sinclair suggests wine tasting at Vergenoegd Wine Estate, followed by lunch at 96 Winery Road (skip the coffee, but don’t miss the crème brûlée). You can sip freshly brewed coffee at the nearby Lourensford Wine Estate, which is also a coffee roasting company, and then enjoy chocolates and wine in the wine tasting center.

About five miles down the road, stop in at Spier Wine Farm, dating back to 1692, where award-winning wines are paired with fabulous food grown on the farm or locally. Music and market events enhance the experience.

One of the best wine experiences in the Cape is at Die Bergkelder, the famous “Cellar in the Mountain,” home to award-winning Fleur du Cap wines, wine tasting, and an audio-visual presentation about the winery.

Can you share some of Cape Town’s culinary delights?

South Africa is well known for its exceptional meat cuts, and Chef Giorgio Nava serves up the real deal at Carne SA, one of the best steakhouses in the country. Local venison, ostrich, and kudu are often featured on the menu.

One of Cape Town’s most sought-after venues is Sevruga, on the Victoria & Alfred Waterfront. Its extensive menu features world-class sushi and seafood and a temperature-controlled glass wine wall housing 3,000 bottles of South Africa’s finest wines.

I also recommend a visit to The Pot Luck Club, a tapas-style restaurant owned by Chef Luke Dale-Roberts, who has won the Eat Out Top Restaurant Award. He also runs The Test Kitchen, a fine-dining eatery popular with young South Africans. The team in the open-plan kitchen move fast in their chefs’ whites, prepping and cooking for everyone to see. Dining alone here is easy—there’s plenty of entertainment.

Dress is almost universally informal. Be cautious about walking in isolated areas at night. Tipping for service often starts at 10% of a bill.

South Africans drive on the left, so the vehicles are all right-hand drive. The Cape Town roads are excellent, and we have a very good rapid bus transit system, but you may need taxis, as buses don’t run to all areas. Only use metered taxis.

In the heart of Cape Town you’ll find a thriving Jewish center which includes the South African Jewish Museum and the Cape Town Holocaust Centre. At the museum you can delve into how South African Jews responded to the moral and political issues confronting them, and visit the nation’s first synagogue, an Egyptian-styled building built in 1863 that now houses rare Jewish artifacts of the period. The Holocaust Centre explores Cape Town survivor stories, the pseudo-science of “race,” anti-Semitism, and the institutionalized racism of apartheid.

How long have Jews lived in Cape Town?

About three Jewish families, and a handful of individual Jews, first came to Cape Town in 1820 as part of a larger group of British settlers. Seventeen Jews founded the first congregation in South Africa, the Gardens Shul, 21 years later.

Some of the early Jewish settlers were commercial pioneers. The Mosenthal brothers—Julius, Adolph, and James—traveled to Asia and returned in 1856 with 30 Angora goats, thereby becoming the originators of the mohair industry in South Africa. Aaron and Daniel de Pass, the largest ship owners in Cape Town, were leaders in the fishing industry. Jews were also among the first in South Africa to farm ostrich, and were players in the early diamond industry.

What role did Jews play during the apartheid struggle?

A significant number of Jewish South Africans, both individuals and organizations, helped support the anti-apartheid movement. Many opposed the National Party’s apartheid policies, and the Union of Jewish Women sought to alleviate the suffering of blacks through charitable self-help projects. Five of the 17 African National Congress members who were arrested for anti-apartheid activities in 1963 were Jewish. Anti-apartheid movement leader Nelson Mandela wrote: “I have found Jews to be more broadminded than most whites on issues of race and politics, perhaps because they themselves have historically been victims of prejudice.” Today South Africa is a true rainbow nation where all religions and cultures thrive freely.

Yes. Thirteen Jewish mayors have served Cape Town, from Hyman Lieberman (1904–1907) to, most recently, Patricia Sulcas Kreiner (1993–1995). Jews representing different political parties have also been elected onto town councils and served as mayors and members of the Provincial Administration and Parliament. The Jewish Board of Deputies–Cape Council, 30% of whose members are affiliated with the Cape Town Progressive Jewish movement, keeps watch on proposed legislation that could affect South African Jewry.

What is the Progressive Jewish community like in Cape Town today?

The city has three Progressive (Reform) synagogues, in Wynberg, Green Point, and West Coast, all of which are under the umbrella of the Cape Town Progressive Jewish Congregation, also known as Temple Israel. They hold services in Hebrew and English, using Mishkan T’filah—World Union Edition, on Friday nights, and shiurim (study sessions) before the Shabbat service on Saturday mornings. Wynberg and Green Point feature a monthly “Shabbat Magic”; we call it magic because the shuls are full to the brim with congregants of all ages. Wynberg also hosts Shabbat Chessed, an inclusive, participatory, lay-led, alternative Shabbat experience. And, one Shabbat morning every quarter, all three communities join for a “Super Shabbat” or “Unity Shabbat.” The day begins with seven speakers, each presenting a seven-minute talk on a Jewish topic of their choice, followed by alternative concurrent services—traditional, family-friendly, yoga, or creative Torah telling—a joint Torah service, and then a festive meal.

From my experience as a tour operator, I can say that Cape Town regularly exceeds the expectations of even the best-travelled tourists. Come visit us. You’ll enjoy our natural beauty, diverse cultures, and warm hospitality. 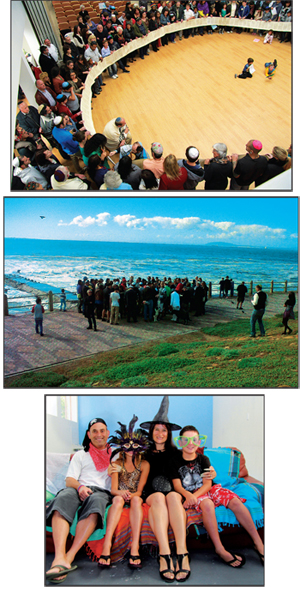