No, I Did Not Convert Because My Husband is Jewish!

So yes, it does happen that people convert for reasons other than to marry a Jew. Out of all the Jews I know personally who converted or are in the process of doing so, I don't think any converted only because they were engaged to someone Jewish. Now I would include in this group people like myself who came to Judaism because they were involved with Jewish partners.

This is simply the way I was introduced to Judaism and the start of my involvement. When my husband and I were married, we intended to have an interfaith home. Our ketubah (marriage contract), which we both really love and feel as though someone wrote just for us, is an interfaith ketubah.

My not being Jewish was never an issue to my husband or his family and he never thought it would be better or even nice if I converted. He did want his children to be raised with Judaism. In my attempt to be his partner in that process, I started to learn more and more about Judaism and felt drawn to it. I began and completed the conversion process after we were married because, inside, I felt Jewish. Until we announced the date of my bet din (a panel of three rabbis for conversion) and mikvah (immersion in a ritual bath), his family had no idea that I was even contemplating conversion. And I didn't really share this experience with anyone, even friends, because it was part of a very personal journey.

My husband attended an Introduction to Judaism class with me to be supportive. He took his childhood Jewish education very seriously, was a religious studies major in college and had considered entering the rabbinate. He was taking the course so that he could share my journey. He also attended all the meetings I had with my sponsoring rabbi. I waffled on this. Part of me felt that it was more important for me to go alone because I felt that this should be part of my own spiritual journey.

I had the same concern about whether my husband should sit with me when I met with the bet din. I finally decided yes, because in reality even though this was a personal decision and personal journey, we were also in it together. I wanted our learning together about Judaism to continue so that it would be a family activity that would continue.

It is probably true that I would never have come to Judaism if not for my Jewish partner. His commitment to his heritage was inspirational and our journey together as a Jewish family is a driving force in my life. My husband loves his Judaism and always has.

I remember attending Yom Kippur services with him and his family after we'd only been dating for four months. He was basically an uninvolved Jew at the time I met him, so this was the first time I saw how important Judaism really was for him. I found his respect for his heritage profound and, for me, one of the most important things about him. I wanted to support him by having a Jewish home and children, even though, at that point, I had no intentions of converting.

My husband's love for Judaism has always been a source of immense inspiration for me on my own journey.

So yes, my becoming Jewish is tied to my partner's being Jewish, but I certainly don't feel that I became Jewish in order to marry a Jew. Many converts that I have come to know in our community feel the same way. Some, like me, originally joined our congregation as an interfaith family. Some are not involved in any way with a Jewish partner. Because our synagogue is very open and welcoming, there was never any pressure or need for me to convert.

Of those who took our Introduction to Judaism class (via the Union for Reform Judaism) and were planning on converting, no one converted for the sole purpose of marrying a Jew (except for one woman, whose Jewish fiancé did not attend the class and who ended up dropping out). About half of the people were attending because their partner was Jewish and they just wanted to learn more about Judaism-they had no intention of converting. That's one of the reasons I like the Jewish community that I belong to - people come to Judaism, both by birth and by choice, simply because they love it and it's who they are.

I do know that when I was making the final commitment to formalize and complete my conversion, one of the questions I asked myself was if, God forbid, my husband and I were to separate or divorce, would I continue with the process? It was not an easy question and I'm not sure how I resolved it.

Now that I'm Jewish, the question is moot. Even if we weren't together, I wouldn't change my identity. I'm forever Jewish.

An update: Ironically, my ending thought, as tragic as it sounded when I wrote this article more than 10 years ago, has unfortunately occurred. My partner and I are in the process of concluding, what is now going into its four year, our divorce. At no point, in this entire time since I transitioned into Judaism, has my Judaism come into question by me or anyone else I know.

Whether I would continue to remain Jewish was never even a thought, and I can't imagine it being a thought. It's so much a part of who I am that I don't know how I could conceivably change it at this point. 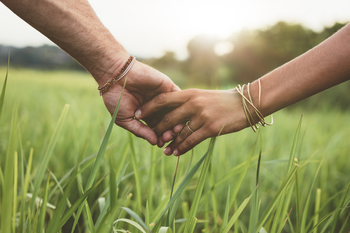