Defending the State of Israel, One Kiddush at a Time 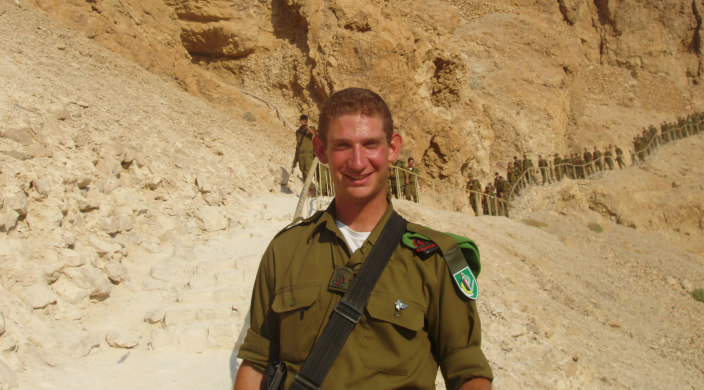 Even after two months of Basic Training as a volunteer in the Israel Defense Forces, I still tried to shrink behind someone else whenever the Mempay (Company Commander) asked us a question. Basic Training was not an environment in which volunteering for anything beyond showing up was advisable. Six days of every week were packed with stressful discipline, demoralizing surprises, and chaotic uncertainty, and even with the support of my fellow volunteers, Hebrew comprehension and homesickness were a daily struggle.

But this evening was Shabbat, and Shabbat during Basic Training was like the Era of Good Feelings for 25 hours. On the seventh day, our only obligation was to attend Shabbat dinner with our commanders—as casual an experience as Basic Training allowed, but everyone was still eager for it to end as quickly as possible, so we could move on to more important business, like sleep and soccer. It couldn’t end, though, until it had begun with Kiddush, and on this evening the one religious soldier who usually led that prayer was away on leave.

I had learned to sing the standard, Louis Lewandowski melody for Kiddush from my father by the time I was six—an early sign that perhaps my future lay in the cantorate, and not in playing second base for the New York Yankees. I didn’t think twice about volunteering because it seemed about as noteworthy as leading everyone in “Happy Birthday.”

“Ani y’chola la’asot et zeh (I can do it)!” I eagerly offered, trying to sound credible in Hebrew but muddling the grammar and mistakenly identifying myself as a girl. When the laughter at my latest linguistic misstep had died down, the Mempay, short on options, gave me the okay to proceed.

“Baruch ata Adonai (Blessed are You, Adonai)…” I expected everyone to join me, like we do in Reform synagogues on Friday nights, but they just listened in silence. Most Israelis, as it turned out, simply mumble the Kiddush, more as a pro forma recitation than a work of art. They had never realized it could be music. And on that evening, far from my friends and family back home, I hadn’t realized how desperately I needed it to be music, to rebalance my sense of purpose and identity, until I started to sing.

I sang of my grandparents from Poland who died before I was born but who, my dad told me, had loved the same Jewish melodies that I did. I sang of my parents, who strove to educate me about everything Jewish except the State of Israel for fear I would one day make aliyah (move to Israel to live permanently). I sang of the Jewish identity that had somehow, inexplicably, propelled me away from my comfortable life in Manhattan to the Negev Desert, to defend a country in which I never intended to live.

As the Israelis listened to that Lewandowski rendition, they looked like Julia Roberts’ character in “Pretty Woman,” discovering “La Traviata” for the very first time. There was a moment of silence after I finished, and then they burst into applause. It was a heady feeling. I had spent my entire time in the service comparing myself to soldiers who were bigger, faster and stronger than I was. For the first time, I finally felt I had contributed something meaningful to the IDF beyond my unintentionally amusing grammar.

Fortunately, my fellow volunteers put the whole experience in perspective: “Matim l’David pakal Kiddush, nachon (David’s MOS can be ‘Platoon Kiddush Specialist,’ right)?” they joked with the Israelis. A senior officer came over to our table and shook my hand, offering some commendation in Hebrew I couldn’t understand. “He said you did a good job,” a particularly tone-deaf Israeli assured me, smiling, “but you know what? I led Kiddush one Shabbat when you weren’t here, and he said the same thing to me!”

Jewish tradition strives to teach us, from stories as ancient as Moses and the burning bush down through the ages, that meaning and inspiration often are found in places that are unexpected, overlooked, or seemingly mundane. It’s not as easy to remember as it sounds, though. As a cantor, I never expect a simple rendition of Nurit Hirsch’s “Oseh Shalom” or Debbie Friedman’s “Mi Shebeirach” at a bedside or a shiva minyan to have as powerful an effect as it always does. The Mempay invited me to lead Kiddush every Friday night for the rest of the year. It didn’t do much to improve my grammar, but even the most secular Israelis found themselves singing along in the end. 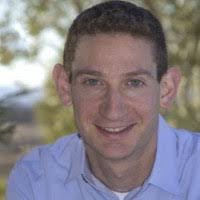 Cantor David Frommer serves Sherith Israel in San Francisco, CA. After college, he volunteered as a combat soldier in the Israel Defense Forces, where he served with distinction in the West Bank. He was ordained by Hebrew Union College-Jewish Institute of Religion's Debbie Friedman School of Sacred Music in New York and also trained as a chaplain at the U.S. Army Chaplain Center and School at Fort Jackson, South Carolina. The first cantor to serve as a chaplain in the U.S. military, Cantor Frommer provided religious support for Jewish soldiers and civilians in Afghanistan, Kuwait, Jordan, and Qatar. He currently serves the soldiers of the California Army National Guard.