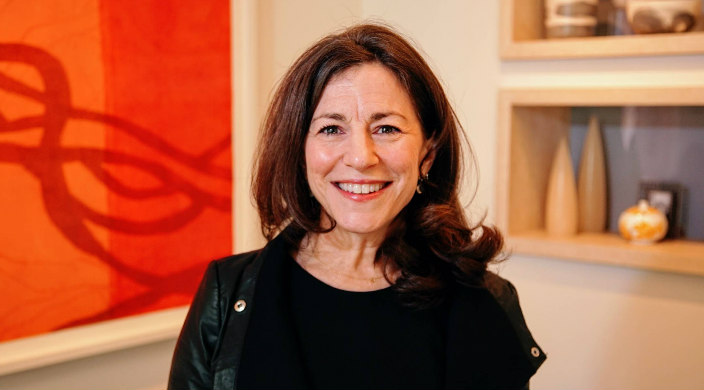 Rabbi Carole B. Balin, Ph.D. is the first woman to earn tenure at her alma mater, Hebrew Union College-Jewish Institute of Religion’s New York rabbinical school, where she is professor emerita of History. Rabbi Balin is the chair of the board of the Jewish Women's Archive and lectures and publishes widely on gender and the Jewish experience, including the volume she co-edited, Sisterhood: A Centennial of Women of Reform Judaism.

To honor the uncounted women in the Book of Numbers and to celebrate the 100th anniversary of women’s suffrage in the U.S. this year, she has crafted an “alternative Book of Numbers” for her weekly Torah commentaries for our Ten Minutes of Torah initiative.

In each weekly chapter, Rabbi Balin highlights the efforts of a Jewish woman of the past involved in the suffrage movement. We caught up (remotely) with Rabbi Balin to talk about her influencers and her lifelong commitment to Jewish women’s empowerment. To hear more from her, subscribe to the Monday edition of Ten Minutes of Torah for Torah commentaries delivered to your inbox at the start of each week.

ReformJudaism.org: Who are your early Jewish influencers and mentors?

Rabbi Balin: The first is my 96-year-old rabbi, Harry A. Roth, who named me, officiated at my bat mitzvah and wedding, attended my ordination, and b’nei mitzvah ceremonies of my children. I continue to see him regularly and am inspired by his commitment to the principles of Reform Judaism.

The second influencer is Debbie Kerdeman, who was our regional advisor for NFTY – The Reform Jewish Youth Movement. She helped me understand that study was an essential part of the ritual of being a Jew. Because of Debbie, I became very involved in Reform youth activities, and she probably had a lot to do with my eventually becoming a rabbi.

Your writings, including To Reveal Our Hearts: Jewish Women Writers in Tsarist Russia, often portray Jewish women who have made significant contributions to religion, culture, and politics. How far back does your fascination with female biographies go?

I was always drawn to strong female protagonists, like the fictional Anne of Green Gables. The book’s author, L.M. Montgomery, was like a rock star to me when I was young. I actually made a pilgrimage to the Green Gables home on Prince Edward Island with my husband several years ago, and it really felt like a rite of passage.

In your commentary on the opening chapter of the Book of Numbers, you point out that Biblical women are mostly nameless and not counted at all in the census report. Why, as you put it, is being counted “no trivial matter?”

History matters to our people. It is embedded in our rituals and observances, the Pesach seder being the most obvious example. When you don’t see people like you in the stories of the past, it’s easy to feel left out and even alienated from our heritage.

I want all Jews to feel included in every aspect of Jewish life and feel license to observe the whole plethora of rituals, rites, and milestones. If you can see it, you can be it, they say. Finding yourself in the Biblical narrative allows you to make meaning out of the stories and then hand them down to future generations.

Did Reform Jewish women play a significant part in the struggle for passage of the 19th Amendment to the Constitution, granting women the right to vote?

They did, and I profile some of them in my commentaries, beginning with Pauline Perlmutter Steinem, grandmother of feminist icon Gloria Steinem.

Pauline was an immigrant from Poland who had received teacher training in Bavaria. She and her American husband moved to Toledo, OH, where they had four sons. The youngest, Leo, was Gloria Steinem's father.

Like other middle-class women of her generation, Pauline moved beyond the domestic sphere and became engaged in social issues outside her home. In addition to serving as the president of the Ohio Women’s Suffrage League, Pauline served as sisterhood president of her Reform congregation, Temple Shomer Emunim.

When people asserted that women could not succeed in certain fields, Pauline replied, “No man knows what woman would do, if she were free to develop the powers latent within her, nor does she herself know as yet.”

What led you to compare Anita Pollitzer, a second-generation Reform Jewish suffragist to Joshua, who led the Israelite tribes in the conquest of Canaan?

I was pointing to the fact that changing someone’s mindset doesn’t happen quickly. It took the Israelites 40 years – a generation – to move from the perspective of slavery to freedom. The 19th Amendment was also stranded for 40 years, in Congress.

First proposed in 1878, it would take until 1919 for it to pass the House and Senate – and even then, its fate was in doubt, as it required 36 states for ratification. Anita Pollitzer was among the suffragists who led her generation to victory in the struggle for voting rights.

Would you agree that the fact that Anita Pollitzer was a Reform Jewish woman gave her agency as a change agent?

Yes. Reform Judaism played an important role in Anita’s understanding of women’s liberation. She was born in Charleston, S.C., which was also the birthplace of Reform Judaism in the U.S.

She was very proud of the fact that she taught religious school at Kahal Kadosh Beth Elohim in her hometown and felt inspired by the Reform Movement’s promise to consider women equal to men in all religious aspects. And she used that impulse as motivation for bringing change to women in many fields.

She wound up going to art school in New York City and befriended Georgia O'Keeffe, whose paintings she introduced to the photographer Alfred Stieglitz; that introduction led to O’Keeffe’s rise to fame.

Why do you think the study of female models from the past is so important?

They do more than fill out the historical record. As Gloria Steinem put it, “Each other's lives are our best textbooks.”

I want people of all ages to feel engaged with classical Jewish texts. I hope readers will find a way to connect themselves to the Biblical narrative, even to the stories that have been hidden under layers of male-storytelling.

In the year 2020, we have the right, and I would say the obligation, to bring these stories to the fore and to read ourselves into the text. And that is exactly what I was trying to do in these commentaries.

END_OF_DOCUMENT_TOKEN_TO_BE_REPLACED

Some of the best stories from our tradition involve a question presented on one level that is answered on a completely different and surprising level.
Gender-based Violence
Image

October is Domestic Violence Awareness Month (DVAM) in the U.S. This year, the National Network to End Domestic Violence (NNEDV) chose the theme of #Every1KnowsSome1 to highlight how common domestic violence is. Each of us may (or likely) knows someone, either in our Jewish community or our secular communities, who has been impacted by or is a survivor of domestic violence.
Torah Study
Image