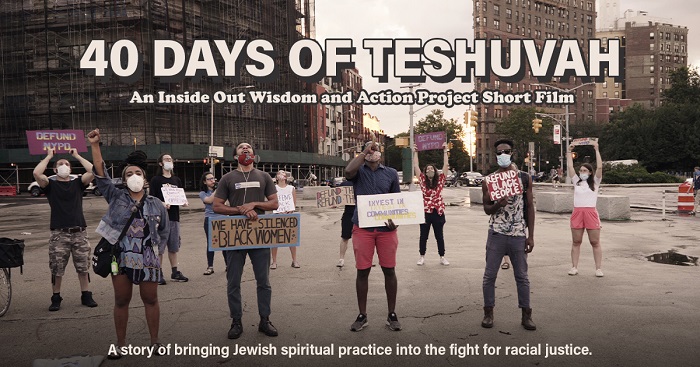 Yehudah Webster is passionate about ensuring the Jewish community’s commitment to the fight for racial justice and collective liberation. With an analysis of revolutionary-balanced care, Yehudah has worked as an anti-oppression trainer and organizational consultant, developing unique programs to bring together communities that are often pitted against each other. As a community organizer for Jews for Racial & Economic Justice (JFREJ), he supports the organization’s police accountability and transformative justice campaigns through grassroots efforts that include lobbying for legislative reform. During the 2020 uprising for Black lives, Yehudah was the lead organizer of the 40 Days of Teshuvah action that created a space of mourning the destruction of Black communities and crying out to the Heavens for spiritual co-conspiratorship in the fight for racial justice. I sat down with Yehudah to talk about his spiritually-inspired struggle for social justice and the short film, “40 Days of Teshuvah” Film Trailer of which he is a central character.

ReformJudaism.org: What was the impetus for your “40 Days of Teshuvah” protest action in advance of Tishah B’av?

Yehuda Webster: The impetus was feeling deep pain, rage, and grief after the murder of George Floyd and that incident in Central Park, when Amy Cooper called and lied to the police about a disagreement she was having with Kristen Cooper, a Black birdwatcher. After all these decades of organizing, protesting, and lobbying, are we still not more valued than a dog? I remember going outside feeling overwhelmed with emotion, sending up a prayer to Hashem, and crying out: “What are we supposed to do? It’s been 400 years. How are we going to achieve liberation?”

I started to think, if we haven't been able to make lasting change in this country, perhaps our own devices are not enough. Maybe we need a spiritual co-conspiratorship. That pushed me to do more Torah study with my family and to turn to Hashem for direction and inspiration. That moment of mourning, when I actually let myself feel, was an opening that I hadn’t let myself access in the past. It was a softening to let myself be able to be receptive to the wisdom of our ancestors, of Torah.

How did you find the inner strength and commitment to get out there every day for 40 days, rain or shine, even with few other protestors at the beginning, despite self-doubt, in the face of hecklers?

What kept me going were my relationships with Hashem and with community. Having both of those elements at my back, allowed me to get out there day after day. Part of the work was to create a space where, for 40 days, people could access the rage and grief that they were feeling in their bodies and cry out to Hashem. I wasn't going to let hecklers disrupt us.

Why were teshuvah and personal confession such important considerations in your vision for this action?

After that initial point of grief and rage and pain, I asked myself why we hadn’t made more progress. And part of the answer was that we have turned away from Hashem, and, in return, Hashem turned away from us, leaving us to invest in solutions of our own devices. And look at the mess that we've made of the world. For me, the highest point of teshuvah was about making repair with Hashem and humbly admitting that we have been too proud and too certain of ourselves.

Part of turning away from Hashem was forsaking the values of Torah and how we treat one another as a community. And that too was an egregious offense. Getting in right relationship with Hashem requires getting in right relationship with one another. And that process includes confession and admitting where we missed the mark, where we've caused harm to others and to ourselves so that we can get back on the right path of correcting and repairing 4 centuries of harm to Black and Brown people.

What are some of the sacred Jewish texts that inspired this action?

The grounding inspiration was a text from  Isaiah 58:1: "Cry from your throat. Do not hold back. Lift up your voice like the shofar, and show my people their transgression, and the house of Ya῾aqov their sins." We have to lift up our voices and let a great cry go up to Heaven to make our suffering known, that we are in pain, adrift, in need of help.

In watching the film about the action --  “40 Days of Teshuvah” -- the crying out felt to me like a release of soul and spirit to the universe. How did it feel to you?

It was very cathartic. We blew shofars. We screamed. At one point in the circle, I pointed out there's nothing left to say. All that there is left is to cry out, to feel the pain. Too often in life, a numbing sets in and we are encouraged to accept the status quo, to try to salvage what we can of our lives.

For me, the transatlantic slave trade and these 400 years of oppression are an outcome of us turning away from Hashem, embracing baseless hatred, ignoring the suffering of one another -- the widow, the orphan -- symbols of those most vulnerable in our society.

If we don't have a higher power to be accountable to, then any kind of behavior and treatment of each other seems permissible and justifiable.  When you're not in relationship, you're not accountable to something higher. I say, even if you yourself are suffering, you still have an obligation to help others when you can. The slippery slope of being self-consumed leads to baseless hatred, the reason the rabbis gave for the destruction of the Temples.

How do you respond when people ask you what you actually accomplished with this 40-day action?

Before systemic change can be realized, we must transform ourselves. Too much of the political education and anti-racism training that I've been a part of has been primarily intellectual -- Let's talk about ideas for a few hours, think about it, and see you next time. Our lived experience tells us that just thinking about how to be an anti-racist doesn't actually translate to change on the ground. To build stamina and the commitment to carry on the struggle, we need to work on ourselves emotionally and spiritually on a daily basis.

Do you follow a daily spiritual practice that grounds you in your social justice work?

My daily practice includes Musar, a Jewish discipline to build character. I do some prayers from the Jewish morning liturgy plus personal prayers in which I just speak from the heart to Hashem about what I need guidance and about my gratitude for all the support I have received. I also say the Ten Commandments twice daily, which for me is the foundational piece of what it means to be in right relationship.