The Song of the Sea and Shabbat Shirah 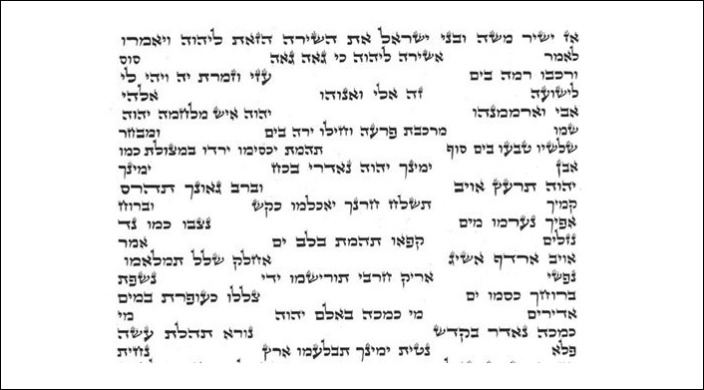 Shabbat Shirah is on January 30th this year, and is another name for the week we read the Torah portion called B'shalach. In this portion, the Israelites have just been freed from Egypt and we read about the splitting of the Red Sea. Following this miraculous event, we find the first "song" in the Torah: Song of the Sea, or Shirat HaYam. The text changes from looking like typical prose, something like this article looks, with paragraphs and tabs, to a special symmetrical arrangement of text that we recognize as a poem or song. The text for this song resembles wavy lines, and is thus reminiscent of the rolling waves of the sea.

One might also observe that the melodies used to chant this Song of the Sea are different than those we use regularly to chant Torah, and might be considered more joyful and lyrical, which is another way to set this portion apart from the rest. Thus even those who don't have the opportunity to see the visual reminder by reading from the Torah know that this is a special section by merely listening. The song is introduced by the narrator, so to speak, in our regular Torah trope melodies: "Then Moses and the Israelites sang this song to Adonai. They said…" The voices and words of the Israelites use the festive melodies to which I refer halfway through the first sentence: "I will sing to Adonai, for Adonai has triumphed gloriously; Horse and driver Adonai has hurled into the sea. God is my strength and might [or 'song']; God is become my deliverance. This is my God and I will enshrine God; The God of my father, and I will exalt God." (Translation adapted from the New Jewish Publication Society (JPS) Translation, 1999 Second edition). Listen as I chant Exodus Chapter 15 verses 1-3.

Another unusual aspect of the portion is the prominent mention of a woman; we learn that Miriam, the prophetess sister of Moses and Aaron, takes instruments and leads the Israelite women in song and dance to celebrate. I'm often reminded of Miriam when I chant "Mi ChamochahMi Chamochaמִי כָמוֹךָLiterally, “Who is like You?” Verses from Exodus 15:11 that are incorporated into the prayer service. These verses are an excerpt from the song that the biblical Israelites sang after crossing the Sea of Reeds to safety. " (which happens to come from this portion, and can be seen at the bottom of the image of Shirat HaYam) in services every week, celebrating the exodus from Egypt and the splitting of the sea in song. Although Miriam's name is not mentioned in traditional versions of the evening Mi Chamocha, the newest prayerbook of Reform Judaism, Mishkan T'filah, adds her in: "Your children witnessed Your sovereignty, the sea splitting before Moses and Miriam."

As a female cantor, I particularly appreciate the addition of at least one of our Torah's female role models back into the story of the Exodus, and even more so because of Miriam's musical bent. On Shabbat Shirah, Miriam's dances and song are considered key enough to pair the Torah portion with a parallel reading from the Haftarot, which also includes a song and two prominent women, one of whom is Devorah. In that Haftarah portion from the book of Judges, the Battle of Israel is led by Barak who is spurred on by Devorah, also a prophetess, but even more importantly, a judge and leader. At the end of the battle, Devorah sings a song of praise to God and the heroes.

The sages from the time of the Talmud wrote of a total of 10 songs sung to God in Tanach (Torah, Prophets, and Writings). We have nine of those songs; the first refers to the beginning of creation (though it is found in Psalms), and the tenth is prophesied for the Messianic Age. Traditional Jews might say that all of time, as described by Judaism, is encapsulated through song. Some even say that these ten are the only true songs. As a modern Jew who is also a musician and great lover of music of many eras and styles, I find that concept a bit stultifying, but must admit, as a cantor, that it also gives me a bit of pride in our Jewish musical tradition.

The Song of the Sea and the Song of Devorah, two of these important ten songs of our Jewish history, are why we refer to the Shabbat of portion B'shalach as "Shabbat Shirah," or the Sabbath of Song. Shabbat Shirah is often celebrated with special musical aspects beyond the beautiful and meaningful music used regularly in Shabbat services. Consider attending a synagogue's Shabbat Shirah events this Shabbat, both to listen to its special chants, and to sing along like Miriam and the Israelites did on the shores of the Red Sea.

A version of this article first appeared in the Bulletin of Congregation B'nai Yisrael of Armonk in February 2006.

Hayley Kobilinsky is Cantor of Congregation B’nai Yisrael of Armonk, NY, where she has served for the past eight years.  Hayley is also an adjunct professor at the Hebrew Union College’s Debbie Friedman School of Sacred Music, and is President of Kol Hazzanim – Westchester Community of Cantors.