A vegan or plant-based diet is one that is free from all animal products, and vegan foods are parevepareve(פַּרְוֶה (יידישFood products that are made with neither meat nor milk products and therefore, according to customary kashrut practices, can be eaten with either. Produce, grains, fish, and eggs are considered pareve. The word also is used colloquially to mean “neutral” or “without strong opinions.” by nature. The reasons people choose to enjoy vegan foods are many.

First and foremost, they taste incredible. People also turn to vegan foods for weight-loss and disease prevention. It seems that every week there are new studies and testimonials published about people who have regained their health by dropping their cholesterol levels, losing weight, and coming off heart and diabetes medications by including more plant-based foods in their diets. There are now numerous studies demonstrating that many serious illnesses, such heart disease, obesity, and diabetes can be prevented and reversed by enjoying more vegan foods.

Want to be Earth-friendly? In addition to providing an out-of-this-world culinary experience, eating vegan foods also happens to be one of the most effective steps we can take to protect the environment. The UN's Food and Agriculture Organization estimates that meat production accounts for nearly a fifth of global greenhouse gas emissions -more than the entire world’s transportation industry combined. Others turn to vegan foods out of compassion and sensitivity to suffering of the animals, especially those raised through factory farming. Whatever your reason for having enjoying a vegan meal, there is no need to compromise on flavor - an exciting culinary universe awaits!

This dish evokes many childhood memories where we would lovingly defrost the frozen blintzes with great fanfare and reheat for a special meal. To make them from scratch, and to make them vegan, was a true revelation. Of Slavic origins, blintzes are part of the Eastern European culinary tradition. Many fillings and toppings are possible for both sweet and savory versions. Here is one of the most popular. For a healthier blintz, you can leave out the sautéing at the end. Serve at your next Hanukkah party along with latkes and vegan sour cream.

Replace the blueberries with strawberries, peaches, mango, or your favorite fruit.

Mark Reinfeld is a multi-award winning chef and author of seven books, including the best-selling 30 Minute Vegan series and his latest book, Healing the Vegan Way. Mark has over 20 years of experience preparing creative vegan and raw cuisine. Since 2012, he has served as the Executive Chef for the North American Vegetarian Society's Summerfest. He has offered consulting services for clients such as Google, Whole Foods, and Bon Appetit Management. Mark was the founding chef of The Blossoming Lotus Restaurant, voted "Best Restaurant on Kaua'i." 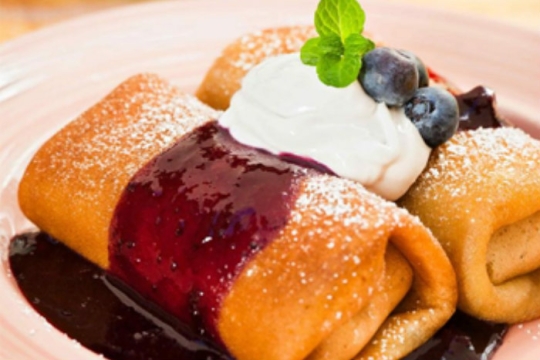 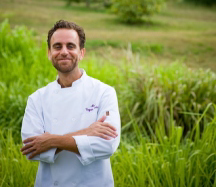